A friend in Canaan suggested that the Warriors of Light visit King Argus, but when their ship lands there, they found the castle completely empty. Meanwhile, the city of Tokkul is being raided by mysterious brigands, who come from a flying castle, but the Warriors of Light cannot get to that fortress either. The only thing left to do is to cross the desert and visit the Village of the Ancients, who probably know something about the Light Crystals.

The Ancients are quite disappointing. Instead, they tell you how the Light Crystals were threatening the World and four Warriors of Darkness turned them off. But you're the Warriors of Light; are they trying to persuade you give up the video game? One little thread starts from their village, though: someone suggests that the Warriors of Light visit the Gulgans in their home valley.

Complete Bestiary
If you want to complete the Bestiary, be sure to hunt all the sea-based enemies, ssince you can only travel the seas for a limited time!

You can go back to Castle Sasune and start the Fix Sara's Pendant Quest or finish the Save the Children Quest if you are level are 13 or higher. There are several places that you can visit now but first, we're gonna grab some loot!

From Nepto Temple, sail northwest until you come to a peninsula. Disembark and head a very short distance west to find Castle Argus.

Enter the castle and you'll find that it's empty...may as well grab some loot! Go inside and head all the way upstairs.

Once on the top floor, go to the weapon rack northeast of the round table, then through the wall just south of it for two chests with Antarctic Wind and Bomb Fragment. Head east between the chests, through another secret wall, to find another chest containing Arctic Wind. If you need to heal or revive, head out the south door for a two wellsprings.

There is another secret passage, but there is nothing useful in it at this point, so we'll come back to it later.

Since you couldn't meet the King of Argus, head to Tokkul.

Chocobo Woods
On your way to the Village of the Ancients you may notice an odd little circle area surrounded by plains within the woods. If you walk there you will enter the Chocobo woods! Walk up and interact with a Chocobo to take a ride. While riding you can move around the overworld quickly, without random encounters.

From Castle Argus, follow the coast southwest until you come to the village of Tokkul.

Enter the village and search a tree in the northwest corner of town to find a Lamia Scale. South of the tree is a searchable crate with a Great Bow. Southeast of that crate is another crate with Bacchus's Cider. Go east and search along the tree line for an Ice Staff.

Once you've stuffed your pockets, exit Tokkul and trek west on foot until you come to a shoreline. Follow the shoreline south and then west across a fairly narrow strip of land to arrive at a forest. Walk a little further west and you'll find the Village of the Ancients.

As usual, items in italics should not be purchased, because they can be found for free. 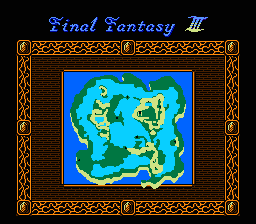 Map of the floating continent, visible using either the "Sight" spell or a Gnomish bread (NES version).

Once inside the village, go up two sets of stairs, then go west around the wall to talk with a child. He will give you a prize of Gnomish Bread if you run the outer ring of the continent on a Chocobo and then return to him. It doesn't take very long, and you won't have to fight any monsters, so consider taking him up on his challenge if you're hard up for Gnomish Bread. After you're done playing with birds, check the white flower north of the well near the Inn for a Serpent Sword.

Head to the item shop and buy some Maiden's Kiss; you'll need them soon. Buy anything else you may need here. The Light Staff is a good buy if you're playing the 3D versions of the game.

Once you've had your fun grabbing loot and playing with Chocobos, head back to your ship and sail to Castle Argus. From Argus, head west until you run into a mountain range. Follow the mountains north, then southwest at the branching path. The northwest branch leads to another Chocobo woods. You should see a cave just to the north, which is Gulgan Gulch.

Go in and downstairs. Talk with the Gulgan in the middle and he will give you the spell Toad which you will needed in Tower of Owen, where you'll go next. He will also tell you that Desch's destiny lies within the tower. Go south through a secret passage to three chests, which containFire Staff, Ice Staff and Mage Robe.

After meeting the Gulgans head around the mountain range to the north and grab a Chocobo if you want. Now head to the Tower of Owen. The easiest way to get to the tower is to follow the shoreline north from Castle Argus.

The first floor of the tower is B1. It is a large square so head around either way and take the small path to a room in the center (See Kowega's map to the right if you get confused. Some of the loot is wrong for the remakes but the shape is correct). Turn your party into toads and enter the room to get to F1.

Once you land on the F1 go ahead and un-toad yourself. Follow the path to F2.

On F2 go west, then south, then east for a chest (Echo Herbs) then head west and north to F3.

There is no loot on F3 so follow the trail around to F4.

On F4 head west then south, make a quick detour east for a chest (Spark Dagger) and continue west to F5.

On F5 head west until the voice taunts you then double back and check the tiny path to the north to find a switch. Hit the switch and head south through where there was a wall previously. Head west, but ignore the stairs; instead go all the way west then north for a chest (Echo Herbs). Take the stairs to F6.

F6 has no loot so follow the path around and take the stairs to F7.

On F7 head east and grab the chests (Echo Herbs and Bomb Fragment), then follow the path west to F8.

On F9 follow the path, at the first split head east for a chest (Salamand Sword). Follow the path west to the next split, and take the northern path for a chest (Flame Mail) Head south past the way you came from, then east to grab the chest (Zeus's Wrath). Prepare for a boss fight! When you're ready, take the stairs to F10 and the boss. 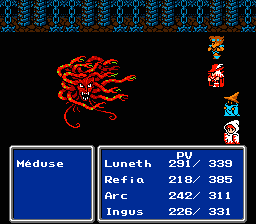 Medusa is another fairly straightforward boss fight. Have your attackers attack and your mages cast. Be sure not to get too low on health as she'll occasionally cast Blizzaga, which can do a fair bit of damage to your entire party. If you get petrified, use a Golden Needle.

After the fight, you'll find yourself back on the Enterprise and the Maelstrom blocking the way to the Dwarf Islands will subside.

The items in the Tower of Owen are different: