After gathering with Arc, Refia and Ingus, Luneth would start the quest to restore the Light Crystals, but the earthquake caused a landslide to block the exit of the valley. Moreover, it also unsealed the evil Djinn from the Sealed Cave, and he cast a curse on the people in nearby town. The Warriors of Light need to lift the curse, because they alone could't free the exit of the valley.

At this part of the game, you start gaining the rest of your party members. In the NES version, you started the game with the full party already. In the 3D versions of the game, each character is introduced in a cutscene.

In the table below, "NES" is the cost in the Japanese Famicom (NES) version, "3D" the cost in the remake. Items in brackets can be found for free, therefore there is no need to purchase them here. Items in green are recommended for purchase, instead.

Phoenix Down
Unlike most other Final Fantasy games, you cannot buy Phoenix Down in Final Fantasy III. It must be found in chests or stolen from enemies. If you are playing the 3D versions of the game, you can get an extra Phoenix Down by talking to the old man in blue near the elders' house in Ur and giving him a potion when prompted. In the NES versions you are simply given Echo Herbs for your assistance.

After arriving on the world surface, walk south until you reach a village. This is Ur, your hometown. If you talk to the first guy you see, an old man in blue, he'll tell you that the elders are looking for you. Go into the building directly behind him, and speak with Elder Topapa.

After speaking with the Elder, take a small detour and grab some hidden items. Go north until you see an old man in orange. Run past him and find a house hidden way back in the forest, but watch out for monsters on the way. Check near the water for a Potion. The old man inside will give you a monologue about hidden switches and examining stuff. Zoom in and interact with any objects that sparkle.

Two of the pots to the left each hold Antidote, and the rightmost candle is actually a switch. Interact with it and a door will open to the right of it. If you take the stairs, you'll see five treasure chests: loot them for Cure, Phoenix Down, Dagger, Eye Drops and Longsword.

Returning to the center of town, take a path leading northeast to find your next party member, Arc. Rename Arc, if you wish, and then watch him run out of town. Check the Water near where Arc was for a Potion.

It's almost time to take your leave of Ur, but first, take a path leading east from the inn to a well. This well contains three Potion.

Now, exit Ur and travel south until you come to the next town...

The Airship
This is the first of many times that you obtain an Airship. This vehicle allows you to move around the world surface without encountering enemies. You have it for now, but don't get used to flying around like this. Hint hint.

When you enter Kazus, you'll see Arc up ahead. Talk to him, or at least try to, in order to progress with the plot. After that, start exploring Kazus. The town is basically deserted: no one's outside, and everyone inside the buildings seems to have become mere outlines of people.

On top of that, no one in the shops will sell you anything. To get to the bottom of this, head to the inn and talk to the outline standing by the left-most counter. The outline, who is actually Cid, will give you his airship to help you lift the curse that seems to have caused everyone to become outlines.

Go in Smith's House northeast and check the vase for a Potion. Check the bookshelf in the Inn for another Potion. Now go around the wood to find a pond and three hidden treasures: Mythril Helm, Staff and Zeus's Wrath.

Mine
Don't enter the Mine, as the monsters there are too strong for you right now.

Head west to a patch of sand west of Kazus to find the Airship. Walk inside and prepare to meet your next party member, Refia (her default name). After talking with her, your objective becomes clear: Head to Castle Sasune to retrieve the Mythril Ring! To reach the castle, fly northwest until you see a fortress-like structure - Castle Sasune. Park your airship and go inside.

If you try to return to Kazus with Refia, she will stay outside. She won't go back into town until later in the game.

When you arrive, walk up to the castle gate and talk to the man standing there. He's Ingus, your fourth party member. After talking to you, he'll decide to let you go talk to the king, and enter the castle.

After entering, go straight forward until you enter the room where the king and Ingus are. Walk up to them to learn about the curse and how to lift it. Unfortunately, the ring you're looking for seems to have disappeared along with King Sasune's daughter, Sara. You're instructed to go to the cave in the north and look for Sara with the king's man, Ingus, who now joins your party. Now your last party member has joined you.

Before you set foot into the Sealed Cave, there are two weapons found in Castle Sasune which save you a lot of stress. You must acquire the Whightslayer and the Bow and Holy Arrows before you leave.

There are three parts to the castle: the central keep, the west tower and the east tower. In the main castle, some of the side walls appear different from the others. You can walk through these to get into other rooms. Go downstairs twice from the King's Chamber and go through the left wall for a Phoenix Down.

Then go through the right wall and upstairs. Go around to find two chests with Leather Shield and Blizzard. To the left of the two chests is another hidden wall you can walk through. Go north, then east to find one chest holding Bronze Knuckles. Go down two sets of stairs and grab the 2000 gil from two chests.

Before setting foot into the West Tower, know that it is infested with Undead. Have a character equipped with the Bow and Holy Arrows and place them in the back row. Another character should be set with the Cure spell found at Ur, which will usually destroy any Undead monster with one spell charge. Front line fighters should have paired Longswords and Bronze Knuckles.

Before opening the chest, make sure your party is above 50% HP and at least one person has the Blizzard spell and full MP. Put your caster and whoever is equipped with the Bow in the back row.

The last floor holds one chest, with Wightslayer, which is guarded by a Griffon monster.

In the original NES version, this enemy was not a boss. In fact, it had neither the boss music nor the boss animation.

At the earliest opportunity, have one character use the Zeus's Wrath found in Kazus. A character capable of casting Black Magic should cast Blizzard every turn, as the Griffon is weak against cold. Front-line fighters should attack with two weapons such as the Longswords and the Bronze Knuckles.

A trip up and down the West Tower should leave you with at the very least a Level 5 party. Rest at one of the beds in the castle. With Cure, Holy Arrows, and the Wightslayer, you may travel to the Sealed Cave. Once you're ready to enter the cave, get onboard your airship and head north to the cave across from the lake. Make sure you save!

The monsters in the Sealed Cave are fairly powerful, moreso than the monsters on the world surface. However, they are undead, so they are harmed by Cure spells and are weak against Holy element, which is present in the Wightslayer Sword.

If you find yourself getting pushed around by the common enemies, return to the surface and get your characters to about level 6 or so before returning. The treasure in Castle Sasune can also help make your characters stronger, if you didn't already loot it.

When you enter the Sealed Cave, you find yourself in a large chamber. Walk straight ahead, and follow the curving path until you arrive at a two-way split. Keep traveling forward to find a chest (Potion), then return to the split and take the other path to travel deeper into the dungeon. Follow this path until you reach a path that leads off into a small chamber with a chest (Spell Cure). After this, continue to follow the path to a set of stairs.

In the next cave go southwest for a chest (500 gil). Then go to the skull at the northeast corner. Zoom in and you see that it shines. Activate it and the wall will open up. Continue along the path and enter the next room, where Princess Sara will join the party. Continue into the next room. With

you can speak with Princess Sara if you wish to do so.

In pre-Islamic Arab culture, the djinns were elemental spirits associated with the air/wind, while the fire-elemental spirits (like this Djinn-Boss) were the efreets/ifrits. The other two elementals were marids for the water and ghouls for the darkness. 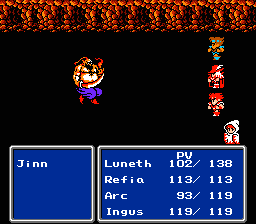 The quickest way to defeat this boss is to use two Antarctic Winds since they do 350 damage. However, there is alternative which uses one less item: Cast Blizzard, Use Antarctic Wind, attack with Wightslayer , and have your White Mage heal.

With the djinn beaten, Sara will seal it in the Mythril Ring. You will then be transported to Altar Cave, at which point you will receive your mandate from the Crystal to save the other three and stop the coming flood of darkness. You will the be empowered by the Crystal's light and anointed as the Warriors of the Light.

After the boss: Wind Crystal jobs[edit]

Once the credits finish, a Moogle will briefly explain class changing.

Change the jobs of your party any way you like. For more information on the six first jobs check the Job List.

Mognet
With the Victory over Djinn the Moogles will start appearing in villages. Check Mognet for more info.

Step on the portal north of the Crystal to be returned to its entrance. Save. Return to Castle Sasune where Princess Sara awaits you. Princess Sara will throw the Mythril Ring in the Holy Spring under the castle and the Djinn's curse will be lifted.

The King of Sasune will thank you, grant Ingus leave to fulfil his mandate to the Crystal and award you with a Canoe for crossing shallow inland waters. Now, you must go and check on the people of Kazus.

In the NES version, the first five jobs are unlocked far earlier than here.

The biggest difference is that the man in Ur exchanges your Potion with an Echo Herb instead of a Phoenix Down. An Echo Herb just cures the "Mute" status, so it's far less useful.

The bow and the arrows can be used by some Wind Crystal jobs, but the arrows are consumable, so you would have to buy more if you run out. You can save the arrows and your money for the Ranger, which is the job specialized in using this type of weapon. On the other hand, enemies weak against the Holy element are found in three dungeons only throughout the game.

There's no need to purchase the items in brackets because they can be obtained elsewhere.