Luneth and friends were on a quest to restore the light of the Crystals, but are lost with no clue as to where to go. The only option is to visit the hidden town of the Gnomes and calm down the sea god Nepto. After all this trouble, they are rewarded with a mighty ship, that will allow them to continue on their quest.

Now that you're out of the nest, it is a good idea to save and equip one of your characters with the Mini spell. After you've saved, walk to the forest in the southwest. In this area there are 3 different Springs surrounding a gnome. One spring revives any fainted characters, another restores HP/MP, and another cures all status ailments. Speak to the gnome here to receive up to 5 Mini spells. Use the Mini spell you just got to cast Mini on the entire party. You should also change your physical-based jobs to magic-based jobs, since your physical attacks won't work well while suffering from the Mini status. Leave the Healing Copse and walk south to enter Tozus.

Fire Staff
If you use the Fire Staff in Battle, from the item menu, you can cast Fire. Have your White Mage use it instead of Aero and save MP for healing.

Once in Tozus, go to the house in the northwest corner and talk to the man lying in bed. Give him an antidote and he will open a secret passage as thanks for your help. Before going into the secret passage, check the room for hidden loot! Mythril Bracers, Fire Staff, Fira and Cura are hidden in the bookshelves, pots, and tables in the house.

You may also want to buy some spells for your mages before continuing but when you're ready head down the secret passage!

Open the two chests (both Phoenix Down) and go down the stairs. Walk through the passageway until you are on the world map. Don't un-Mini yourself just yet! Save, then enter Viking Base to the northwest.

Ship
Don't go on the Ship! If you do you will meet the sea dragon, which is too strong at this point, no matter what level you are.

As you enter the main room, go east from the man laying in bed to the wall, then south through a hidden passage with a chest containing a Spark Dagger. On the north end of the cave, the door to the right of the stairs leads to an Inn and two shops: an Item shop and Magic shop. Buy anything you need and leave this room then go up the stairs to the west. Go west, then south through a hidden passage at the end of the path, where you'll find two chests (Viking Axe and 3000 Gil), and a spring that revives any fallen party members.

Go back through the hidden passage and east to the Moogle. South-southwest of the Moogle is a secret passage to a room with three treasures (Fira, Thundara and Blizzara). Leave the passage and continue east, then south and talk with the Viking leader. He explains that the Nepto Dragon at the water temple has been on a rampage, and offers you the ship Enterprise as a reward for abating the dragon's wrath. Go north and exit the Viking Base. You'll come out on another part of the world map with a ship nearby, but do not try to board the ship. Instead, walk north along the coast until you reach a temple.

Enter the temple, walk north and interact with the dragon statue. The party will notice a gem missing, and mention that the mouth of the statue could be entered if Mini is cast on the party, Cast Mini on everyone and enter the statue's mouth. Once inside, walk east until you get to a small room with two holes. Walk into the western hole for two chests containing a Shell Helm and Shell Armor. Head up the stairs to leave, then enter the eastern hole. Once in the hole, walk east, grab the chest with a Serpent Sword, and continue east into the next hole. Continue east and you will get pulled into a fight with the Giant Rat. 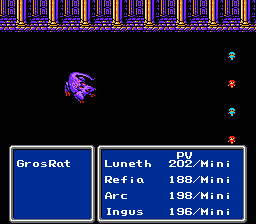 With your party of mages, simply cast level 3 and level 2 spells, and heal as needed to make short work of the Giant Rat. After your victory, you will obtain the Nepto Eye. Return to the temple entrance and examine the statue again to place the Nepto Eye back in its rightful place.

The Nepto Dragon will thank you for your help and reward you with the Fang of Water. Un-Mini yourself and go back to the Viking Base. Talk with the viking leader, who upholds his promise, and bestows upon you the ship Enterprise. Now you can go anywhere in the Inner Sea.