Final Fantasy III's job system is at the core of your party. The jobs your characters take determine their stats, the equipment that they can use, and the magic or special skills they obtain. Jobs can be changed at any time, and you will gain more jobs as you advance farther into the game.

As you fight battles, your job level will advance. At job level 99, you can seek out the wandering smith, who will grant you a special item exclusive to your class along with a card that proves your prowess.

In the Level 99 item entry, only the most prominent special feature is listed, in order to keep an easy readability. For further details, check the Weapons and Armors pages.

This job is available from the outset of the game.

Freelancers are the starting job for all four main characters. They cast basic attack and support spells and can also attack moderately well. However, in the way of usefulness, Freelancers become second best after you obtain new classes from the Crystal of Wind.

These jobs are obtained after you find the Crystal of Wind.

Warriors are the first heavy-duty job you obtain; they can't use magic, but they excel in taking and dealing damage. Their special skill, Advance, allows them to deal extra damage but makes them more vulnerable to attack. Warriors, though strong, will lose out later in the game to even beefier jobs such as Knights and Vikings.

Monks wear light armor, but they pack a hefty physical punch to make up for their low armor. This job can counter-attack with Retaliate if hit by a physical attack, which also makes them take less damage similarly to guarding. However, Monks can be replaced with Black Belts, who basically mirror Monks but have better stats. Both give high HP. Attack goes up 2 for each job level up.

White Mages can use all but the last level of White Magic, which makes them useful healers for much of the game. They also have a few attack spells, which deal light and wind damage. However, you may want to replace them with Devouts to obtain the Level 8 spells, which are useful in the final dungeon.

Black Mages are the magical opposites of White Mages. Their elemental and status-causing spells are great for exploiting elemental weaknesses or disabling an enemy. As with White Mages, the only reason you might change from a Black Mage to a Magus is the Magus' mastery of Level 8 Black Magic.

Red Mages are great multi-taskers: they use both Black and White Magic (though they can use less levels than Black or White Mages), AND they have good attack power. This makes them quite versatile. Later in the game, however, the Sage can take their place in the party.

Thieves are fast, and often act first in battle. They can steal items, usually common store items, from enemies, and use Flee to run away from battle without taking as much damage. In addition, Thieves can unlock doors if placed first in the party. However, the small variety of items they can steal weakens them somewhat.

These jobs are obtained after finding the Crystal of Fire.

Knights are like advanced Warriors; however, their stats are a little better, and they can use Level 1 White Magic. However, part of the real value of the Knight is the tendency to defend others whose health is low. This can allow them to keep a weaker character alive long enough for a heal.

Rangers use ranged weapons exclusively to attack. Their special skill, Barrage, allows them to fire on 4 enemies simultaneously, though the damage is reduced. However, the Ranger may lose out to other classes whose attacks are more powerful.

Scholars, at first glance, seem similar to Red Mages. However, their attack is less, and they can Study enemies. Study is similar to Libra: It tells you the enemy's HP (though not for bosses) and their weaknesses. It also removes any beneficial magic on the monster. Scholars are fairly useful when you fight Hein; however, there are eventually spells that can do the job of Study. Scholars also have very little MP, which prevents them from being effective mages. To balance that, Scholars get twice as much damage from attack items.

Geomancers are fun to mess with. Their skill, Terrain, produces a magic attack. The attack's targets and element depend on the terrain you're fighting on. The damage of the attack, not taking into consideration elemental weaknesses, is proportional to the job level of the Geomancer, so it's probably best to level up your Geomancer if you plan on keeping them in your party long-term.

These jobs are obtained after finding the Crystal of Water.

Vikings are by far the most physical job there is. They're best for the front row, due to power and defense. However, Vikings are slow. They can replace other physical jobs, and take in damage because of Provoke. Also, they have high HP. To note something, all hammers have a thunder base.

Dragoons are a physical class with good armors, but their weapon selection is rather narrow. However, Jump increases their physical power by a large chunk and allows them to evade attacks. Keep in mind, though, that Jump will also evade healing and support spells, which could prove fatal if you lack the Knight and your luck is poor.

Dark Knights have poor defensive skill, but have excellent attack power, and possess two very important features. First, katanas do double damage against enemies that divide AND will prevent the division from even happening. This makes having at least one Dark Knight all but required for a particular dungeon. Second, Souleater does a large chunk of damage on all enemies...and clips off a bit of your own HP to do so. If you want to take advantage of Souleater, you'll want to have plenty of Hi-Potions or white magic MP ready.

Evokers are similar to both black and white mages combined and have a lot of MP. Their spells usually have two sides: a multi-target support/debuff effect ("white") and a single-target direct attack ("black"). How many times did you ask yourself: "Should I attack one enemy or stun all of them?" or: "Should I heal my heroes or attack one enemy"? The Evoker takes these dilemmas from your hands and decides on his own; anyway, don't expect complex artificial intelligence: it's just a coin flip. A philosophical Evoker could say that the problem was not worth long thoughts!

Bards can use harps, which have added effects and use Intelligence, rather than Strength, to determine damage output. Not only that but if a Bard is holding a harp, he or she can use Sing, which has a different effect based on which harp you use. The song can increase offensive power, heal the party, or do a bit of damage.

These jobs are obtained after finding the Crystal of Earth.

Black Belts are powerhouses when it comes to raw physical attack power, but like Monks have limited armour selection, sometimes giving them lowered defense and magic defense. Black Belts make up for this flaw with high strength, vitality, and moderate agility, and their special ability, Boost. Boost allows them to charge up power for your next attack and can be used successively to boost your next attack further, but can damage your character if you use it too many times in a row.

The Magus is basically an enhanced version of the Black Mage. They can cast all Black Magic spells and have more MP for higher-level spells than either Black Mages or Sages.

What the Magus is to the Black Mage, the Devout is to the White Mage. Devouts can cast all White Magic spells and have more MP for higher-level spells than White Mages or Sages.

The Summoner has higher attributes than the Evoker, but his magic is extremely monotonous. In fact, all his spells do the same: they simply deal damage to all the enemies, with just different elements.

The Ninja is a good physical fighter, using close and long range weapons. In the Famicom version Ninjas were known to be able to use every weapon in the game, but still they have just two hands. That means: they can just use two weapons at the same time. Weapon selection is much smaller in the remakes, but most of the weapons with special effects or abilities are still available: swords, daggers, katanas and thrown items. The famous thing people would say is: "Ninjas throw shuriken". Yes they do: throwing one equals 10000 in damage, but says 9999.

Although a physical job, the Ninja can stay in the back row. Equip the Ninja with a full Crystal Armor set and a Moonring blade, and he can attack with no penalty. If his HP get low, equip him with a Blood sword and an Orichalcon knife to absorb enemy HP. During boss fights, make him throw shurikens from the back row.

Sages are master wizards who can use every spell in the game, but with that comes lower MP. Their Summon spells are the same as the Evoker's.

The secret job Onion Knight can only be obtained by carrying out a Mognet sidequest called "Save the Children".

The Onion Knight can equip every normal weapon (excluding ultimate weapons), and every Black and White Magic spell. However, their stats are very low all around, until character level 92, when their stats skyrocket, eventually making them the best job in the game. 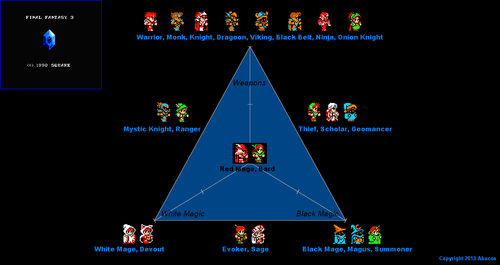 This Character Class Triangle summarizes the abilities of the characters, based on their skills.

In the DS remake, some characters were "moved around" in the diagram above:

Each job has a specific attribute growth. The following table shows the average attribute growth per level in the original (left) and remake (right) version of Final Fantasy 3.

Sort the table by an attribute to see who excels and who is weak in that attribute.

At any time during the video game the party needs to include at least one job with healing skills and one or two jobs with good physical attributes.

In the original NES version many jobs have different abilities, as shown in the table below. Jobs that were significantly modified in the DS remake are higlighted in bold.