Complete the Bestiary
You cannot encounter the mobs in the open ocean after your airship is destroyed. You probably encountered most of them on the ocean of Floating Continent already, except for Sea Dragon. This is a rare encounter and very easy to be missed. Make sure you've encountered it before flying over Saronia 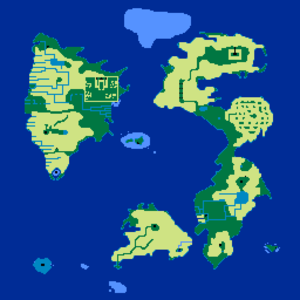 After retrieving the airship from Goldor's clutches you are free to search the world for the Earth Crystal. There are actually less destinations available to explore that you might think.

Head over to next chapter if you want to explore the other towns. You may want to make a quick detour to Duster to buy a few Feathered Hat, which boosts Agility and could therefore be useful in an upcoming battle. Otherwise, head straight to Saronia.

From Amur, where your ship was anchored, travel north along the coast, then keep following the coast westward. When you get to the westmost peninsula, cross the sea. You can't miss Saronia: just look for the large area of gray. You cannot land here, and the gate to the area surrounding the castle is closed. Fly towards the castle, where you will be rudely forced to land.

You aren't able to enter the castle for now, so explore the towns surrounding the castle. You can get into battles in the wooded areas, which is a good place to raise your job levels.

In Southwestern Saronia you will meet Prince Alus, who joins the party. Talk to two old men after Prince Alus joins your party to get free Dragoon Armor and Wind Spear. Turn one of your characters into a Dragoon and equip these items. In a house you can summon the Fat Chocobo for free as many times as you want. There is also a secret passage that leads to 11 Gysahl Green. Take note of the revival spring in the west part of town in case you lose anyone in the Dragon Spire.

In Northeastern Saronia, you will learn that King Gorn has ordered all of the item shops to be closed. All magic, armor, and weapon shops keep their doors shut tight... except for one, who has defied the kings' order. Visit this shop to purchase extra Dragoon weapons, if you wish. You will find four spears later, but you can also buy extras to equip in your Dragoons' offhands for extra damage. There is also an Inn and general item shop here, if you need to rest. Thankfully, the Item shop was not forced to close down under the king's decree. Be sure to stock up on healing items, especially Gold Needles, Antidotes, and Eye Drops here.

There is another Inn and Item shop in Northwestern Saronia. There is also a large library at the northern end of town, but you aren't able to enter it yet.

People in town talk about the king; the King's aide, Gigameth, whose shadow bears resemblence to Garuda; and that only Dragoons can defeat Garuda. This is a hint for your party composition for the upcoming fight.

In Southeastern Saronia is the Dragon Spire, which is your next stop. There's also a Chocobo running around in the northeast part of town that you can ride around Saronia, if you're tired of walking to the four surrounding towns.

At the top of the Spire, there is free equipment for a party of four Dragoons, considering you've also accepted the gifts from the old men in Northeastern Saronia: four Dragoon helms, three Dragoon armors and three Thunder spears. Change all your characters' jobs to Dragoon, and equip any shields and gloves you already own. When your team of Dragoons is ready, heal up at an Inn, save, and then head to Saronia Castle. 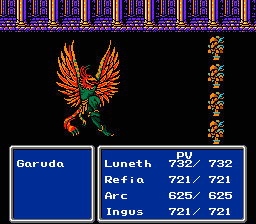 Garuda mainly casts Lightning-based spells that can devastate the entire team, or any unfortunate single party member he targets. However, if your team of Dragoons uses Jump every turn, they have a chance to dodge his Lightning attacks. With each Dragoon dual-wielding spears (especially the Wind Spear, if you can afford extra) you can make quick work of Garuda.

However, this strategy depends a lot on luck. Your entire team could jump before Garuda has the chance to attack, or they could jump after he's knocked out most of your party members. Garuda can be especially difficult in the 3D versions, since bosses attack twice per turn. Garuda could cast Lightning twice and annihilate your entire party, or do two weaker physical attacks and let you survive. If you're having trouble, try increasing your job levels in the Dragon Spire. You may also consider swapping out one of your Dragoons for a White Mage or Scholar, for extra support.

After defeating Garuda, Prince Alus becomes king of Saronia, and he welcomes you to take anything you find in Saronia to help you on your adventure. Lucky for us, there is a lot of loot to find within this very castle!

In the room on the ground floor of the castle there is a secret passage in the wall opposite to the beds. The upper floor of the treasury contains Ice Rod, Rusty Mail, Medusa Arrow, Dragon Hammer, Main Gauche, Tome of Fire, Tome of Ice, Golem Staff, Scholar Hat, Boomerang, Selene Bow, and Tome of Light.

There is even more treasure through the stairs and another secret passage on the east end of the room. These chests contain Rusty Mail, Viking Helm, Earthen Bell, Dragon Helm, Gaia Vest, and Viking Mail.

Exit the castle, and go west to another small building. There are a few Black Mages in here. One tells you that the continent Dalg is guarded by fierce winds, but that the Nautilus' engine should be able to take you through. If you are playing the 3D versions, Ingus will remark that the name "Dalg" sounds familiar to him.

There is a secret passage in the east side of the wall. Go down the stairs, then take a left through another secret passage. Descend another flight of stairs and follow the passage, which takes you to a dead end. As consolation, there are two chests containing two Phoenix Down, and a soldier who explains that the passage used to lead to an underground tunnel.

Leave the secret passages, and head to the building east of the castle. A group of engineers bestows upon you the airship Nautilus! Don't forget that it's called Nautilus! To the north of this building, you will meet the soldier who shot your old airship down.

Exit the castle to the overworld, where you will see the Nautilus waiting for you. Leave it be for now: you've got some shopping and exploring to do before we take off on the next adventure.

The shops of Saronia are now open and you can purchase some useful pieces of equipment. If you are playing the NES version, you can purchase some equipment for the Evoker: the Light Rod, the Black Robe, and the White Robe. These items are not for sale in Saronia the 3D versions of the game, but you should already have a Light Rod from earlier in the game anyway.

Items in italics may not need to be purchased because they can be found for free. The magic shop in Northwestern Saronia sells spells that you may have already purchased in Gysahl.

You can now visit the Great Library of Saronia in Northwestern Saronia. You can learn interesting backstory concerning the Wheel of Time, Desch, and how your airships rank against each other. The Legendary Smith, a woman with gray hair, also hangs out in the east side of town. Remember where she is, since you'll want to come talk to her later.

There are no shops in Southeastern Saronia; only the Dragon Spire, which is now long-plundered.

After you've spent all your money in Saronia's shops, leave on the brand-new Nautilus.

Flying the Nautilus
With a new ship comes a new instruction manual! Like the Enterprise, the Nautilus is only able to fly over grass and forest. Mountains are still too tall for your airship to safely traverse. The Nautilus as it is now cannot land on water. To land, hover over a green section of grass (or the entirety of Saronia's stone ground) and press B (Circle on PSP). You can also be attacked while aboard the airship, though encounters are somewhat rare.
Go to top
← Goldor Manor | Saronia | The Airship Nautilus →