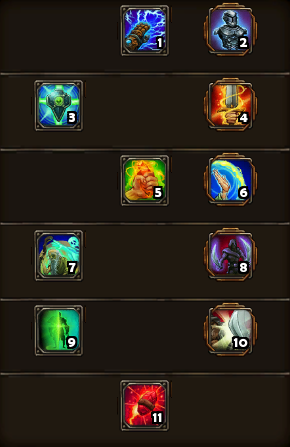 Effect: A gauntlet overload delivers a devastating charge to a single target. Power diffuses into nearby foes for lesser damage.

Effect: Mastery of all forms of armor reduces requirements and improves armor absorption.

Effect: Imbue your weapons with ember energy for increased damage.

Effect: Increases the level of all defensive magic spells. Spells can be found or bought and fall under the spells tab in your inventory.

Effect: Enfeebles Nearby enemies, reducing their armor and elemental resistances, and slowing their attacks.

Effect: Improves damage of all weapons when dual-wielding.

Effect: Phase to a new location dealing damage as you enter and exit nether space.

Effect: Increases the chance to block, either with or without shield.

Effect: A sentry crystal blasts nearby enemies with a beam of ember energy.