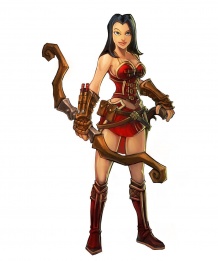 The Vanquisher specializes in ranged attacks, using weapons such as bows and guns. The Vanquisher can also learn trap skills and some melee abilities. Dexterity is the key attribute for the Vanquisher.

Each level adds 40 health and 5 mana.

The Vanquisher can spend points in 30 skills, 15 of which are unique to her (and highlighted in bold). 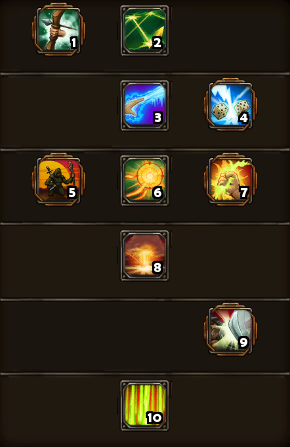 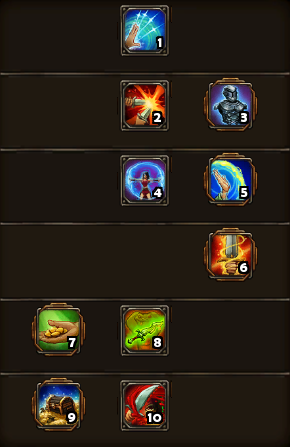 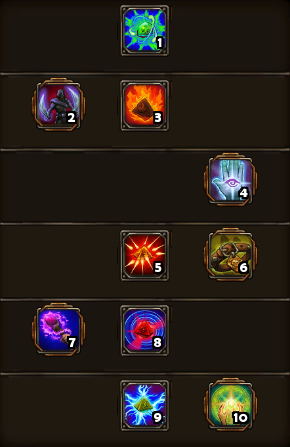 It is recommended that you max only "Ranged Mastery", "Critical hit", "Explosive shot", and "Adventurer" (this is for more xp = more levels = more skills). Be careful when putting any points in Adventurer. Because of the experience curve, you will get to assign fewer skill points to skills that influence character's combat ability. In return you improve attributes faster. However the higher the level of character, the less important is the difference in attributes, and you will regret lost skill points. Adventurer is good for a speedy game, but not for harder difficulties or builds where every skill point needs to be used wisely.

If you eventually go further than this you can max the last skill "Arrow hail" or "block and parry".

Consider not using block and parry, unless you are going for an exotic melee variant of the vanquisher. You may find it much more useful to let your pet do the tanking and shoot them from afar. These are all marksman skills. Although the electric bomb of the arbiter skill set can be useful in the beginning of the game when you don't have explosive shot. Consider only putting 3 or 4 skill points in it though, as explosive shot will become your main skill (it is extremely overpowered).

DPS, DPS, DPS. Whatever you think works best, Some prefer a fast rifle instead of two slower handguns, although the extra slots and enchantments the handguns give are indeed very useful if you are trying to get the most DPS out of your Vanquisher. A slow but very powerful rifle works better in certain occasions, as you will (if you have enough dexterity and crit) be able to one-shot most foes. This will save you potions since the monsters won't reach you. However once your explosive shot has arrived you won't be auto-attacking anymore (it costs almost no mana, is very fast, crits for like 4000 AND has an AOE of 6.5 meters). After that, go for enchantments that make you attack faster. If you don't like spamming explosive shot (it can get very boring at times) you can try to socket your weapon to one elemental damage only. For instance, if you pick ice try to enchant/socket your other items so that you get extra ice damage.

Consider giving it spells that reflect damage and trinkets that gave extra health, since your pet will take the most damage it needs high health and the reflect is useful for that extra damage to monsters. The second spell you might choose is an offensive spell like fireball. Or you could let it summon zombies or archers, always fun to just let your pet roll in with its minion army and see them take down some creeps.

That's it for this very simple, standard build, you won't be having much trouble killing stuff while staying alive. Just don't forget to upgrade your armor often.