Castlevania: Circle of the Moon/Audience Room 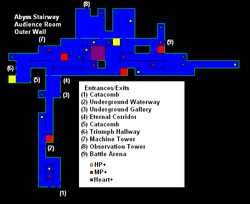 Having survived the Catacomb, Nathan begins the long trek back up to the castle. Make sure you have everything you need, and have saved (or at least recovered your HP/MP from the boss fight) and enter the Abyss Stairway from the left opening in the ceiling of the Catacomb.

Head left and begin climbing (well, jumping a lot, to be specific) until you get to the second platform in the middle of the stairwell. From there jump and whip against the right wall to open a room containing a MP Plus

(6/36) and two enemies. The Slime drops the Venus card

) and the Axe Armor drops the Mandragora card

Repeat the climbing process, but this time continue going up, into the next section of the climb. Work your way up, avoiding or killing the Bone Heads that hang from the ceilings. The second door on your right takes you to a save room, so use it if you wish, then resume climbing. When you can't climb any higher, you'll see an opening to your right, so head through.

This section is just like the previous one, except longer and there are Skeletons and Gremlins in addition to the Bone Heads. Keep climbing until the area widens. You'll see a door to the right (skip it for now) and go up to the next level. The left wall can be broken, leading to a room with a Heart Plus

(4/36) and a Skeleton Soldier, who drops Bronze Armor

Keep climbing up the left half of the stairway, and eventually you'll jump through an opening in the ceiling, into the Audience Room.

Ignore the door on the right and jump over the collapsing platforms to the upper ledge. To make it, you'll need to be jumping while at a run. You shouldn't need to double jump, and doing so can make it harder to control yourself. Once you get over, head left, and go through the door.

You'll be in a four-level room that acts as a hub to several different areas of the castle. Right now you're on the third level (right side). Drop down one level and head to the left side of the room (going down to the first level will take you back to the top of the Catacomb and a sealed off warp room). Head all the way up to the top, and break the wall on the upper most left ledge to get a Heart Plus

Fight your way past the Axe Armors and Skeleton Soldiers, until you get to the three-floor stairway. The middle door takes you to a save room, and the upper door is the one you want to go through. Before you do, break the hidden wall by jumping off the top ledge and whipping the left wall to get the MP Plus

In the large room, just head right for now. Double jump to pass by the gap with the low ceiling (make your second jump when you are in the middle of the gap and slightly lower than the top of the ledge) to get a HP Plus

Jump over the first pillar and drop down to the group. Head right and break the ground underneath the overhang to get a Heart Plus

Jump across the pillars until you see the Brain Floats. As before, use the Mercury/Serpent card to freeze them so that they can be used as platforms. At the very top is a HP Plus

(7/43). Once you get it, head back down, and drop through the gap on the right side to get back into the Audience Room.

First, head left and take the upper left exit to get into the warp room. Go through the archway and after a flash of light, you'll be back in the west side of the Audience Room. Go out and jump on the switch to destroy the barrier and then warp back to where you came from.

Head over to the right side of the long room. The upper right exit will get you a MP Plus

(8/36) and the lower right is a save room. Drop through the hole and into a long hallway. Head all the way left to get another MP Plus

(9/36), then all the way right to get back outside and start going downward. Break the wall at the top of the second set of stairs on the left to get to a MP Plus

(10/36), then continue down to the bottom of the stairs. If you head right you can get a Heart Plus

(8/36) in the middle of the rafters (you'll have to come back later for the rest), and you can fight the Clinking Men until you get a Miracle Armband

, which raises your luck slightly. If you have the Venus/Mandragora combo active, your luck will be boosted, increasing the chances of you getting an item. When you've gotten what you need, go through the lower left door.

Follow the hall way, and before you have to jump up to a ledge on the right, jump a bit and break the left wall to get a HP Plus

(8/43). Now head up and continue left, going through the door and into the large chamber.

Drop all the way down and go through the lower right door to save your game. Right in front of this door is an Electric Skeleton that, assuming you haven't already gotten one, will drop the Golem card

. It's a low drop rate, so equip the Venus/Mandragora DSS combination to boost your luck.

Once you have the card, save again, and work your way up to the upper left door. If you don't have one already, you can get an axe from one the candles on your way. Take running jumps to make it across the collapsing platforms and you'll see the glowing blue boss door. Head in to find the Necromancer, who is impressed that you've survived, and mentions that Dracula is planning on restoring his powers by sacrificing Morris during a full moon.

The Necromancer can be a challenge the first couple of times, but once you learn his techniques, he isn't too bad. At first he'll float around the room throwing energy orbs at you and occasionally summoning Zombies. Once you hurt him enough he'll drop his cloak and either summon Skeletons or turn into an energy ball and ricochet around the room. In either form the best time to hit him is when he's summoning, as he's stationary. The whip will probably do more damage, but the axe is easier to hit him with (note: Shooters should just use the magic dagger).

After the fight, Nathan becomes more resolved to find Morris as quickly as possible, though he wonders where Hugh went. After the dialog, go through the left door to get the Tackle

, which will let you break stone blocks by running at them and pressing

Go back and save your game if you wish, then head through the lower left door of the large chamber. Pass through the hallway, breaking the stone blocks, and you'll find yourself back at the entrance to the Abyss Stairway.

Head back around to the large room directly below the Outer Wall. From the top left doorway, jump up to the right ledge and keep going right. Go into the next room and break the stone block to find a Heat Shade and HP Plus

(9/43). Fight the Heat Shade until you get the Jupiter card

, which will let you heal via magic. The Heat Shade also drops the Stylish Suit

, though rarely. If you don't feel like fighting her right here, just continue on, as the Machine Tower is overrun with them. Either way, eventually head back to the large room that connects the Audience Room and the Catacomb, either by transporting or walking. Take the left door on the third level from the bottom to get to the upper portion of the Triumph Hallway.