Castlevania: Circle of the Moon/Machine Tower 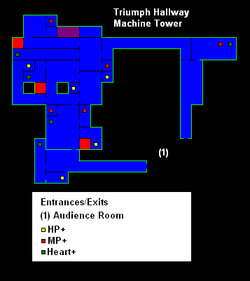 After defeating the Necromancer, Nathan heads to the western side of the castle, and begins the climb to the top of the Machine Tower, looking for a way into the Ceremonial Room.

An almost trivial section of the castle, there is only one room in the Hallway that is of any use to you right now (though you will return several times later in the game). From where you start, simply head left until you can go up. Jump up to the second level double back until you reach the opening in the ceiling, which takes you into the Machine Tower. The only enemies of note in the Triumph Hallway are the Zombie Thieves, which (very rarely) drop Luck Rings

. If you have the patience, kill the two on the upper level until you get one. 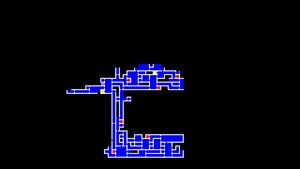 First things first; there is a save room nearby. To get to it, jump onto the first moving platform to get to the ledge above you, then go through the doorway to the right. Now, head to the left side of the large room, and begin working your way up to the top. To get by the Fox Archers (who drop Silk Robes

), jump straight up to get them to fire and then jump and whip to kill them before they can reload if they're above you. If they're on the same level as you, simply duck to avoid the arrows. At the top you'll find a Heart Plus

(9/36). Once you get it drop down a bit and break the stone block. Jump onto the vertically moving platform, then over to the ledge a little below you. Go through the door and at the bottom is a HP Plus

(10/43). Grab it and head back into the large room. Using the moving platforms, climb up to the upper most ledge on the left side. Break the wall to get a MP Plus

(11/36). Head back and go through the opening in the ceiling on the right to get into another large room.

There's a bunch of Heat Shades around here, so if you haven't gotten the Stylish Suit and Jupiter card yet, fight until they drop them, then begin climbing upward from the left side. The first door can be ignored for now, but the second door leads to a save room. You'll see a stone block that you can't break from this side, and continuing around (duck under the electric things if you get too close), you'll reach the top and the area will open up. Using the moving platforms, get to the upper left corner (you'll have to head right, then up, then back left). Break the wall to get a Heart Plus

(10/36). Now go to the right side of the large room (above the C-bend), and you'll see a gap that you can slide through. Do so and you'll end up in face to face with a Thunder Demon. It's very strong, so make sure you aren't under where the lightning is going to hit and jump and whip it to death. Break the wall in the upper right corner to get a HP Plus

(11/43), then go down and around, fighting a few more Thunder Demons. Don't try to outrun the Demons, as it will only result in more than one on the screen at once. As you head around, you'll see the exit that you have to slide through, but first head up and through the door. You'll be in a room with another HP Plus

and the Cockatrice card

. Once you get everything slide through the gap to end up back in the second large room, then go save your game if you want. Once you're set, climb back up to the top and go through the door in the upper right (above where you slide through before).

In this room, try and defeat the Heat Shades so you don't have fireballs appearing randomly from off screen. Break the stone block then go through the door above to get a MP Plus

(12/36). Keep climbing until you get to the third stone block (ignore the door for now). Break it and head left, through the door, and into a long hallway. Move by sliding to avoid the arrows from Fox Archers, and try to get as close to the Stone Armors as you can so you can whip them while kneeling. Don't stand up until you get to the Heart Plus

(11/36) at the end, and you'll be fine. Head back into the large room, drop down, and climb all the way up to the top. Go through the upper left door.

This room has a series of Slimes and Earth Armors. Try to kill the Slimes quickly so you don't accidentally get poisoned, and jump over the Armor's earth wave. The Earth Armors drop the powerful Gold Armor

, so you might want to spend some time fighting them. There's a save point at the far left, and the exit to the next area is in the ceiling.

The next room is fairly straight forward, as all you're doing is going up and over. Whip the Fox Archers from the ramps, while your head is below their line of fire. Break the right wall while jumping to get to a secret room containing three important items: a MP Plus

(13/36), a Thunder Demon that you should fight until you get the Manticore card

, and the first boomerang

of the game. Anyone except a Shooter should equip this and not let go of it for the rest of the game. Even though the boss is ridiculously easy, you should go back and save first to avoid having to re-collect the Card if you should happen to die. Once you're set, drop to the bottom of the room and head right, past the Heat Shades, and through the boss door.

To call the Iron Golem a joke would be an understatement — he is the easiest boss of the game. Shooters should stand as far back as possible and just fling magic daggers at him, while everyone else should use the boomerang. Stand exactly one boomerang length away, and you'll be able to deal four or more hits per shot, instead of just two. If he starts to swing, simply back up to avoid it and if he jumps, jump with him to avoid damage. Watch out for gears raining from the ceiling, though they are random and probably won't be a big threat.

Once you defeat the Iron Golem, Hugh will show up, get annoyed with your for "stealing his glory" and run off. Head to the right to get the Kick Boots

, and you can now jump off the side of a wall by pressing

when airborne. There's also a large heart dropping candle near the door, which you can use to replenish the hearts you used fighting the Iron Golem. If you equip the Venus/Manticore combination, you'll gain 10 hearts instead of 5 for each large heart you grab.

Save your game, then head back to the second large machinery room (the one with the C-bend and a save room). Drop to the very bottom and go through the left door. Work your way up to the top, using the Kick Boots to get a HP Plus

(13/43). Head back down, through the large room, and into the first large room of the Machine Tower. Go through the uppermost door on the right, wall-kick your way to the top, and grab the MP Plus

Now head up to the last machinery room (the one with four stone blocks) and go through the second door on the right wall. Get to the top and head right along the bridge, then drop down. Along the top you'll find Hyenas that drop the Night Suit

(lower defense than the Gold Armor, but you get a strength boost). As you work your way down, avoid the Gargoyles, and keep going down until you end up back in the Audience Room. There's a save point to the right. After that you have a few more things to collect, then you can head over to the eastern side of the castle.