Castlevania: Circle of the Moon/Ceremonial Room 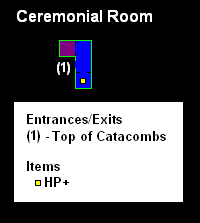 The final area of the game takes you right back to where you started. It is located in the center of the castle, at the top of the long shaft that you were thrown down at the very start of the game. On the right side of that room is a locked door that can only be opened with the Last Key from the Observation Tower.

It helps to have a good supply of restorative items, which you can get by killing certain enemies. Potions will probably not make a significant difference at this point, however a good supply of meats, potion his, and potion exes will keep you alive. VampireKillers, Shooters, and Thieves will want a number of mind restores as well, as it means less time spent waiting for your MP to recharge automatically. Magicians will probably have such a large amount of MP and high intelligence that they won't need to manually restore MP. It is imperative that Fighters have a couple of heart boosters, as they will have to rely on sub-weapons, instead of summons, to finish off Dracula.

Despite offering only half as much defense as the Shinning or Dark Armors, the Sage Robe (which you get from Lilith) is the best choice for non-Fighters. Dracula's second form is incredibly strong and can quickly trash even a high level Fighter who is wearing the Shinning Armor. As such, it's best to use the Sage Robe for the massive 500 point intelligence boost, which will raise your MP recovery rate by 5MP/second. Since this doesn't apply to the Fighter, who can't use magic at all, wear either the armor with the highest defense boost, or the Soldier Fatigues, which will boost your strength by 50 points.

The Double Grips are the best arm gear to wear as they boost all stats by 75, however other options include the Defense Armband (+100 def, -25 str), Hard Ring (+50 def, -10 str), Strength Armband (+100 str, -25 def), or Strength Ring (+50 str, -10 def). Don't worry about the effect that arm gear has on your intelligence as it will probably not affect your MP recovery rate by even 1MP/second. Luck is irrelevant as Dracula does not drop any items, however you should get a Luck Ring or two, or a Gambler Armband to wear when collecting the items for the final fight.

Once you enter the Ceremonial Room, jump into the little ditch and break the floor. Drop down into the secret room and grab the last HP Plus

(43/43). Climb back up and go and save if you want, otherwise continue up another level and you'll see the boss door. Go through and have a short conversation with Dracula. He'll mock Hugh's weak mind and Nathan for his concern for Morris. Nathan interrupts the gloating and the fight begins.

Dracula has pretty much his standard attacks that he's been using since the beginning of the series. He'll teleport around the room and throw bats at you. The bats can either come in a tall column that you can jump over, (fire element), a long line that you can duck under, (ice element), or a multi-directional wave that you have to move to avoid, (thunder element). Activate the Neptune+Thunderbird combo so the hard to avoid bat attack heals you. Then just launch crucifixes when sends the bats at you between teleports. Overall, this is a very easy fight regardless of what mode you're playing through.

After the fight Dracula flees to an alternate plane of existence. Hugh shows up and takes Morris out of the castle, while Nathan stays behind to finish the fight. You can, and should, leave to go save and replace any hearts that you used during the fight. Once you're prepared, step into the pillar of light in the room.

Now he's a large purple and red demon that is much stronger than before. At first he'll unleash one of three attacks: poison bubbles, a meteorite strike, or a laser sweep. His only weakpoint is the eye in his chest, and that can only be hit when it opens. If he's going to use the laser, get up and back to avoid it, but for the other attacks, play defensively until he's done attacking. VampireKillers, Fighters, and Shooters should then jump and fling boomerangs at the eye while Magicians and Thieves should summon Thunderbird.

Halfway through the fight he'll start charging at you. This is a very powerful attack that can take hundreds of HP away from even a high level character. Use the Roc Wing to stay airborne until he finishes charging. After a few charges, he'll transform into a swarm of bats with the eye at the center and float around. Fighters should jump and hit the eye with the boomerang, while everyone else should summon Thunderbird. Magicians can just wait for their magic to recharge while Thieves should have a massive stockpile of mind restores to burn. VampireKillers and Shooters should also use restores, but more conservatively than Thieves.

It's a long fight, but once you learn the pattern it is fairly straightforward.

Once Dracula dies, the game is over and you can sit back and watch the last cut-scene, which involves Nathan meeting up with Hugh and Morris, a short dialog, and watching the castle crumble. If this is your first time playing through as a VampireKiller, Magician, Fighter, or Shooter, you'll get a password to use to play the next mode (don't bother memorizing it, as it gets listed on the game menu).

Sequentially, the non-canon Legacy of Darkness follows Circle of the Moon, however Bloodlines is the next canon game. That said, neither game ties directly into the story of this one. Harmony of Dissonance was the next Castlevania game to be released, and takes place almost 100 years prior to Circle.