Castlevania: Circle of the Moon/Catacomb 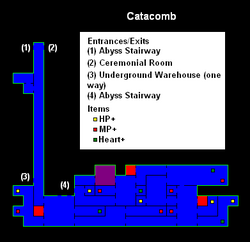 The game starts out in front of the Ceremonial Room, during Dracula's resurrection by Camilla. Morris, Hugh, and Nathan attempt to stop him, but are too late. Dracula knocks the floor out from underneath Nathan and Hugh, throwing them into the Catacomb, and captures Morris for use in a restoration ritual.

After a loooooong drop, Hugh tells Nathan to stay out of his way and runs off to rescue Morris on his own.

As soon as you gain control over Nathan, drop down the pit to your right and continue down the shaft. There are Skeleton Bombers on most of the ledges and, while one of the weakest enemies in the game, their bombs can do a surprising amount of damage. Avoid or whip the bombs, then kill the Bombers. You might get the Salamander card

, which is of no use just yet. Right in front of the doorway is a candle that drops a large heart. Grab it, go into the next room, then come back and grab it again. Repeat until you have all of your hearts.

The next room is a large square with three levels, a bunch of exits, and a slew of monsters. Ignore all of that for now, and go down to the second level. On the left side of the room, still on the middle level, is an opening that will take you to the first save room. Save your game and then head back into the square room. Fight the monsters until you get the Mercury card

from the Bats, and the Salamander card from the Skeleton Bombers if you didn't already get one. If you go into the DSS menu, you can equip the two cards that, when activated, give you a flame whip. You should also hang around this room until you get up to level three or so, and hopefully you'll get a couple of potions

along the way. Additionally, pick up the dagger

from a candle on the lowest level (if you're playing as a Shooter, immediately leave the room and come back to the same candle to upgrade your dagger to a magic dagger).

Once you have everything that you need from this room, head through the lower right exit, into a long corridor. You'll run into an Earth Demon almost immediately. It is strong, but drops two important things: Magic Gauntlets

and the Serpent card

. It may take a while to get the Serpent Card, but it is worth the time, as not only does the card let you freeze enemies, but you'll gain a fair amount of experience getting it. In any case, the first time you're in the room head to the far right and get the Dash Boots

, which enable you to run by double-tapping

. Once you have what you need, take a running leap to reach the platforms and navigate to the lower right exit.

This room is filed with Zombies, Skeletons (the classic bone throwing kind), and Poison Worms. Keep fighting the Skeletons until you get the Leather Armor

, as it will give you a substantial boost to your defense. Go through the exit on the right.

You'll be in another large room with eight different exits. You can get the Cotton Robe

from the Skeleton Spears, which will increase your MP recovery rate, though it is a very rare drop. Work your way up to the top, and go through the exit in the upper left corner (not the one on the ceiling), where you'll get your first MP Plus

(1/36). Back in the large room, halfway between the lowest and middle exits on the left side is a breakable wall. Whip it to break it, then go in and get another MP Plus

(2/36). Go through the lower right exit of the large room and get a Heart Plus

(1/36) (you can also fight another Earth Demon and get the Serpent card if you didn't get one from the first demon). Don't bother trying to get up the shaft at the top of the room, as you'll have to come back much later in the game. Go back to the large room and through the middle exit on the right. At the other end of this room is your first HP Plus

(1/43). The topmost exit on the right side of the large room is another save room. Save your game if you want then go through the exit on the ceiling of the big room.

Avoid getting hit by the Bombers while you jump into the room as they have an annoying habit of knocking you back to the previous screen. Just slide under the bombs and into the skeletons. Head right and grab the MP Plus

(3/36), then head all the way over to the left side and slide through the opening into another large room. In the lower left corner is a room with a HP Plus

, which all non-Shooters should pick up (Shooters should avoid picking up any other sub-weapons until near the end of the game). Go through the lower right exit to get dumped back into the large room with the Skeleton Spears and Bone Heads. Go back through the ceiling exit, and this time head up and left to the upper left exit.

This long hallway features a trench filled with Mudmen, who are useless in terms of experience and items, so just continue to the left. The upper exit will take you to the third and last save room of the Catacomb, and the lower one will take you to yet another large room. This one has Gremlins flying about throwing spears at you. They're easy, but if you stay in one place too long, they'll be able to hit you. Get a Heart Plus

(2/36) from the exit on the right and head around the bend at the bottom. Ignore the lower left exit for now, and grab a MP Plus

(4/36) from the middle room. This room has a couple of Hoppers, who you should fight until you get a Gauntlet

or two. Head back to the save room, equip your best armor and save. Now head back to the room you were just in and go through the glowing blue door in the upper left corner.

Cerberus can be fairly difficult, depending on your levels, equipment, and what mode you're playing. He can fire a powerful beam, throw lightning orbs, and lunge at you. Your best chance of attack is to wait until he goes to one of the lower platforms, then stand under him and throw axes or jump and whip. He isn't extremely hard, however he can kill you pretty quickly if you get hit by the lunges or fire beam too often.

After you kill Cerberus, refill your hearts from the candles in the room, then go through the left door and grab the Double

, which will allow you to jump a second time while in midair. Head back to the large room and either go back and save if you want, or head straight through the lower left door that you ignored earlier. Fight off the mummies and double jump to the ledge on the left side. Break the wall on the right to get another HP Plus

(3/43). Head out the left exit and you'll be in the Abyss Stairway, however you're not quite done with the Catacomb, so drop down, back into the square room where you started the game.

). Double jump onto the ledge and head up and left to get the last HP Plus

(4/43) for now, then to the right where you'll see a bunch of Brain Floats. Use the Mercury/Serpent combination to freeze them so you can use them as platforms in order to get the MP Plus

(3/36), is in the long, horizontal room in the northeast of the Catacomb. On the right side, above where you got an MP Plus, you can double jump onto a ledge, which leads to the Heart Plus.

Go back and save at the first save room of the Catacomb, then head through the left opening in the ceiling of the square room to reach the Abyss Stairway and continue your journey.