Castlevania: Circle of the Moon/Chapel Tower 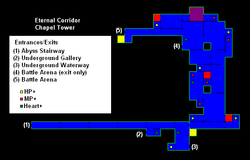 Having gotten the Kick Boots out of the Machine Tower, and finally found Hugh, Nathan can cross through the Eternal Corridor and into the Chapel Tower.

Before you set foot in the Eternal Corridor, you need to pick up a few things from the Audience Room that you couldn't get the first time through. Head to the outdoor area of the Audience Room (right after the Outer Wall). Once here, climb up the rafters, and you'll see a narrow gap along the left side. Wall-kick your way to the top, and you'll find a Heart Plus

(12/36). Drop down to the ground and head right. Double jump on to the ledge, then wall-kick your way up to the top and go through the door.

Slide-kick your way down the hall, killing the Skeleton Athletes as you go, and at the end you'll find a HP Plus

from one of the Athletes. If not, simply repeat the process until you get the card. Once you do, go to the Abyss Stairway.

You can do this by heading back to the room right below the Outer Wall and using the warp room. After you warp, head up the right side of the room and take the top door. Head across this room and drop through the opening to get to the Stairway.

Work your way down until you can either go right or down, then go right. Above the door is another narrow shaft that you can wall-kick your way up. Go through the door at the top and you'll be in the Eternal Corridor.

Despite the name, the corridor only consists of five rooms.

You'll be in a large room, with the exit on the right side, at your level. Before you leave though, descend downwards. The first door on your right is a warp room, go in to connect it to the other two warps. You can warp back to the Audience Room to save if you need. Continue down to the bottom and go left, ignoring the door on the right. Jump and whip the left wall to get a HP Plus

Flame Armors and Skeleton Knight are all that stands between you and your save room. Fight through them (make sure you move back when the Flame Armor goes to swing), or simply double jump over everything. Head up the opening in the ceiling and go directly right to the save room. At this point you should go back into the Eternal Corridor to get any equipment from enemies that you need. Once you're set, fight the first Bloody Sword in the Chapel Tower until you get the Mars card

Once you have everything, you're ready to begin climbing the Chapel. The Bloody Swords are annoying, to say the least. The best time to hit them is right after they make a dive. Try to stay in open areas so they can't hide in the walls. Jumping over the Flame Armors can be dangerous as the ceiling are too low for you to clear the Armors' sword when they are swinging. It's best to just fight everything. If your intelligence is over 400, equip the Venus/Serpent combination to boost your defense by 25%.

From the save room, work your way up until you reach the third set of stairs on the left. Be careful not to fall when you're on the right side of the room or you might have to do the entire climb over again. Break the wall to get a MP Plus

Head back and continue climbing (be aware that all of the Bloody Swords will have returned) and go through the door in the upper left corner. Wall-kick your way up the right side, jumping only when the Beast Demons aren't firing, to get a MP Plus

(16/36). Drop back down and go left, freeze the Brain Floats as usual, then wall-kick your way up to the Heart Plus

(15/36). These jumps can be tricky, but are possible. See the diagram for exact points to jump from (red Xs are points to wall-kick from, blue -s are points to double jump). Exit this room and go through the ceiling to the next section of the Chapel.

(17/36). Jump back down, and continue climbing from the right. You'll see a door to a save room when you get to the next level. After saving, climb up the long staircase and jump through the opening to get to the first room full of bells.

A Thunder Demon will soon swoop by; either kill it or just go left into the next room. Here, fight your way past the numerous Were-panthers and other enemies, climb up the left side, then double back and go through the door on the right. You'll be in the top half of room you were just in. Kill the Thunder Demons then double jump across the gap and go through the door on the right. This is a good place to heal yourself with Jupiter/Mandragora if necessary. Once you're healed, wall kick your way up, freeze the Brain Floats, and grab the MP Plus

(18/36) at the top. Head back down, jump over the gap again, then go up through the ceiling, back into the Chapel.

This massive room is fairly straight forward, though you have a new enemy to worry about: the Marionettes. If they touch you, you'll be cursed and unable to attack for a while. If you do get cursed, slide-kick them to death and then wait for the curse to wear off. You can get Cure Curse

from them, though you should save them unless absolutely necessary. Head on up the room, until you get to a shaft on the right side. About halfway up is a breakable wall that will lead you to a HP Plus

(16/43). Continue climbing the shaft, then work your way over, down, and around to the next shaft. Be careful here, as falling means going all the way back down, and there are Bone Towers nearby, shooting at you. Once you get to the top, head back down along the left side and into the next room.

Drop down and head all the way to the left, watching out for Marionettes, and climb up to get a Heart Plus

. After you get it, head to the left side of the room and break the wall to get a HP Plus

(17/43). Head up and left to the save room. Once saved, head right along the top to get to the room outside of Adramelech's chamber.

As you go through the blue door, Hugh will be thrown out. He, again, gets annoyed at you for being around and tries to fight Adramelech before Nathan can. However, as he's hurt, he can't do anything, so you have to do it.

Despite being completely stationary, Adramelech can be one of the hardest bosses in the game, depending on your levels and mode. His head is his weakpoint, and you'll have to jump to be able to hit it. For most modes, you'll want to stand just before the left column so you can jump and fling boomerangs at him as quickly as possible. Equip Jupiter/Golem to increase your invincibility time, and simply take away all of his HP before he takes away all of your HP.

Once defeated, head into the room on the right and hit the switch. This will destroy all of the large statues that block your way into the Underground Gallery and Underground Waterway. Head through the door on the right to get a MP Plus

(19/36), then start your trip back down to the bottom of the Tower. When you get back outside of Adramelech's room, Hugh will insult you, telling you that the only reason you've gotten as far as you did is because of the whip, and then run off again.

Head back and save, then go back down the same way you can up. It's faster because of gravity. You will notice a new enemy along your way: the Thunder Armor. These things are very strong and their attacks are incredibly annoying. Just avoid them rather than risk getting killed. Save at the base of the Chapel. In the Chapel entry, the Flame Armors have been replaced with Thunder Armors. If you want, you can kill them to get the Steel Armor, however you will be encountering other enemies that drop it more frequently very soon. Since the save point is not far away, you can grind EXP from these Thunder Armors, which give 800 points each.