Castlevania: Circle of the Moon/Underground Warehouse 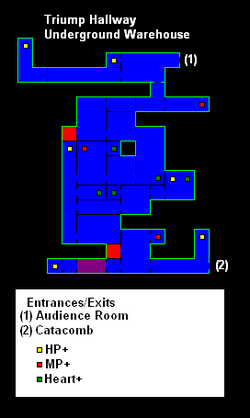 With the Heavy Ring, Nathan is able to explore much more of the castle, including the Underground Warehouse.

From the warp room of the Audience Room, go into the large room, up one level, and through the left door to the lower section of the Triumph Hallway. Smash your way through the weak enemies, and jump onto the left ledge when the path starts to go downward. Break the wall to get a HP Plus

(23/43). Head down and back to the right, push the crate out of your way, and drop into the Underground Warehouse.

There's a single Hippogriff flying about that can be killed or ignored as you head through the door on the right. Keep fighting the Arch Demon until it drops the Apollo card

. At the end of the hall is a MP Plus

(23/36). Go back to the entrance, push the crate from under the ledge so you can use it as a platform, then jump up to the left door.

You'll be in the first of several rooms in which you have to rearrange the crates to get to the exit. Before dealing with the puzzle, get rid of the King Moths so you don't accidentally get poisoned while jumping about. To get to the exit:

You'll be in a very tall room, and you'll see a crate wedged into a small gap that you can't get to just yet. Work your way down, killing the Bone Towers as you go, and when you get to a ledge that is smaller than the previous ones, head right. Work your way up to the top right of the room, killing the Thunder Armors as you go. At the top you'll see the crate again. Push it to the left, then continue pushing it all the way to the ground. Move it into a spot where you can jump up and get the Heart Plus

(21/36). Go through the door at the bottom into another puzzle room.

First get rid of the Fox Hunters so you can move around easily.

You'll be in another large room with a new enemy: the Holy Armor. These guys are pretty strong, but easy enough to kill if you stay just under one whip's length away and kneel. They drop the Platinum Armor

, but if you got the Needle Armor before coming here then it is of no use to you. Head up the right side of this room, ignoring the crates for now, and break the wall on the upper rightmost ledge to get a Heart Plus

(22/36). Work your way back down, pushing the crates halfway out from the gaps they're in (don't push them out so far that they fall down). Head up the left side of the room, using the crates as platforms, to get to a MP Plus

You'll be in a long shaft with a couple of Succubi flying about. Drop down to the ledge directly below the door and break the wall to get a Heart Plus

(23/36). Continue down the shaft, ignoring the next door and going through the one all the way at the bottom.

This is the last puzzle room, and you can start by getting rid of the Bone Towers.

Be aware that from now on, there will be a couple of Succubi in the room. You will not, however, have to do any of these crate puzzles again. The room you're in right now is right before the boss, and filled with Forest Armors. Jump to the ledge on the right and break the wall to get a MP Plus

(25/36). Work your way down the room, stopping at the save room off the middle-left side, and go through the door on the left to fight Death.

His attacks are both strong and annoying; a great combination for any boss. Use the Jupiter/Serpent ice shield to block out the flying sickles and then jump around and either whip him or use the boomerang. Once he's taken enough damage, he'll transform into a skeletal tank thing, and you can just finish him off with the boomerang.

(24/43). Go back and save, then in the room with the Forest Armors, go through the door on the right. Get past the Dryads and Golems, and before you slide through the gap, get up to the top and grab the HP Plus

(25/43). Drop down and slide through the gap and you'll find yourself back in the Catacomb. From here you could go directly to the Underground Waterway, but there are a few items to get first.

Head down the shaft and into the large, square room. The first thing you'll notice is that all of the enemies have been replaced by Grizzlies and Arachnes. The Grizzlies are very powerful and the Archanes, while weaker, can slow you down. Go through the middle right door, move the crate, and grab the Heart Plus

(26/36). Head back to the square room, and go up, into the Abyss Stairway. Climb up to the top, and make your way to the Machine Tower. In the second room (the one with the C-bend), go through the broken wall in the upper left and you'll find Lilim. Lilim is rather strong, so use the Uranus/Thunderbird summon rather than trying to whip her to death. Eventually, she'll drop the Dark Armor

, the second best armor in the game.

Climb back down the tower and use the warp room in the Audience Room to get to the Eternal Corridor. Go to the third room (the middle one) and you'll find Witches and Frankens. The Frankens have 1200HP and are very strong, but give a lot of experience and drop the Soldier Fatigues

(about as fourth as strong as the Dark Armor, but they boost strength by 50 points). The Witches are much easier to kill and drop Magic Robes

(half the power of the Dark Armor, but boost intelligence by 300 points). The Witches also respawn instantly, so you don't have to leave the room for them to come back.

Once you have all of the items and power-ups, head back down to the bottom of the Abyss Stairway, save your game, and go through the door below to get into the Underground Waterway.