Castlevania: Circle of the Moon/Walkthrough 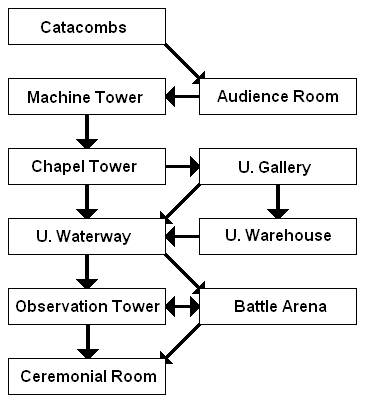 Paths through the castle

While Circle of the Moon does not have explicitly defined chapters, there is a logical division marked by boss fights. There is an order in which you go through the castle, however some areas are optional. You will always be able to (and in several instances, have to) return to previous sections of the castle in order to get power-ups that were originally inaccessible and to reach new areas of the castle. In most cases, once you defeat the local boss, you'll receive a relic that will give you a new ability, which makes exploring the next area possible (or at least easier).

The Underground Gallery, Underground Warehouse, and Battle Arena are optional areas. The Gallery and Warehouse each contain several power-ups, as well as relics that will make future areas easier, allow you to get quite a few power-ups from old areas, let let you fight the three secret winged demons — all of whom give you a lot of experience and powerful tools. Note that you must finish the Underground Gallery in order to access either of the other two optional areas.

On that note, you can begin your journey. At the bottom of a pit, no less...

It will be assumed that you are completing all sections of the game in the order specified. Should you choose not to complete a section, it will result in you being unable to retrieve certain things or enter certain areas. Simply skip over these sections. It is highly recommended that you do not sequence break your first time playing, as doing so makes the game substantially harder.

This is actually a player-defined gameplay rather than a built-in mode. The purpose is to beat the game as fast as possible. It requires Magician mode, or, if you use DSS glitch, any mode available to DSS. Generally, you will need to do the following:

If you do everything well, the game can be beaten in less than one hour.