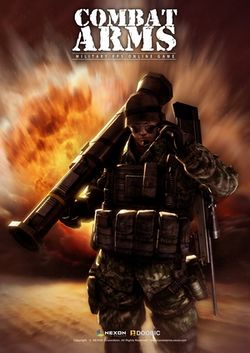 Combat Arms is an online computer game developed by Doobic Studios and published by Nexon Korea, Nexon America and Nexon Europe. Combat Arms registered over 2 million players in its first year of service. It is client-based, which means that you must download the software in order to play the game. Combat Arms is completely free to register and play.

Gameplay is fairly simple. Join a game room in which the objective is mostly to kill other players, unless the game mode consists of a mission. After a set goal is reached, all participants in the game are rewarded with EXP (which is accumulated to rank up) and GP (which is the in-game currency that can be used to buy other guns and equipment).