Cold Seed is the second smallest map in Combat Arms. It consists of a snowy outdoor area, several buildings, and a system of upper hallways.

Below is a map of Cold Seed with the spawn points for Alpha and Bravo teams labeled in red and blue. Special locations and features in the map are noted. These features are numbered in green and detailed below. The semi-transparent purple line shows the split of "area possession" by Alpha and Bravo teams. Bravo team has control over areas below the purple, Alpha team has control over areas above it. Notice that Bravo's territory is larger than Alpha's, as is in many maps, but this makes it easier for Alpha team to invade and rush enemy bases. 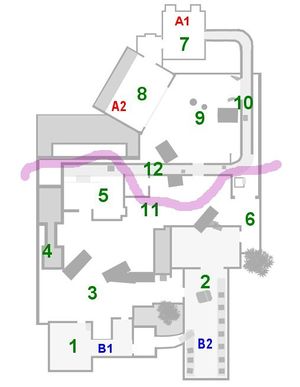 This is Alpha's main spawn point. This spawn location has two side exits to the left and the right.

Taking the left will lead you into the garage (A2) and from there out into the Alpha field. This exit is usually the most used in smaller games, as you have less threat of ambush. This is also a primary spot for Snipers on Alpha, in bigger matches, because of the cover provided by the tank.

However, taking the right path will lead you up the inclined ramp into neutral territory. Taking this path is more dangerous, as Alpha has a height disadvantage, and Bravo can hide either at the top of the path, or crouch behind the metal (non-breakable) crate halfway along the path. This is very cramped, and has almost no cover in it. It is not recommended in large (5v5 or larger) matches.

The garage base is largely under alpha's control, and is rarely invaded by Bravo. When it is invaded, by a person experienced in camping, it often leads to quite a few kills before the alpha team gets rid of the parasite. If you are on Alpha and the garage is invaded, an m69 frag or a gas grenade and then a regular frag will usually clear out the intruder. If you are on bravo, hide in one of the corners, and kill them once they come out. Bravo can usually camp the place even better with a two person strategy, though -- One in the back, on the steps or behind the railing to occupy Alpha, and number two in the corner to shoot or stab people in the back while they attack Bravo number one.

The Alpha Field is filled with "defenders" and AFK'ers alike. However, if Bravo is brave, they will rush here. The only strategy that works is grenades. Mainly, if your sure that your team won't walk into it, toss an incendiary grenade – or tell a friendly to. This is highly effective because it blocks Bravo inside their side.

Don't rush. If Bravo is there, don't be a hero – pick them off one by one. Make sure you're not grenading carelessly. This could lead to team killing.

This hall is a prime defending and camping spot for both Alpha and Bravo alike. If members of Bravo take the top of the hall and plants mines at the ladder, they could camp there for some time. If you are on Alpha, it should be noted that you scope up at the top of the hall in case for a camper. This also results in being quickscoped by a camper occasionally.

You can get on the roof inside or on the pipes. By doing this you jump on the railing and then jump down to get on the roof , or take out you knife and jump on to the light above you. Next you jump from the light onto the pipes up top. This is a good camping sopt but the roof is to commenly looked at.

Not a very used area because of Campers along the Horizontal hallway.

This is a highly contested area, for two reasons:

Alpha team has a disadvantage here because their end has a ladder from the ground, which makes it easier for Bravo to gain control of the Hallway. However, Bravo's entrance has many camping spots that make it much easier for Alpha to control the hallway once they have it. So everything stays balanced.

Tips on controlling the hallway: When you have control, lay mines behind the crates in the hallway, in the positions where the enemy would crouch and snipe but your team rarely would. Snipers are effective, as are grenades in clearing out the hallway quickly, but an automatic weapon or two is recommended to protect people entering from behind, at least with Bravo side.