If you need help with wiki markup, see the wiki markup page. If you want to try out wiki markup without damaging a page, why not use the sandbox?
Cleanup required: Change weapons section to reflect new organization from the ToC

If you need help with wiki markup, see the wiki markup page. If you want to try out wiki markup without damaging a page, why not use the sandbox?
Cleanup required: Change weapons section to reflect new organization from the ToC

In Combat Arms, renting items will cost you GP (Gear Points), which you can get simply by joining and playing games. The items can be rented for either 1 day, 7 days, 30 days, or 90 days, with the rental price increasing the longer you rent for. However, the unit per-day price will be significantly lower if you buy things for a longer time. For example, renting an AK47 for just one day will cost you 800 GP, but renting it for seven days will only cost around 3500 GP, which is much less than if you had 1-day rented the AK47 every day for seven days. You can customize your character is by renting weapons and/or bodywear.

Everybody has four weapon slots, accessed in-game by pressing 1, 2, 3, and 4. Each of these weapon slots can only carry a certain type of weapon. 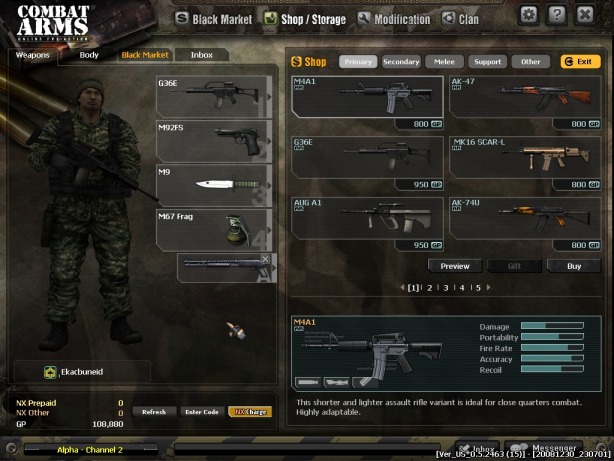 Your primary weapon is a powerful gun that you will very likely be using the most out of your four weapon slots. Types of primary weapons include assault rifles, submachine guns, machine guns, shotguns and sniper rifles. Assault Rifles are guns with a good balance of attributes. Submachine Guns sacrifice damage for rate of fire, machine guns sacrifice accuracy and portability for damage and huge ammo clips. Sniper rifles are powerful guns that are deadly from a range but very clumsy and useless at close range. Shotguns are best at close range, and have great damage, but have great recoil and force you to reload after every shot.

The default primary weapon for everybody is the M16 Assault Rifle. It costs 0 GP to maintain and stays permanently in your storage. However, it is not a great gun compared to the other Primary Weapons that you can rent for GP.

For more details on this topic, see Combat Arms/Pistols.

The secondary weapon is a pistol, which is a weaker gun that you can use in the case that you run out of ammo for your primary weapon, or find yourself in a tight spot. Pistols are small guns that are only slightly weaker than assault rifles but are not capable of automatic fire. The one exception to the weakness is the Anaconda Black Revolver, which is in every aspect except for name and looks is a non-spread shotgun.

The default Secondary Weapon is the M92FS Pistol. Like the M16 Rifle, it costs nothing to maintain, but isn't very great either.

For more details on this topic, see Combat Arms/Melee.

The melee weapon is something that you can use to kill enemies at a range such that you are pretty much right next to them. All melee weapons have two attacks, done with the left and right mouse buttons. Melee weapons have infinite "ammo". Since you have to get close to an enemy to use the melee weapon, it is not used much. People will often use the knife to kill and humiliate people who are not watching their back (often snipers looking through their scope).

The default Melee Weapon is the M9 Knife. It isn't great, but since melee weapons are used very rarely anyways, most people do not bother to rent a better melee weapon with GP, except in the case of melee games.

For more details on this topic, see Combat Arms/Support.

The support weapon is anything else that might help you in combat. Support weapons include a variety of explosives, including grenades and mines. Other things like Heartbeat Sensors are also available for the Support Weapon slot.

The default Support Weapon is the M67 Fragmentation Grenade. It is actually decently useful for killing enemies, and people that rent other support weapons usually place it in their Backpack (explained below) rather than replacing their M67 grenade with it.

For more details on this topic, see Combat Arms/Modifications.

By clicking on the Modifications tab from the lobby or game room, you can add some components to your guns to make them better. Modifications are rented for 1, 7, 30, or 90 days, just like everything else, but they are considerably less expensive. To add a Modification to a gun, simply select the gun you wish to modify from the menu on the left and then click "Attach". Not all Modifications can be put on all guns, as they are type-specific. For example, you can place the same scope on both an AK47 and an SCAR-L, because they are both Assault Rifles, but you can't put the same scope on a pistol. Some weapons like the G36E and K7 come with built-in modifications. 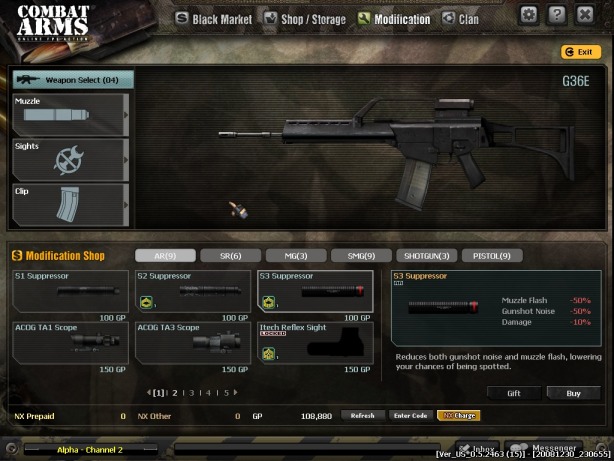 Suppressors go in the front of your gun and will decrease the volume of your gun shots, making you less likely to be spotted. The cost of this is reduced damage for your gun, but it most of the time barely noticeable. There are three different suppressors, all of which do a different additional third thing. The S1 Suppressor will translate "up" recoil into "diagonal' recoil, the S2 Suppressor reduces tracer, and the S3 Suppressor eliminates muzzle flash.

Machine Guns and Shotguns can not be suppressed. The K7, SR25, USP Tactical, and L96A1 Ghillie have built-in suppressors which can not be replaced. All other guns can be fitted with one.

Scopes go on top of the gun and will give you better aiming, accuracy, and/or magnification when used. To use any scope in-game, click the right mouse button. While using a scope, your crosshair is replaced with a dot or stationary cross that will not open up and become big like your crosshair will. Looking through a scope also reduces recoil.

Different magazines can replace the default one that the gun has. Some magazine modifications will increase the maximum number of bullets that can be in one clip, at the cost of increased reload time. Other magazines will do the opposite: reduce the clip size but decrease reload time. Note that magazine mods do not change the total number of bullets, it only changes the clip size. For example, a normal AK47 will have an ammo count (see attributes of a weapon) of 30/90, while adding the Extended Magazine I will change it to 40/80. In each case, you still get 120 shots total.

Nearly every single gun that exists can be fitted with magazine modifications, including Machine Guns and Shotguns. The exceptions are: Double Barrel, Anaconda Black, Dragonuv, and the P90.

For more details on this topic, see Combat Arms/Bodywear.

Besides weapons, there is a variety of bodywear you can rent with GP in the exact same way. Some have helpful effects, and they are usually more expensive than those that are just for looks. There are five bodywear slots.

Headgear includes a variety of protective helmets and speed-boosting beanies and berets. The default headgear that is free to maintain is the Black Cap. It has no effect. It should be noted that protective helmets do not protect against headshots (getting headshotted with one on is still instant death), they simply reduce the total amount of damage done to anywhere on your body, like your chest. There are GP-based headgear, as well as Black Market but most of the time everyone chooses to not purchase headgear. Instead of getting a rented piece of equipment, they choose to obtain one through Fireteam.

There is a great array of things to buy that you for the Face slot. There are two items: the Aviator Shades and the Sports Shades, that have no effect and are purely for looks. Things for the Face Slot that do have helpful effects include Gas Masks, Fire Masks, and also the well-valued Hammer Face Guard, is one of the few face protection items. There is no default item for the face slot.

The Uniform slot is where your camo goes! There is a variety of different camos which will help you blend in with the maps, such as Arctic Camo, Urban Camo, Desert Camo, and Woodland Camo (rank restricted). Besides looks, items rented for the Uniform slot have no effect. The default camo is the standard greenish-brownish army color uniform. Even more camo colors are available through the Black Market.

Your vest is the bulky black thing worn over your uniform. There are currently only three vests available for rent: the Light Vest, the Heavy Vest and the Balanced Vest. The Light Vest will increase your speed dramatically, but also increase your damage taken. The Heavy Vest does the exact opposite. The Balanced Vest is between the Light and Heavy Vest. The default vest is the Medium Vest, upon which the "normal" speed and damage defense are measured. Also, Nexon has released a new vest called the Tactical Vest, which slightly raises both speed and armor.

The backpack is a very important piece of bodywear. It will give you extra weapon slots which can accommodate any of the four types of weapons. For example, if your primary weapon is an AK47 but you also feel that you want a sniper rifle, you can buy an L96A1 and backpack it. People that want extra support weapons, maybe such as a flash grenade, will often backpack it instead of replacing their default grenade with it.

Everybody has a default backpack that gives you one extra weapon slot. Renting the Advanced Backpack will give you two extra weapon slots, but it comes with a slight movement penalty. In recent times there has been a new backpack, a Utility Backpack. Same slight movement penalty as the Advanced Backpack, but it offers three weapon slots. It has a high rank requirement and a large GP cost, though.