There are tons of different weapons in Combat Arms that you can rent and modify and use, but what tells them apart besides their appearance is their performance. Each weapon in the assault rifles, submachine guns, machine guns, sniper rifles), pistols, shotguns, melee and support sections can be assessed for these aspects:

It's best that you know what each of those means so that you can choose a gun you like and not waste GP.

Quite straightforward, damage is the capability of one bullet to bring down an enemy's HP. The damage statistic will be measured by exactly how much HP the victim loses, assuming that he/she is shot to the upper chest, shot from point-blank range (because a few weapons become weaker with distance), and wearing all the default gear. A gun with a damage rating of 100 or above is a one hit kill, 50 or above a two hit kill, 34 or above a three hit kill, 25 or above a four hit kill, and 20 and above a five hit kill. No gun as of now is weaker than a five hit kill.

The difference in the damage rating of guns that have both the same "number of shots to kill" can become important sometimes. For example, if a person is shot once with a weak gun but manages to run away, it would be easier to finish them off with a G36E than an M4A1, because even though they are both 4 shot kills, the G36E still does more HP per shot.

The damage statistics are taken from the official Combat Arms website and modified if testing proves the value to be different.

The firing rate of a gun is easy to understand; it's how fast the weapon chugs bullets. A faster firing rate means a faster kill relative to the amount of damage per shot.

The official Combat Arms website rates the firing rate of guns out of 100, but the physical meaning of this value is unknown. Therefore it may be supplemented by an RPM value in parentheses (obtained by in-game testing).

The firing rate of a weapon can be measured in RPM (rounds per minute) by timing how many seconds it takes to empty a clip, dividing the clip size by that, then multiplying by 60. For example, if it takes 6 seconds to unload a clip of 30, then the firing rate is (30/6)*60 = 300 RPM.

Accuracy will be measured on a scale of 0 to 100 (using the data from the official Combat Arms website), with 100 meaning that the gun has perfect accuracy and the bullet will always land in the exact center of your screen (missing will always be the player's fault).

The portability statistic will be estimated on a scale of 1 to 100 (using values from the Combat Arms website). 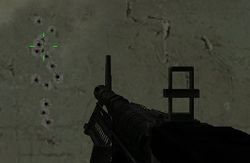 Recoil is how much your aim is thrown off while firing a gun. Recoil is a complicated stat because guns not only have a recoil strength, but a unique recoil pattern. Upwards recoil can be handled simply by pulling down on the mouse. Sideways recoil sometimes starts after holding the trigger for some time and is difficult to counter. The most annoying recoil patterns can throw your aim off diagonally.

Since recoil is hard to assess, the values from the official Combat Arms website will be used, and supplemented with pictures of the recoil pattern (screenshot of bulletholes in a wall after spraying a whole clip). Some guns have very low recoil, but true no-recoil can only be attained via hacking.

The ammo statistic has two numbers separated by a slash and tells two things: the clip size, and the backup bullet count. The clip size denotes the maximum number of shots you can fire before you have to reload. When the gun is reloaded, the clip becomes full again, and the amount of bullets put in is subtracted from the backup bullet count. When the first number is 0, you need to reload. When the second number is 0, you don't have anything more to reload. If both numbers are 0, your gun is completely out of ammo.

For example, a standard Assault Rifle starts out with an ammo stat of 30/90. After shooting the entire clip out, it becomes 0/90, and after the reload, it is 30/60. Using a Magazine Mod will change the first number so your clip is bigger or smaller, but it also changes the second number so that you maintain the same number of bullets no matter what. Adding Extended Magazine I to an Assault Rifle will change the ammo stat from 30/90 to 40/80.

There are three possible firing modes for a gun: Automatic, Burst, and Semi-Automatic. An automatic gun will spew bullets as long as you hold down

, and it will continue to do so until you have to reload. A burst gun will fire three bullets in rapid succession with each click. A semi-automatic gun requires a separate click of the mouse for each shot.

Some guns have multiple firing modes that you can choose between by pressing F. The firing mode you are on is shown by the lower-right hand corner. If there are five bullets, it is on automatic. If there are three, burst, and if one, semi-automatic.

Using burst mode will decrease the crosshair size, making it easier to aim from the hip when moving. To decrease the crosshair size, furthermore, consider walking or crouching. Doing this, and combining it with burst fire will make an extremely accurate hipfire gun, even if moving. But, be aware that crouching or walking will reduce your movement speed, making you an easier target for enemies.

Semi-Automatic does not reduce hipfire spread, but instead allows for much easier long range shots, since you control the fire rate of you gun. Most guns with the semi-auto option have higher damage and/or recoil, so it can be beneficial.

Bolt action is considered almost the same as semi-automatic, except that it requires a longer period in between shots, since you must rechamber the round after each shot. In some cases, hitting the weapon-switch button (Q) twice, can shorten the bolt action time.

Most guns require you to attain a certain rank before you can buy them from the shop. Usually, guns with higher rank restriction have higher performance, but this is not always the case. Gun variants such as Camo or SE versions tend to have a very high rank restriction, despite the difference from the standard version being little more than aesthetic.

The price is how expensive the weapon will cost you to rent from the shop for a one-day period. The most expensive weapon is not always the best weapon.

Most Assault Rifles cost 800 GP, besides the G36E and AUG-A1, which cost 950 GP. The extra 150 GP is actually to compensate for their built-in scope, not because they are better. Also, many people are comfortable with the SR25 Sniper Rifle, which only costs 1100 GP (or 1000 if you take the built-in silencer into account), while the L96A1 Sniper Rifle costs 1400 GP, proving that the L96A1 is not necessarily the "best".

Standard guns can be fitted with a scope, silencer, or extended magazine. In certain cases, a modification is not available (you cannot add a scope to a machine gun). For other guns, a modification may be built-in. For example, the G36E assault rifle has a built-in scope, and the K7 submachine gun has an adapted silencer. All sniper rifles have a built-in scope with high zoom.

Overall, guns modifications are determined for each gun as "available", "not available", or "built-in".