For purposes of classification in this article, there are 2 types of pistols: "Standard" and "Unique".

As of the March 15th Combat Arms patch, shotguns are classified as primary weapons. However, as they aren't as good as other primary weapons in most situations, you should still treat them like secondaries.

A pistol is a small, portable gun, capable of only semi-automatic fire, apart from the G18 which has a Burst function, and the Desert Eagle, which is capable of automatic fire (although still slow). Although Semi-Automatic pistols have a maximum possible rate of fire, the real rate of fire depends on how fast you can repeatedly click

. Standard Pistols have a fast reload and moderate damage, while Unique pistols have much higher damage (70 and more damage).

The Unique class consists of the Anaconda Black and Desert Eagle.

The default pistol that is free to maintain lacks in many aspects. It is the only pistol that has a five-hit kill and has relatively low accuracy. However, this pistol has a larger clip size and more ammo than the other pistols. Buying a better pistol to replace this isn't very necessary, unless you are going to play a Pistol-Only game.

The M92FS Silver is a shiny silver variant with slightly higher damage and slightly less recoil. It can be found in Supply Cases.

This special edition of the default pistol is basically the same in every aspect, except that it reloads faster.

The Colt MEU is the strongest "standard" pistol. To compensate for the strong three-hit kill, the MEU fires very slowly and has high recoil every shot. Along with high accuracy, this is a good all-around pistol. It costs a relatively great amount of GP, though, and doesn't come with a lot of ammo.

The USP is a very accurate pistol, but weaker and faster than the MEU. The USP borders around three to four shots to kill depending on the enemy's armor. The USP has the highest recoil of any "standard" pistol. The USP excels at long range due to its accuracy and close range due to the power.

A Supply Case upgrade on the normal USP, this version has green camo, a built-in silencer, and a slightly larger clip. Other than that, it is no different than the USP. Getting the USP Tactical from a Supply Case is not much of a challenge. On the other hand, you could just add a silencer to your USP and get almost the same thing.

Specializing in a balance of stats and very low recoil, the G23 isn't as accurate as the USP or MEU. It has the fastest fire rate with the exception of the K5. The G23 is often a satisfactory choice to replace the default M92 with, considering that it doesn't cost a lot. You also get a 15-round clip.

A special edition G23, this gun is absolutely no different besides the fact that it can be drawn faster. Along with its high rank requirement, and the fact that a draw speed improvement isn't worth 100 extra GP, not a lot of people have this pistol.

One of the most unique pistols in the game, this one is actually capable of selective fire between burst and semi-auto firing modes. It fires slightly faster and has slightly more recoil than the G23. Otherwise, this pistol is exactly the same as the G23. The burst ability alone gives this pistol a very hefty price.

The K5 is the fastest firing pistol, and it sacrifices damage to do just that. However, it is still stronger than the default M92. With additional low recoil, the K5 is the pistol that you can "spray" with the best. It has an intermediate clip size.

This beast of a gun, although classified as a "pistol", should be given a category of its own because it is completely unlike other pistols in the game. The Anaconda Black is a revolver that is a two-shot kill, but lacks speed to compensate. Even though the recoil is huge, the firing rate is so slow that the recoil will have settled by the time you can take another shot. The Anaconda Black also seems to be unpredictably inaccurate unless standing completely still and aiming carefully, which is hardly feasible because a scope cannot be attached, or any modifications for that matter.

It is allowed in Pistol-Only games because of its official classification as a pistol. 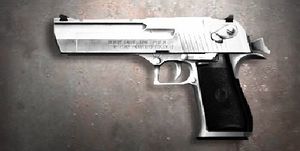 Another powerful pistol, the Desert Eagle is the most powerful weapon classified as a pistol, capable of one-shot kills (to the back of a light-vester). However, the Desert Eagle is horribly inaccurate compared to even the Anaconda Black, has very high recoil per shot, and also has deplorable rate of fire. An interesting aspect of the Desert Eagle is its automatic fire capability. It is the only pistol that has such a quality. By pressing and holding down

, the recoil goes straight up and the gun fires at a faster rate. However, if you want the accuracy, use single fire and crouch.