Modifications are type-sensitive, meaning that there are specific modifications for the gun categories. If you buy a scope for your M16A3, you can take the same scope off and put it on an AK47. However, you can not put it on an MP5A4 because the MP5 is a submachine gun. Make sure that you are in the right gun category tab when buying modifications.

A scope goes on top of your gun, and you can use it in-game by clicking

. Scopes provide you with magnification, a single aiming point that doesn't increase in size (like the crosshair does), lessens the recoil, and may also have a number of other benefits. The downside of using scopes is that you have a limited range of view, and your mouse sensitivity is decreased greatly.

Guns that can not be fitted with a scope are the G36E, AUG-A1, P90, and all Sniper Rifles, all of which already have scopes built in, as well as the UZI, all Shotguns, and all Machine Guns, which do not.

Telescopic scope with a estimated magnification of about 1.5x. The sight also provides you with real-time distance measurements to the impact location. If the number turns red, it means that there is too much range between you and your target for the gun to be effective. Costs 150 GP. 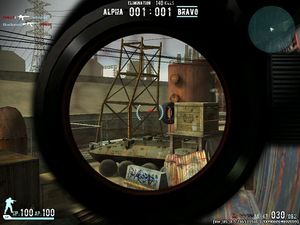 The view through the popular ACOG TA3 scope attachment

Telescopic scope with an estimated magnification of about 1.5x. It is exactly the same as the ACOG TA1 Scope, but instead of distance measurement, the TA3 displays your remaining health and ammo via two bars next to the red aiming dot. Costs 150 GP. Some people use these displays to keep their crosshairs in check (when the crosshair passes outside of the 2 bars, it is recommended to stop firing, and let the crosshair settle before firing again).

A reflex scope with a low magnification of about 1.1x, this scope gives a larger view than the ACOG scopes do, along with a +3% Aiming bonus. This increases the accuracy and decreases the recoil. Cost 150 GP.

This is a NX only mod. It is virtually a carbon copy of the ACOG TA1 scope without the "mesh" pattern. It has a standard 1.5x magnification.

This is a NX only mod. It has nearly zero magnification, but has an enormous sight size (the space it takes on your screen when zoomed in). It also has a +5% Aiming bonus, which increases Accuracy, and decreases Recoil. It also has a red dot scope, which helps more than you think.

Suppressors are cylindrical objects that are attached the end of the gun barrel, reducing the loudness of your gunshots. However, using a suppressor reduces your direct damage by 10%. Sometimes this does not change the number of hits to kill, but sometimes it does. The G36E's power, 33 damage per shot, is reduced to 30 with a suppressor, still a four hit kill. However, suppressing the UZI reduces its power from 20 to 18, making it a six shot kill instead of five. If attached to the L96A1, it's still one shot kill, but not against people wearing a Heavy Vest.

Guns that cannot accommodate a suppressor are the guns with attached/integrated silencers, Anaconda Black, Dragunov, all Machine Guns, and all Shotguns.

There are three different suppressors available to purchase. They all reduce gunshot noise, reduce damage by 10%, and cost 100 GP, but each of them also has one additional effect.

This simple suppressor decreases gunshot noise and damage, and its additional effect changes the gun's recoil. It redirects some recoil to the sides so that your gun will not kick upwards as much. This is noticeable if you fire through the scope of a S1 suppressed gun, the aiming dot will kick diagonally instead of straight up. While this is a good silencer for SMGs, it is not good for scope users because it increases diagonal recoil.

This suppressor decreases gunshot noise and damage, and its additional effect is the reduction of tracer bullets. Tracer is the bright yellow glow that bullets give off. The S2 Suppressor makes your tracers dimmer and appear less often, but does not completely eliminate them.

Some people with low-end graphics settings do not see tracers, because it is a potential lag-causer (and so can be turned off). It is highly recommended that if your computer can handle it, that you turn on the "Tracers" option in the graphics settings.

This suppressor decreases gunshot noise and damage, and its additional effect is the elimination of muzzle flash. When you fire any gun, other people see a cross-shaped flash of light from the end of your gun. This suppressor completely gets rid of the muzzle flash, making you less easily detected, and the only way to tell that someone with a S3 suppressed gun is shooting is to get shot, or hear their gunshot.

Although, some people with low-end graphics settings do not see muzzle flash anyways, because it is a potential lag-causer (and so can be turned off). It is highly recommended that if your computer can handle it, that you turn on the "Muzzle Flash" option in the graphics settings.

Magazine Modifications replace the default magazine of your gun, either making the clip larger or smaller. The time it takes to reload the gun is changed proportionately to counterbalance. Note that although the clip size is increased or decreased, the total amount of ammo always stays the same.

All guns other than the Double Barrel, Anaconda, PP-19 and P90, can be fitted with alternate magazines. The following table summarizes the magazine modifications and their effects.

This is a pretty basic magazine extension that costs you just 200 GP. You put it on, you'll have a larger clip and a slower reload. The clip extension varies according to what weapon type it's for.

The time taken to reload is increased by 10%.

The time taken to reload is increased by 20%.

The time taken to reload is reduced by 20%.

This Mod is a NX only mod. It reduces your clip size by 30% and increases reload speed by 30%.