Junk Flea is the smallest map that Combat Arms has to offer. But true to its name, Junk Flea is a junkyard that is filled to the brim with junk that serve as obstacles. Junk Flea is an extremely popular map because its small size facilitates exciting and quick-paced close combat, resulting in the fastest paced games and most amount of kills (or deaths) for everybody.

Below is a map of Junk Flea with the spawn points for each team labeled. Special features of the map are numbered in green. Darker gray represents a higher elevation. The semi-transparent purple line depicts a rough split between the areas that Alpha or Bravo team has more control over. However, because the number of sniping spots is very limited, everybody tends to run everywhere, and no place is safe. The map is quite symmetric in terms of Alpha and Bravo team's territories.

Because of Junk Flea's immensely small size, you can throw grenades randomly across the map and get kills up to about 80% of the time, especially when there are lots of people. Going on a massive killing streak and then getting blown up by a totally random grenade may be infuriating, but it is all part of the Junk Flea experience. 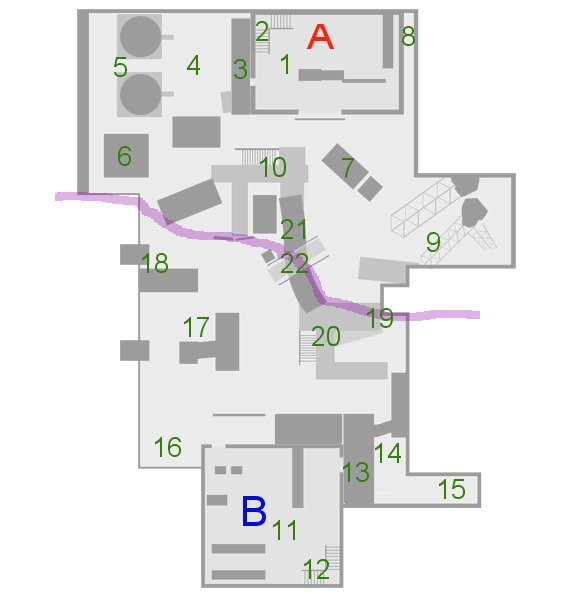 The area above and right of the purple line is mainly used and possessed by Alpha team. Entering this area if you are on Bravo team puts you at a much greater risk of being shot at.

All Alpha Team members will spawn in this room. Besides a few corners and objects to hide behind, there is nothing much here. Note that while rushing through spawn points is unwise for large maps, Junk Flea is so small that running through the enemy's spawnhouse time and again is okay.

The Alpha Spawnhouse has a main door that leads straight out to the Green Truck area, a side door that exits to the Alpha Flagspace, and also a staircase up the the second floor.

This area is quite blank, besides a lot of random junk off to the side. Bravo Team members can camp right above the staircase to kill unwary spawners coming up it. There is a doorway leading outdoors onto the balcony.

The glass windows on the wall can be shot through, however, you can not see through to the other side. Hackers often shoot through the windows to get kills.

With a good view of Junk Flea, this balcony is one of the places that non-rushers have an option to stay in. For some cover, just hide behind the door and nobody will see you, unless your gun barrel sticks out. Also watch out for the explosive green barrel that will kill you if somebody shoots it. Sniping from this balcony isn't as good as sniping from Bravo Team's balcony, because you can't see into the Upper Tunnel.

From the Alpha Balcony, you can jump to a small rectangular platform, and then to the Midstructure.

Without a doubt, this is where Alpha Team's flag will be during Capture the Flag. Even in other game modes though, this area is always full of gunfights and such. The Alpha Flagspace is also a very popular spot for grenade tossing, so it is recommended that you don't stay there too long.

From the Alpha Flagspace, you can go past the green tank and immediately be in Bravo Team's territory.

Whenever you shoot these tanks, a bunch of steam comes and makes a hissing sound, potentially misting up the Alpha Flagspace.

This great hunk of junk is of little use in Junk Flea, although if you camp inside the metal, you are harder to kill because bullets will rebound off the metal. You can also go around the Metal Tower for cover. Note that the wire fence next to the Metal Tower doesn't block bullets.

This area, so named because of a busted up green pick-up truck sitting right in the middle of it, takes up the entire northeast of Junk Flea. It consists of several shortcuts into Bravo's territory. There is also another green truck beneath the midstructure, you can hop upon it as a shortcut to the upper levels. The Green Trucks area is also very prone to random grenades.

This small niche in the corner is good for nothing but camping. Because of the angle, very few people will see you, but inevitably you will be blown up by a random grenade to the Green Trucks area. Both Alpha and Bravo teams can make use of this.

West of the area with the green trucks is a busted up crane that deflects bullets. Hiding among the scrap metal might protect you for a while, but not forever.

The heap of junk beneath the crane and a large purple storage container form a small corner, so infamous in Junk Flea that it is commonly referred to as "the corner". By being in that spot, you are visible to almost nobody unless they face you from the opposite direction. It is recommended that every time you happen to pass by the Green Truck area, you take a look at "the corner" to check if enemies are in or around it. Otherwise you could be assaulted from behind.

Junk Flea consists of only two levels of elevation: the ground and the upper structures. By being on the upper level, you have an advantage over people on the ground. You would also be less likely to be blown up by random grenades. Alpha Team's side of the central midstructure doesn't have much cover, besides a wooden box that can be easily destroyed.

When camping around the midstructure, always beware of people coming through the Upper Tunnel.

In Junk Flea, Bravo Team has the advantage of a wider-spaced area and a more places to camp. The areas are extremely easily taken over by Alpha Team. Conversely, Bravo Team can also romp through Alpha territory using various routes and shortcuts.

Bravo Team spawns here. The Bravo Spawnhouse is much larger than the Alpha Spawnhouse, which makes it more difficult to rush through and easier to defend. There are some storage racks that you can hide behind if you must take a short break. There is one large exit and one side exit. Staircases from a corner of the spawnhouse lead to the second floor and upper structures.

This area is much larger than the second floor of Alpha Team's spawnhouse. Again, Alpha Team members may camp here to surprise spawners coming up the stairs. There are also glass windows that you can shoot through but not see through.

Bravo Team's upper balcony is a much more flexible standpoint than Alpha Team's, due to the fact that you can actually see into the Upper Tunnel. If you are going to use a sniper rifle in Junk Flea, camping behind the door is the best place for it.

From Bravo's upper balcony, you can also get onto some low rooftop-like things, right above the larger spawnhouse exit, that are higher in elevation than the rest of Junk Flea and thus gives you a sniper advantage. Watch out for Alpha Team members camping on these, as they will be able to see and shoot all spawners exiting the spawnhouse.

This open area is holds Bravo Team's flag in games of Capture the Flag. Even on other game modes, however, it is the site of many firefights because Bravo Team members exiting through the side door meet up with Alpha Team people passing through the Square. Also make sure to look up, in case enemies shoot you from the elevated midstructures. Watch out for random grenades.

Good for nothing but camping, this area is a bit better than Alpha's dead end because you will meet up with more people, whether teammates or enemies. Good for defense in Capture the Flag, as you can just rush out and kill anybody who takes the flag. You can camp here until you get blown up by a random grenade, which is highly likely.

This back corner is used for spawn killing whoever comes out of the Bravo Spawnhouse. If you are on Bravo Team, be sure to look back here. Also, do not stay here for too long, as you will be blown up by a grenade or sniped afar from Alpha Team's balcony.

Two rectangular blocks of junk form a corner here that you can hide in for a quick break. You are completely covered on two sides, but it won't be long before somebody peers into the corner, which is a smart thing to do every time you pass. You can climb up a wooden box to get on top of the rectangular junk, this gives you a height advantage. If the box is broken, you can still get there by jumping from the midstructure.

Useful for both teams, a tank provides cover for rushing bravos and a wood box by the metal box gives a platform to shoot bravos rushing into the hiding corner. Beware of random grenades and upper/lower tunnel players. From the box, one can jump on top of the hiding corner box to stand behind another wooden box on top of that. From there, alpha can spawn guard.

Alpha frequently comes here to fire on bravo spawners coming out of the back door. Two armored vehicles provide a nice crack to fire on bravo players coming out of the door and on the balcony. While here, beware of headshots and random grenades. Bravo players can go under the midstructure to flank alpha players and get a few kills. To defend against this area, bravo players can stand inside their door by the green lockers. It is extremely difficult for alpha to see and provides bravo with a full view of the bravo flag area and the square.

Here is where Both Sides come most of the Time to fight. You can throw a Grenade to the Other side and get a kill or two 80% of the time. In the middle of the tunnel, there are cracks on either side. Players from both teams can come here to shoot at floor level players running by. Beware of enemy players going through the tunnel.

The best part about the lower tunnel is the fact that you can get easy kills off people who are running in it and are unaware that you are right behind them. Since it is a straight tunnel, there is nowhere you can duck or run off if someone starts backstabbing you. This is also a good place to plant mines. Since the tunnel is a narrow passageway, if the other team gives you enough time to plant all three mines in a horizontal fashion, then the enemies will have no choice but the shoot the stem. They can't jump over them, because the tunnel is too low, and they can't go across because the mines are covering the whole tunnel. By the time your enemies realize that the only option is to shoot the mines, someone else (possibly you) will have more than enough time to kill them off. Lots to do for one kill, but it works.

Melee Only is a popular choice in Junk Flea due to the small size of the map. Melee Only changes the gameplay drastically as well – it mostly becomes control of higher ground and camping in corners. High ground is important in melee matches, and Junk Flea especially, because while the enemy can only stab at your legs, you can stab at his head, as well as jump over him and try to attack him from behind, or have an easier escape route should you be low on health.

In Melee Only, controlling the tunnel and pushing the line back to the enemy base should be the main focus. In small games, camping in corners is recommended, in larger ones, pull as many of your teammates as you can into a brawl, and aim for the head.