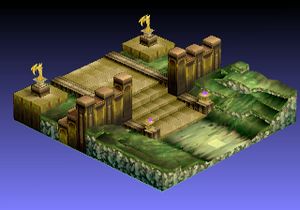 Your first strategy should be to get rid of the Zombies. Have a character stand in front of a Zombie until all of them are blocked. This way, the Zombies cannot move from their positions. When attacking them, try not to use standard attacks. They can counter at least once. Also, the Zombies can Poison you with their Specials, so be careful. Have one or two (Two if your'e new) Healers standing at long range to provide supposrt. After the Zombies are gone, you need to destroy the Geo Symbols in order to remove the barrier. Don't be so hasty. See those two Wingmen standing nearby? If you have any Archers or Gunners or even Spear-users, have them attack the Wingmen from behind the barrier. The enemies will not move or attack. You could also lower the barrier and have your close-range fighters handle them, but them the other enemies will join in and it could be a bloodbath. Once the Wingmen are gone, focus on the Brawlers standing around. Brawlers are not to be attacked normally. They have the second most powerful Countering ability in the entire game, second only to the Ninja. Either use Magic, or Bow/Gun attacks to defeat them, or only use Special attacks. Keep your Healers safe and working, and the map should be cleared out. 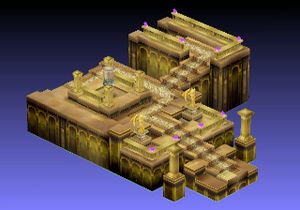 Here's a map where a mistake on your first turn could cost you. The Yellow Geo Symbol saps your health by 20% every turn. So, have a fist-user knock the symbol out of the colored bounds. DO NOT destroy the symbol! That will cause a Geo Chain that can destroy your fighter and any other ally stupid enough to be on the Panels being chained at the time without destroying one enemy except MAYBE the Healer. Now, after you knock the symbol away, you now have one additional attack when attacking normally and will also have your HP restored by 20% every turn. However, the enemies will have this benefit, too. The strategy here is to use the effect to your advantage while preventing the enemies, which are mostly Zombies, to do the same. Stay out of the Zombies' range and only attack up close when you absolutely have to. The Manticore is pretty tough, almost as tough as Mid-Boss, but still killable. It's the Healer and Scout that you really have to worry about. Now, if your'e playing the DS version of the game, the Healer may be able to hit you with a spell called Slumber, which puts you to sleep. As far as I know, it's an enemy-only spell. As for the Scout, he may seem harmless with just a gun, but with the ability to attack twice, he's a deadly threat. Kill him first, regardless of the situation. 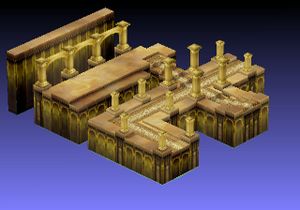 This map's a war of who can last the longest. The Zombies have you completely surrounded and outnumbered. The Thieves on the far east corner are nothing. Ignore them for now. Now, the first thing you should do is to destroy the wall of Zombies right in front of you. They even have their backs turned, so you get a power boost from attacking them from behind. Destroy them with your most powerful attacks, SP be damned. Being swamped is worse than being picked off one-by-one. After the wall is destroyed,(Or at least greatly weakened.) prepare for the gang near the north corner. The same rules apply, attack mercilessly and forget about SP, while killing any Zombie from the wall you may have missed. Kepp doing this without ever moving from your position. Witches, Gunners, Archers and Healers should be right next to or near the Base Panel in the last rows, protected by other characters. If one of those characters die, replace the abandoned square with another. The Healers and Witches are your lifeline and absolute last defense. Once the strategy's been implemented, the Thieves and one Red Zombie sitting on the west corner of the map should be your last worries. Go after the Zombie first, and gang it with a combo. Once that's done, head for the Thieves. If you lasted against the Zombies, these guys are child's play. They are ill-equipped and weak. Be careful of the higher-class one, though. He has a Gun. 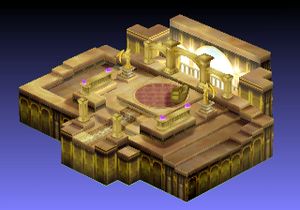 If you hate Healers, now's a chance to beat up on some. Hoggmeiser is protected by a wall of Zombies, two Healers on power-receiving panels. Anyway, your first order of business should be to get rid of the Healers while blocking the Zombies with other characters. To go about this, you will need 2 Fist-users. Power doesn't matter too much, but it helps. Have them both knock the Healers off of the panels with Triple Strike or Tiger Charge. Then get the two characters of your choice to move onto and take the Healers' place on the aformentioned panels. Try to destroy or weaken the Zombie wall on the first turn, but end if you have to. (Do remember to account for the lack of space you will initially encounter here. Archers, Mages, Gunners, and Spear-users shine on this map.) The enemy Healers aren't a major problem if they aren't on their panels, just focus on the other enemies. After you fight, Hoggmeiser should be your last worry. Just like Mid-Boss. He lags around for a turn or two, then moves in. If your'e new or underpowered, you WILL have casualities. Don't panic. Combo him the same way you did Mid-boss. Remember that Hoggmeiser has a special attack that hits any character next to him in any and all directions, so keep your healers on hand. However, try to attack his elemental weakness and from behind. Take into account his higher HP, and keep your Healers supporting you, and you should have this map in the bag.

Upon revisiting this map, Hoggmeiser is replaced by a Manticore, but the other enemies remain. The strategy remains the same as well.