In the starting cutscene for this chapter, Spider-Man's spider senses are going on overload. Realizing something must be up, he takes the suit and leaves Mary Jane once again, but this time to face a potentially bigger threat - Spider-Man comes face to face with Venom, thought dead until now. Venom attacks, Spider-Man dodges, and the battle begins. 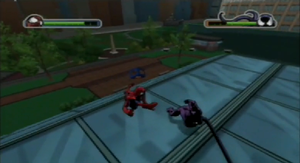 There isn't really much of a strategy to this battle other than the obvious dodge-and-attack. Your goal is simple: beat up Venom. His long-range tentacle attacks can prove to be quite a hassle here, along with, if he gets close enough, the fact that he can feed on you. This not only gets your health down, but also gets Venom's health up; it's a lose-lose situation. Attack Venom with punches and kicks and try to move away when you see him getting ready to attack. There's one large advantage to keep in mind here: Venom is slow. Spider-Man's agility wins over Venom's by a mile, and even with his high jumps, he also has extra boosts of speed in the forms of web zips and web swings. Speed is a great advantage to have when it comes to dodging, especially while facing off against Venom and his long-ranged tentacle attacks. Punch, kick, jump around and avoid his attacks, and then pummel him with punches and kicks again. Eventually, the battle will go onto the streets and this is where your gameplay ends. Spider-Man is about to be finished off by Venom, but is saved by Silver Sable and the Wild Pack, who then take Venom into their custody.