Ultimate Spider-Man/Hell of a Mess 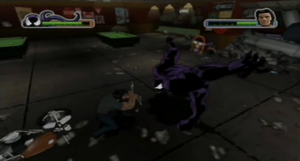 All you'll have to do in this battle is take down Wolverine.

In this simple chapter, all you'll be doing is continuing Venom's night with a battle. As it turns out, the motorcycle he threw in Feeding Time was actually Wolverine's. Wolverine, unsatisfied with Venom's behavior, decides to take matters into his own hands and fight Venom himself. This battle, being Venom's first boss battle, shouldn't be all too hard. Wolverine will constantly block and dodge and this may make the battle a bit harder as agility isn't Venom's strong point, but keeping using the tentacles for long-range attacks and Wolverine will go down eventually. Don't forget to feed on the people in the area to keep your health up. It's best to start feeding right after Wolverine lands a hit on you (if he manages to). Near the end of the battle, Venom faces Wolverine in a power struggle. Press

alternately and rapidly to try and get the tick marker into the green area.

When that's over with, the battle will continue in another room which seems to have an Asian theme. Finish the battle in this room by taking out the little bit of health Wolverine has left and Venom will finally have Wolverine beaten. At this point, the chapter ends and the point of view switches back to Spider-Man.