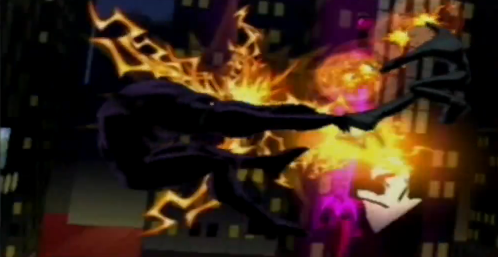 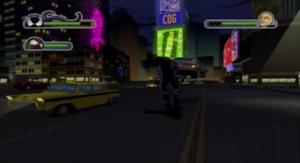 Throw anything you can at Electro.

This is the battle with Electro for the right to kill Spider-Man. This can be one of the more challenging boss fights. This fight plays very differently from the others. When you are fighting Electro you must grab mailboxes and cars with your tentacles and beat him down with them while dodging his electric projectiles. Chances are that you will lose health much faster then he does. When you are low on health, you can just run to the left or right sides to feed on some people to gain health. This will give him a chance to damage Spider-Man but he'll survive. Stop him from making too much damage to Spider-Man by throwing a nearby car. Then make you way over and continue the assault with tentacle attacks.

After a while Electro will power up by using the electricity from a light-up billboard and become blue. At this point your objective is to attack him with mail boxes and try to get him near fire hydrants. When he's above a hydrant, punch it to blast him with water, turning him human and vulnerable. Don't stop attacking him in his blue stage because somehow he may refill his health. The main strategy is to attack him with Mail Boxes and beat him with fire hydrants.