In the Nintendo DS version, you fight Silver Sable on top of the Daily Bugle. This fight can be annoying because of all the long range attacks. Between Sables' ninja stars and her thugs' guns, you have a lot to look out for. This is basically a melee match that involves a lot of tentacle flailing. It is recommended that you try and pull off Venoms' tornado combo as often as possible so you can hit Sable as well as take out her thugs who like to creep up from behind. Don't try and feed on anyone because you'll just get ninja starred to death. 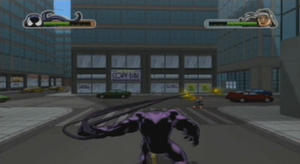 Keep your distance and use nothing but tentacle attacks.

In the console and PC version, the chapter starts off with a cutscene where Eddie Brock is imprisoned once again. During a talk with Silver Sable, Eddie transforms into Venom and escapes the cuffs. The two drop from the airship and have a mid-air fight before reaching the streets, where the battle continues. Silver Sable is able to knock Venom down and at this point, the boss battle begins. This battle is pretty simple, with only two tips to follow: don't try to feed on Silver Sable as all that will do is hurt you, and spam tentacle attacks. Feeding on people is a bit risky, so try to hold out until the battle ends and try not to get hit. If you do need health, try to knock her down and then go for the nearest civilian. Also remember to keep a distance between you and Silver Sable. Her kick and punch combos can be dangerous up close, even knocking Venom down. At a long range, Silver Sable shoots from her gun, with bullets that are easier to avoid (by jumping) than her punches and kicks.