The Main Street is the principal area for shopping within the town. It is located in a separate area across the train tracks at the top of the town.

The Museum is a large stone building used to display collections of bugs, fish, fossils, art and deep sea creatures. Blathers is the Museum Curator and can be found in the lobby. During the day Blathers will be asleep but he will wake up to talk to players.

The player can donate items to the Museum collections.

The Able Sisters is a shop with various items of clothing for sale. It is owned by sisters Sable and Mabel and along with buying existing clothing, the player can create their own designs. There is also an accessories store attached, which can be accessed via the The Able Sister or by it's own entrance on the outside of the building. The accessories area is run by Labelle. 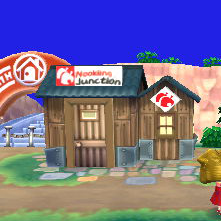 Nookling Junction is run by Timmy and Tommy Nook and sell various items including tools, paper, furniture and Fortune Cookies. The shop can be upgraded 4 times and will expand to include more items for sale. For info about the upgrades see Nookling Store Upgrades.

The Post Office is where Pelly and Phyllis work, and where one can send or save their letters to anyone in their town or their future self. You can also download DLC by talking to Pelly or Phyllis at the counter and selecting the third option. Lastly, it houses the ABD, which is where you can repay your home loan and access your in-game bank account.

Tom Nook has retired from selling furniture and is now a dedicated realtor. His shop features a variety of samples of roofs, pavement, fences, walls, mailboxes and doors which Tom Nook can customize your house with. You can also talk to Tom Nook to discuss how you want to expand your house.

The Photo Booth is a small machine located outside one of the buildings on Main Street where you can take a picture of your player character for 500 Bells. The picture is required for your Town Pass Card, which is needed to go to other players' towns or invite other players over.

The Garden Center is run by Leif and sells seeds and tools to make your village look nicer. This tiny store will sell two flower seeds, a sapling and an axe or a watering can every day. Once the Nooklings Store is upgraded to T.I.Y, the Garden Center will merge with the Nooklings Store into one large building, which also expands the center's inventory. The garden section of T.I.Y. offers the same selection as the original Garden Center, but now also includes two starts for growing bushes as well as a house plant that functions as a piece of furniture. Once the Nooklings Store expands yet again into T&T Emporium, the store will also offer an additional tool, a bag of fertilizer and either a Persimmon or a Bamboo Shoot.

The second floor of the museum is managed by Celeste, Blather's sister. There, you can purchase items exclusive to the gift shop, including improved, silver versions of tools like the Silver Fishing Rod once you have donated enough of a certain category to the museum. You can also rent out an exhibition room for 10,000 Bells, which is an 8x8 room that you can place items in much like a room in your house. The 2nd floor lobby also contains lockers to let you access your stored items, making it easier to get items needed for exhibits.

On random days, a fortune teller named Katrina may arrive in your town, giving out readings for 500 Bells, telling you your luck for that day and recommending an article of clothing to increase your luck. After enough consultations she will decide to move in to your town and give out readings every day, and the shop will be added to the list of Public Works Projects. Once built, Katrina still does the same routine when consulted, but staying there permanently means that players can get readings every day. Katrina will also occasionally offer to sell a rare item for 10,000 Bells.

The Dream Suite is where players can access the Dream Town feature. The suite is run by Luna, who will instruct about the process of uploading and visiting Dream Towns. Dream Towns are the towns of other players that you can visit. As these towns are just a dream, players can do anything they want, like chopping down trees, without affecting the real town. However, visitors cannot access the town's Main Street or enter the Town Hall or Re-Tail. Players can also get custom designs from the town's residents if the player who uploaded the town agreed to share them.

In the suite there are two different furniture that you can lie on. The couch at the back lets you submit your Dream Town to Nintendo's database, as well as update the town each day. Frequent updates are recommended as the Dream Town will be removed from the database if it had not been updated for a long period of time. Updating daily also lets you get an effortless 5,000 Bells from Luna. As for visiting Dream Towns of other players, you'll have to lie on the bed. You can choose to go to a Dream Town by entering a specific Dream Address, searching a particular region or just find one at random.

Club LOL is a live venue that hosts K.K. Slider's daily performances. The venue is open starting at noon, but K.K. Slider will not make an appearance until after 8 p.m. You can still enter Club LOL before that time to find Dr. Shrunk preparing for the night's performance. Give him fruit and he will teach you jokes, which are emotions similar to the ones often used by villagers. From 8 p.m. to midnight, K.K. Slider will appear as DJ K.K., who will play remixed versions of his songs. On Saturdays, K.K. Slider will return with his original acoustic guitar, performing songs that players can request and giving out bootlegs of these songs.

Kicks the skunk has stopped shoe shining at the city and chose to start his own shoe shop at the main street. His shop of the same name sells a variety of footwear, two socks and four shoes.

Shampoodle is run by Harriet, who offers to change your look once a day for 3,000 Bells. You can choose to get a haircut, some makeup which lets you change your head to a Mii on your 3DS, or some color contacts to change your eye color. After 15 haircuts, Harriet will start offering hairstyles of the opposite gender when going for a haircut.

Nookling Junction is the initial version of the store when the mayor moves into town. This wooden shack sells the basic necessities, but has a very limited selection of items. There will be 2 pieces of furniture, two tools, a Fortune Cookie, some wrapping paper and a stationary in stock every day.

T&T Mart is a convenient store, and with longer opening hours than any other store, it certainly is convenient. It now sells 3 pieces of furniture, a wallpaper, a carpet, 3 tools, 2 Fortune Cookies, some wrapping paper, a stationary and a bag of medicine each day. There will also be an electronic catalog installed that lets you re-order most items that have been in your inventory in the past.

Super T&T has an even more expansive selection of items, but loses the long opening hours of T&T Mart. It carries 4 pieces of furniture, one of which is always a wall furniture, 2 wallpapers, 2 carpets, 3 tools, 2 Fortune Cookies, 2 stationaries, some wrapping paper, a bag of medicine and a melody card. The melody card is an item exclusive to Super T&T and its upgrades. It functions like normal stationaries, but you can also attach a melody on the card similar to making your town tune, letting the recipient hear the short song when they read the letter.

T.I.Y. is a major expansion from the Super T&T, mainly because it has merged with the Garden Center to form a single home center. There is now a corridor connecting the main shopping area to Leif's gardening section, which also offers a wider selection of plants. T.I.Y. itself sells 5 pieces of furniture, one of which is a wall furniture, 2 wallpapers, 2 carpets, 3 tools, 2 Fortune Cookies, 2 stationaries, some wrapping paper, a melody card and a bag of medicine. It also sells a genuine K.K. Slider album, meaning that you no longer have to wait until Saturdays to expand your collection of music.

Upgrading from a home center into a full-fledged department store, T&T Emporium now has multiple levels for each department. The first floor sells more practical items, which are 3 tools, 2 Fortune Cookies, 2 stationaries, some wrapping paper, a melody card, a bag of medicine and two K.K. Slider albums. It is also the floor that contains the Garden Center, now integrated into the floor instead of being located in a separate room. The second floor is for interior design. The items sold here are 2 wallpapers, 2 carpets and 7 pieces of furniture, two of which are wall furniture.

Finally, the top floor is Gracie's luxury boutique, GracieGrace. The items sold here are much more expensive than other shops, but cannot be reordered from the catalog. The store's entire inventory will also change every season, offering completely new items once every three months. There are 5 pieces of furniture, a wallpaper and a carpet for sale, all part of an exclusive furniture set for that particular season. There is also 2 exclusive hats, 2 exclusive shoes and 6 exclusive apparel.