This is an archive of past discussions. Do not edit the contents of this page. If you wish to start a new discussion or revive an old one, please do so on the current staff lounge page. 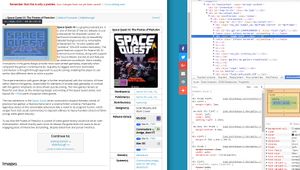 An example fix. The thumbnail div (highlighted on the right) has been inserted between the two infoboxes.

I came across a glitch in some of our page layouts that have a title screen image at the start of the article. Check out Space Quest III: The Pirates of Pestulon for an example of an affected layout. This does not affect {{marquee}} like on Donkey Kong because that does not use CSS' float.

The title screen appears below credits, not because of a header issue, but because we added the social media text box table without combining it into a single div. Since the infobox class has the clear:right attribute, the social media text box table is forced downwards and it starts a new block on the page (forcing all other in-line objects downwards). To get around this, I propose adding a titleimg parameter that would add the thumbnail div between the main infobox and the social media infobox tables. See the image on the right for a highlighted fix (code and layout-wise). Can you find a better fix or propose a different solution? --Notmyhandle (talk • contribs) 05:08, 22 March 2017 (UTC)

I may have found a superior solution. I wrapped both tables in a div, floated right, and that seemed to do the trick. Anyone have an even better solution before we add it? --Notmyhandle (talk • contribs) 05:16, 22 March 2017 (UTC)

I do! A one-cell invisible table. See the "Dragon Slayer II: Xanadu" or "Ultima III: Exodus" main pages, as examples.
But I would support your idea of "title images" instead of "box artworks" in the infobox. I always considered the title shown by the game itself as the "TRUE title", and the title on the box or elsewhere (if different) just as a mere "official title". This is just my humble opinion, and nothing more. --Abacos (talk) 14:30, 16 May 2017 (UTC)

The boxart is what people see when they're looking to buy the game, or have the box on the shelf. It's generally more recognizable than the first splash screen from the game. My view is that all those extra images can just be put in a gallery below. -- Prod (talk) 22:47, 27 May 2017 (UTC)

I agree with Prod. Indeed, I only play very old games, mostly abandonware, where you can get the software only. Still, when the titles on the screen and on the box are different, I consider "true" the one on the screen and "wrong" the one on the box (and again, maybe this affects only the old games I play). ---Abacos (talk) 14:05, 16 June 2017 (UTC)