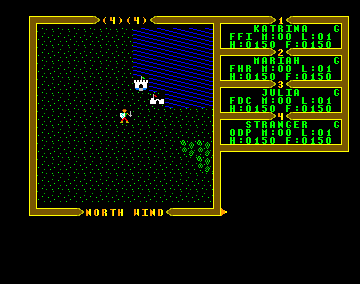 You start the game near the town of Britain and Lord British's castle.

First of all, enter the town of Britain and purchase weapons for your characters. Afterwards, pay a visit to Lord British.

Every character starts with 150 Gold Coins, 150 meals, a dagger, and clothes. The first thing to do is to get better weapons. Enter the nearby town of Britain.

As soon as all characters have a weapon, their first goal should be to earn experience points (EXP) and gold pieces (GP). Every 100 EXP gained, a character gains a level; then, he/she should talk to Lord British, and the king will increase the max HP by 100. The four attributes are improved in a different way (later, in Ambrosia).

Gold pieces can be used to purchase food and armor. Occasionally (not in the NES port), defeated enemies will also leave behind some equipment. Equip the better armors and sell the rest; sell melee weapons, as they are less useful than ranged weapons.

Most services are available in Britain and in the nearby castle. Therefore, there is no need to visit the other towns right now. Actually, the result would be to consume food, thus increasing your expenses.

Leave Britain and explore the mainland of Sosaria. 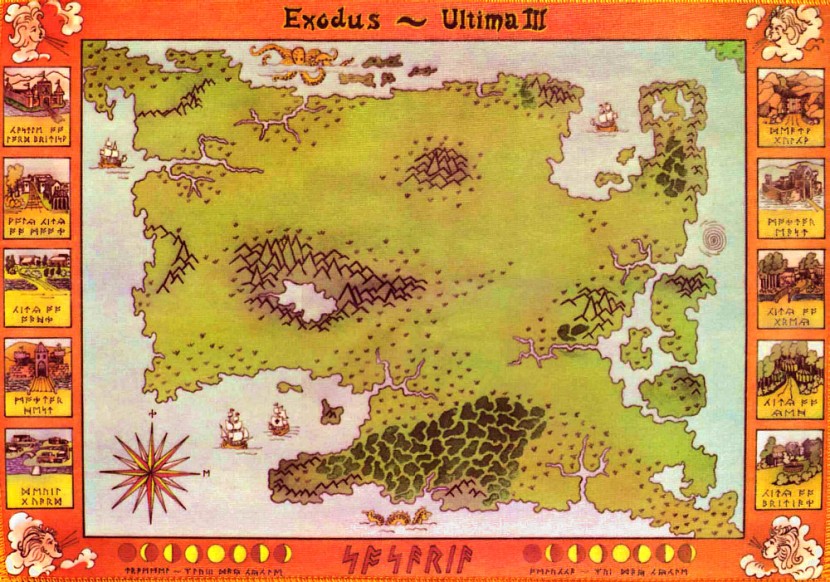 Mute map of Sosaria; Britain and the castle are near the bay in the north-east.
The location of towns, moon gates and dungeons is not marked, but right now you should stay away from them anyway. 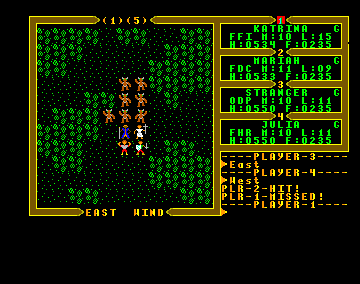 Some enemies are more powerful than others. Every enemy can move and attack diagonally, but the four heroes cannot.

Of course, this formation shows the priority when purchasing and equipping armor. That is, the "frontmen" need an armor as soon as possible.

In the NES port, the artificial intelligence of the enemies is more limited. If you put your characters in a vertical line, all enemies will line up to attack the frontman. The other party members can then back up the first one with ranged weapons and magic missiles. 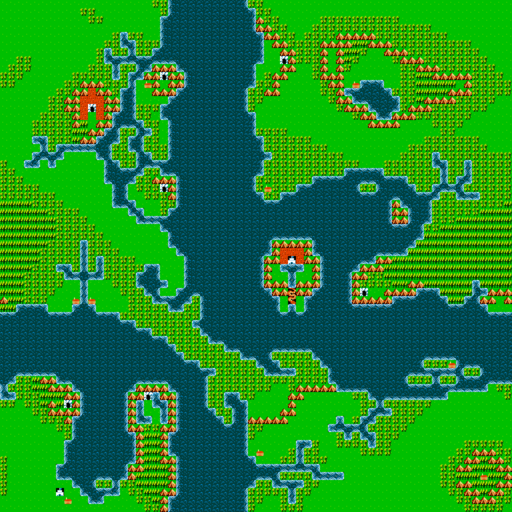 Map of Sosaria centered on the sea; especially useful for the NES port.

In order to get a ship, you have to fight a pirate ship. Approach the pirates from an angle, so that their cannons cannon cannot hit the party (no cannon fire in the NES port).

From the manual: To sail a ship, one must learn the ways of the winds. Your ship may not sail against a wind, but must tack around it. Watch out for sudden shifts in the wind for the wind is a fickle elemental force.

While onboard a ship, you can [F]ire cannons to wipe out enemies that are too strong for your party, or enemies that won't drop a chest. The characters earn no experience when they fire cannons. Fighting coast enemies from aboard a ship gives a tactical advantage to your party: enemies have to line up on the boarding bridges. On the other hand, enemy encounter rate is sensibly lower when travelling by ship: the gold you earn will barely cover food expenses. Better leave the ships where the whirlpool cannot easily engulf them (e.g. a river) and proceed on foot.

Not so in the NES port. First of all, enemy encounter rate is not lowered onboard a ship and food consumption is slower. Secondly, pirate ships (and some strong enemies) start appearing only when a party member reaches level 5. Therefore, it is advisable to stay onboard as much as possible when you conquer a ship. In the NES port, the party can only have one ship at a time.

It is advantageous to park one between the mainland of Sosaria and the island of the town of Death Gulch. Because of the convoluted water ways around here, you can often leave a boat at this location for a long time before it is swallowed by the whirlpool and it is very convenient to just walk across the boat and gain access to the town. It is also handy because it is near castle Britannia.