It is not mandatory to explore all the seven dungeons. In order to collect the four Marks and meet the Lord of Time, it is enough to explore three Dungeons, or four in the NES version.

Of course, depending on your team you might need to change priorities. For example, if your only character with healing Cleric Spells is a Ranger (unlikely choice anyway), it will become necessary to maximize his Wisdom and Intelligence.

The following table shows the minimum number of dungeons necessary to clear the game (without cheating):

Also note that different releases of Ultima 3 have different "treasures" in the bottom level. The following table reports the differences between the earlier ports and the two more advanced versions. The 16-bit ports are for Amiga and Atari ST; all ports by Ponycanyon are identical to the NES port.

As a curiosity, the following table reports the naming differences: 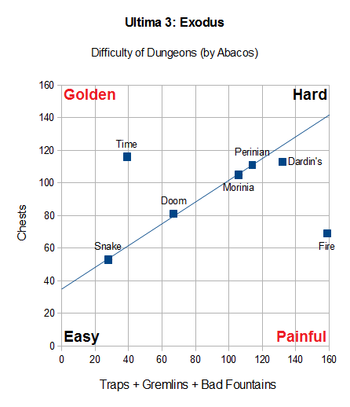 The total number of traps includes the sum of traps, gremlins, poison fountains and damage fountains. Dark winds are not included because they are harmless, they just cause darkness.

Most items of interest are located on the deepest floor of each dungeon. The main exception is the Mark of Kings.

In the diagram below, floors with a healing fountain (H) are highlighted in green. A dungeon can be easier if there are more healing fountains and if they are evenly distributed.

Function of the Marks[edit]

Each member of your party will need to have four special Marks branded onto their bodies to complete the game. You get them by touching the hot metal rods that are found in the dungeons. All of your characters should hold all four of the marks.

In the NES version, each Mark has a different appearance.

Initially, you'll be able to get to a maximum of 550 health points, provided you have enough experience, by (T)ransacting with the King.

With your 550 points, go to the dungeon in the northeast corner of Sosaria, beyond the forest. You'll recognize it by its waterway. In the first level you should find two "hot iron plates", one of which you should touch. They yield the Mark of the King. With the Mark of the King, you can now get up to 2550 health points, again provided that you have enough experience.

If you're playing the NES remake, you will have to look for the Silver Pick at the bottom of the cave of Death (originally Dardin's Pit)

Go to top
← Shortcuts and cheats | Dungeons | Dungeon of the Snake →