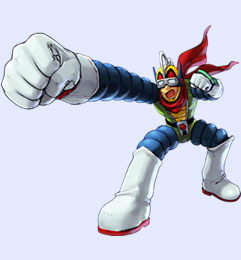 Namco's Japan-only 1988 beat 'em up arcade game, Bravoman is divided into thirty-two stages; in the City, Ninja Dojo, Bonus Collection, and Secret Laboratory stages its eponymous main character must use his bionic limbs to attack the forces of Dr. Bomb's army. However, any other kind of contact with them (apart from landing upon the head of a Baninga) will cause injury to him - and if he should ever run out of energy, this game's old "stage clear" theme will be heard from the Yamaha YM-2151, as he reverts to his original form of an ordinary working-class Japanese businessman and returns home to his disappointed wife and children. Most of the enemies will leave Fuku (

) behind when defeated, and every time Bravoman collects ten of them, his sort-of-partner Lottery Man will appear, and leave a powerup behind for him to collect in mid-air; he also appears at the end of most of these stages to give Bravoman additional energy bonuses, in the form of onigiri: one for every ten Fuku he has collected during the stage. However, if you take too long over any of these stages, Ugo 401 will fly into view from the left side of the screen and try to ensure Bravoman's reversion to his original form by firing laser beams at him - and as you will know by now, these rays will drain his energy very quickly and he cannot move when one is touching him. It is also not worth fighting him unless you collected a Kantsūken powerup earlier in the stage or still have a few atoms remaining after collecting a Hadō-dan powerup; even if you do manage to kill him, he will eventually come back to a stage to try and ensure Bravoman's reversion to his original form again.

In the Ocean stages, Bravoman will transform into a fish-type creature and must fight the underwater forces of Dr. Bomb's army by firing missiles at and dropping depth charges on them instead of using his limbs; however, any kind of contact with them in these stages will cause injury to him (even if it is where his arms, legs or head are located). And even though the rocks that he will encounter on the seventh, sixteenth, twenty-fifth and twenty-seventh stages are harmless, they will slowly but surely drain his energy, if he gets trapped between one and the left side of the screen - but when he collects the game's only underwater-based Kantsūken powerup on that sixteenth stage, his missiles and depth charges will become five times more powerful for that stage's remainder. Six of the stages are also of the "immediate boss fight" variety; this means that there are no regular enemies in them (however, in the case of the thirteenth stage, there are two indestructible Tekyuu) and you will immediately be drawn into a battle with one or more of the boss characters once you have started running to the right. They are indicated by the letters "IBF" on that Table of Contents below - and if Lottery Man appears to leave a powerup behind for you after collecting the Fuku that the first one you killed left behind, you should jump up and collect it regardless of what it is for the extra energy, power, or points. You should also remember that if Lottery Man is hit more than ten times during the course of this game, he will refuse to give any more powerups to Bravoman and appear only to mock him; but after a few stages, he will eventually forgive him and start helping him again.