Chrono Trigger is a real-time turn-based RPG; this means that during a battle the longer you take the more turns the enemy will receive. Thus, it is imperative that all actions are thought out before they must be made, and that you know your characters and equipment well.

Like any RPG, grinding (fighting enemies for long periods of time to achieve higher levels) and the overuse of items are the two simplest tips for beating this game. Be patient and don't be afraid to heal (gold is not hard to come by).

Chrono Trigger is open-ended, allowing for non-linear progression through the use of multiple endings and open adventuring (flight and time travel). This means that you can change elements of the game by doing things out of order (although most of the time level restrictions still apply, i.e. difficulty).

Just keep in mind that if you don't follow the walkthrough, focus on exploration rather than the adventure itself to get the most out of this game. 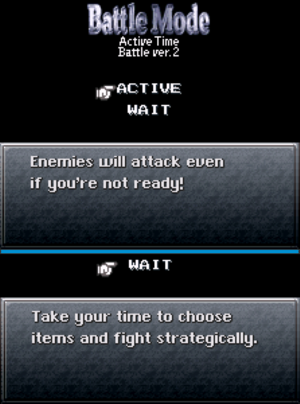 The first thing you will encounter within Chrono Trigger is a prompt as to whether you would like the battle system to be set to "Active" or "Wait".

This is essentially for player preference, but if you don't know the difference, choose wait. Wait allows you to take your time when selecting entries within the technique or item listing without having to worry about your opponent. Active, where the action is not paused in the item or technique menus, has a higher difficulty and follows the more traditional approach of real-time battles. In both cases, waiting at the main combat screen will allow action to pass freely (action bars will fill up, and enemies will either attack or leave their defensive stance).

and scroll to the right a few windows).

For more details on this topic, see ../Characters.

Throughout the game, characters will join and leave the party as the story progresses. Only three characters can be used at a time and they cannot be switched within battle. Outside of battle they can be switched via the options menu (

) or even quicker by pressing

. Leveling characters, progressing through the plot, equipping equipment and using tabs are the only way to improve a character's strength. 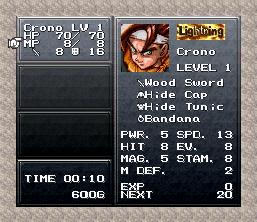 This is the status screen.

For more details on Exp and Next, see Chrono Trigger/Experience.

After every battle, you will receive experience points (Exp), gold, and Tech Points (TP). The amount you get depends on the enemies you defeated. If an enemy runs away, or if you run away, you will not receive any bonus from that enemy.

Experience points are used to level up your characters. As they level, they will become stronger by gaining permanent bonuses to their stats.

Tech Points are complimentary to Experience Points. Tech Points govern what abilities your character will be allowed to use (techniques are not gained by leveling) and so battling a lot is the only way to unlock more powerful techs, which will be necessary to more easily overcome your opponents.

For more details on this topic, see ../Equipment and items.

Items have various uses, but are mainly used to recover HP, MP, or revive a fallen ally. Because of this, it is possible to have parties made up of characters that have no healing techs.

Tabs, a rare type of item, are used to permanently boost a character's statistic (specified by the tab).

Equipment is used to modify primarily attack and defense, although stats and other effects also come into play on better equipment farther in the game.

Both items and equipment progressively get better at the same time as you make your way through the game. Most of the time a new weapon or item will be better than what you previously had, however the effects are really what determine what you'll be using near the end of the game.

Like any traditional turn based RPG, Chrono Trigger only differs with the option of the Battle Mode (active vs wait). Again, it's best to try both styles to find what you like best (you can change the option at any time). Player controlled characters and CPU controlled enemies will take turns performing actions, as specified by either player. A battle ends either 1) when one team is killed, 2) when one side runs or 3) a special condition is met (an event or cutscene takes place).

Battles are initialized by events within places, since they are not encountered on the world map. Such events include normally running into monsters, flicking switches or other player initialized events.

If your entire party dies while in battle, you'll have to load your game! Make sure you save often, and don't worry if only one or two of your members die, after battle they will be revived with 1 HP so you can heal them up as normal. Remember that you can use revives if need be to keep the fight going, and later on you'll also gain revival abilities for one of the characters.

In the beginning of the game, exploration will be limited to walking and the use of ferries. Eventually better modes of transportation will allow you to travel faster and to unexplored areas. There are no random battles in Chrono Trigger so unless you are racing the clock, don't worry about time or roaming around.

While the walkthrough is mostly designed around a new game where you will be getting all of the equipment for the first time, Chrono Trigger also has the option to start a new game with benefits after you beat the final boss after journeying through The Black Omen (thus completing the main plot).

With a New Game +, You'll be able to take all the levels and characteristics of your characters and the items and equipment of your save file (with a few exceptions such as items received from NPCs, e.g. the Masamune and Bike Key) and be able to start the game over with powered-up characters. In a New Game +, it's also possible to challenge Lavos at almost any point by using the right telepod at the Millennial Fair. The game is considerably easier in a New Game +, making most of the challenge about completeness and finding all of the endings.