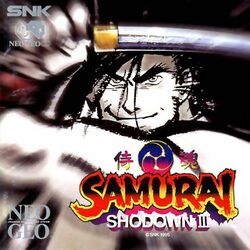 In keeping with their curious habit of using the third game in a series as a place to wipe the slate clean and start fresh, SS3 was to be the start of a bold new direction for the franchise.

The most obvious difference between this game and the others in the series is the notably darker aesthetic. The "sillier" characters from the previous games have been excised, and even the kabuki master, Kyoshiro Senryo, received a bold redesign, transforming him from a flamboyant stage performer into a grim-faced, muscular man. All of the characters have been completely redrawn, and impressively so. The animation is surprisingly smooth for all characters.