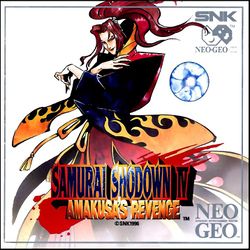 After Samurai Shodown III was received more or less poorly by the fighting game community, SNK again went back to address the complaints, and tried to deliver a followup that would hopefully regain some of the magic that had made Samurai Shodown II such a hit.

The most obvious change is visual, with dramatically adjusted color palettes for the individual characters, generally brightening them up and reducing contrast, in the attempt to make the game more cartoonish. Aerial blocking was removed entirely, and the switcharound move, which enabled a player to shift quickly behind the other's back, as well as the dodge (Evade; side-step), in which the move virtually brings a semi-3D environment to the defense in attempt to use each sword more effectively.

Following the same philosophy, some of the older characters were restored, such as Charlotte, Tam Tam and Yagyu Jubei. The entire cast of the previous game also returns, though some have been retouched to further enhance the cartoonish look.