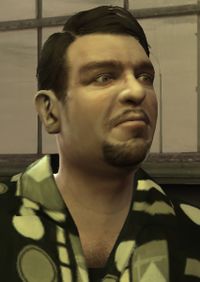 Niko's cousin Roman has lived in Liberty City for the last fifteen years, and is your first point of contact in the city.

Your exuberant cousin has had a little too much to drink to celebrate your imminent arrival in Liberty City, and decides it would be better if Niko took the wheel for the trip home.

Follow the yellow GPS line on your mini-map to Roman's less-than-impressive apartment. Niko is understandably disappointed by the harsh reality after Roman's optimistic email descriptions of his standard of living, but Roman's got to take the car back to the cab depot. He gives Niko directions to the depot as he rushes out the door.

Get into the cab and follow your GPS to the hardware store on Dillon St. Park the car in the marked area and Roman will get out, and hands you a cellphone. He's expecting some Albanian loan sharks to show up looking for him, and wants you to call when they appear.

Roman will phone you after a few minutes of your lookout duty, and a few minutes more after that the Albanians will appear. Pull up your cellphone and call Roman; he'll run out of the hardware store's back door and jump into the car beside you.

From here, you've got to lose the loan sharks; take a few corners and they should be taken care of. Once they're off your tail, drive Roman back to the cab depot to complete the mission.

Get in Roman's Cab, and drive to to the subway station where Mallorie and Michelle are waiting. Take the girls to Michelle's house in Rotterdam Hill.

Once you've dropped them off, Niko will call Roman and talk about the experience; Roman will direct you to a clothing store near his apartment. Go there and buy a new outfit - this first time is free - and you'll get Michelle's phone number, which unlocks the dating sub-game.

Michelle will probably call you for a date right away, but while you are on your way to her place, Roman will call you for help. (See the next mission.) You should go rescue Roman. When you are done, you may get a call or text from Michelle about your standing her up, but if you call her back, you'll get an answering machine. Subsequent dates are optional, but this first one is required, so head over to her place and complete the date.

Roman is still in debt to the Albanians, and they have trapped him on the basketball court in Firefly Island. After you get a phone call from Roman, head to the basketball courts where you find Roman being approached by the loan sharks, Bledar and Kalem. Bledar approaches you first. As he gets closer, an on-screen tutorial demonstrates the melee combat controls. It's quite easy to take him out using the various buttons. After you knock him out, take down Kalem, who isn't much harder.

After you have finished off Kalem, a third loan shark, Dardan, approaches. He realizes the situation and dashes off before you get a chance to fight him too, so hop into Roman's taxi and chase after him. If you lose him, you fail the mission. After a short chase, he pulls up in front of the Twichins Sugar factory in BOABO and runs up a side staircase. More on-screen instructions teach you how to disarm a player. Finish him off and then drive Roman back up the hill to his garage to complete the mission.

Roman is still in debt to Vlad, but now he wants you to go and pick up one of his regular customers, Jermaine. Head to Rotterdam Hill and pickup Jermaine, who wants to be taken to Masterson Street. Drive him there, and pull into the marker in the parking lot just off the main road. Jermaine goes to pick up some stolen parts from his lockup, when a swarm of police cars surround the area.

Here you will be shown a tutorial on wanted levels. After that, escape the area before the police close in on you. As soon as you escape the flashing area on the map, pull over and avoid police attention. When the wanted level disappears, take Jermaine to Gibson Street to complete the mission. You are shown a quick introduction to the use of Pay 'n' Spray.

When you need to escape the police, a good strategy is to bring up the map and look for a road where you can go fast and straight, then put a waypoint there and the GPS will guide you as you make your getaway. Your goal is to get outside the circle shown on your GPS as the area the police are looking in. As soon as you get out of the circle, stop and wait a few seconds to lose your wanted status.

Another tip is that when you are trying to get away, watch for the red dots on the GPS indicating police cars and make turns to avoid them, when possible.

Shortly after you finish this mission, you receive a call from Vlad, who has work for you. A "V" mission icon now appears on your game map.

Roman wants Niko to pickup one of his friends, Little Jacob, from Oneida Avenue in South Slopes. Head to blue blip and sound your horn. He hops into your car and asks you to take him to Dillon Street in Schottler. On the way, Little Jacob gives Niko a gun and asks him to provide backup in case anything goes wrong. When you arrive, go to the vantage point and take aim.

When the first group of people arrive, take aim and take them out as they approach Little Jacob. After they fall, another attacker shows up from a doorway up on the left. Take him out too. After you pop him, take Little Jacob back to the cafe to complete the mission.

After this mission, Little Jacob gives you a call. He needs some work done and asks you to drop by his place on Dillon Street sometime. This places the "LJ" icon on the game map.

Roman's missions end here until you have completed Ivan the Not So Terrible for Vlad.

At Roman's Taxi Depot, Roman is heartbroken, having found out that Mallorie has been having an affair with Vlad. Niko decides to do something about it. Head with Roman to Comrades Bar where Niko confronts Vlad. Vlad escapes and leaves a host of Russian thugs to try and stop you following him. Push through the thugs, head out through the front door and hop in a vehicle. Keep chasing him until he crashes his car and continues on foot.

Follow the blip to find him and trigger a cutscene where Niko and Vlad exchange some final remarks. You will be prompted on-screen about performing cinematic executions with a pistol. After killing him, a cut-scene triggers where you can see Roman's reaction.

The completion of this mission opens up a new mission strand for the Russian boss Mikhael Faustin. You shortly receive a call from shaken Roman outside the Perestroika club near Outlook Park. Roman's missions do not continue until you have completed Final Destination.

At the cab depot, Roman introduces Niko to a new friend, Brucie Kibbutz. Roman tells Niko that he must get online and tells you to visit the local internet cafe. Follow the blip on the map and enter the internet cafe. The assistant at the front desk tells you that you're already set up.

Use any computer and follow the on-screen instructions to check your email. You will have an email from the "EyeFind Mail Team". To complete the objective, click the Positive Reply button on the email. After doing this, leave the internet cafe and Niko will call Roman to report back. This completes the mission.

There are no more missions for Roman until you complete Russian Revolution.

You receive a phone call from Roman who is hiding in an alleyway in East Island City. This starts the mission automatically. Drive to where Roman is hiding to trigger a cut-scene where Roman suggests that they go back to his apartment where he has something important to show Niko. Drive back to the apartment to find a surprising and tragic sight.

Roman is upset, and asks you to drive him around the corner to his offices. However, when you arrive, you find that Roman's taxi business has suffered the same fate as his apartment. A distraught Roman calls Mallorie who offers him a place in Bohan where him and Niko can lay low for a while. Drive to South Bohan and pull up outside your new safe house to trigger a cut-scene between Roman, Niko and Mallorie.

This mission draws to a close the Roman mission strand, however Roman is featured in many more missions throughout the game. A new "M" icon now appears on the map in Bohan, which starts the Manny Escuela mission strand.