Whomp's Fortress is the second course. One star is required to access it. 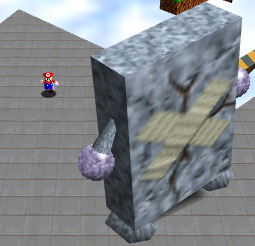 Start by jumping onto the stone wall. You can do this by backflipping onto it from the grassy ledge, or jumping onto it from the tree. Follow the arrows up and turn left. Get past the Piranha Plant either by jumping over it or by crawling past it. Go across the gray bridge quickly, because it will fall apart behind you. Cross the wooden bridge and wait for the rotating bridge to come to the ledge you're on. Go to the middle, and wait for it to rotate to the other ledge. Run onto the ledge, then continue past the Whomp. Go to the right and go past the second Whomp, and jump on the rotating elevator. Jump off onto the top of the mountain and go to the giant Whomp (Whomp King in the DS remake). To defeat it, you need to go in front of it to make it fall, but run out from under it just as it's about to crush Mario. Jump on its back and do a ground pound (jump and push

before you land). You will need to do this three times before the Whomp will give you a star. If you start your ground pound just before the giant Whomp falls, it will pass through you without harm, allowing you to land on its back easily.

Star 2: To The Top Of The Fortress[edit]

Again, travel to the top of the mountain, but this time you'll find a tower. Climb it using the moving blocks, watching out for Bullet Bills that come out of the cannons. The star is at the top of the tower.

Star 3: Shoot Into The Wild Blue[edit]

Instead of climbing up the fortress, you will need to reach a cannon. Start by going up where you would normally go, but backflip left to reach a section with water. Go left and speak to the pink Bob-omb and get him to prepare the cannons for you. Having done that, all you need to do is shoot yourself onto the platform to the left - the one under the flag pole. Aim above the platform above the star. Once you get there (it may take a few tries if you're not used to the cannon), climb down the pole and the star's right there. You can also side flip and wall jump to the platform. 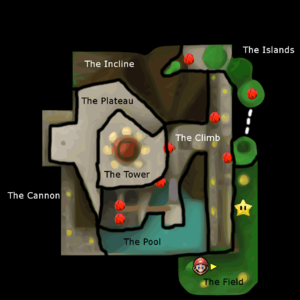 A map of Whomp's Fortress, with all the red coin locations marked out.
Super Mario 64 DS
In the Nintendo DS version, the level is laid out slightly differently. The coin in The Pool has been moved to The Plains. See the next image for details. 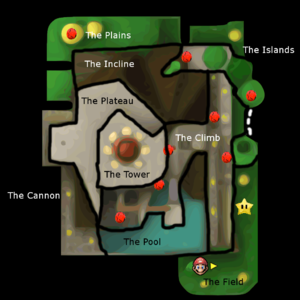 A map of Whomp's Fortress, with all the red coin locations marked out, in the Nintendo DS version of the game.

The Star appears in The Field near where you started. If you have enough health, you may be able to survive a well positioned fall to the star. If not, just walk back down the mountain and take it.

Star 5: Fall Onto The Caged Island[edit]

From where you start, turn around and climb the tree near the start of the level. Once you do so, an owl will come out and offer you a ride. Jump into his claws and turn toward the floating island that you will see with a cage and a star on it. Steer him towards the cage that holds the star up there in the sky. Let go of the owl when you are directly overhead of the island. Walk into the cage through the opening and take the star. This may take a few tries to position yourself correctly.

You can also hop into the cannon and launch yourself into the top of the cage. This also takes a few tries to perfect.

Star 6: Blast Away The Wall[edit] 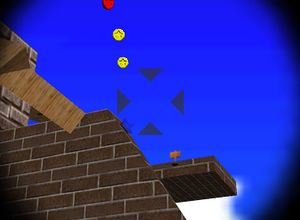 Shoot out the corner wall hiding this star.

Go to the cannon again, but this time aim to the right. You want to hit the side of the brown wall near the top. If you get this right, it will shatter revealing a star (see screenshot to right). Climb up to the wall, slide down to the star, and you've got it. (You can also fire yourself from the cannon right at the star: aim right above it).

Go around the base of the fortress, past the Piranha Plant and a couple of Goombas and hop the fence. Don't worry, there's ground there so you won't die. As you kill that Goomba, notice that there are empty columns in the wall above the stones that pop out and knock you down. Go to the second space and hop onto the orange block and do a spiffy ground-pound. You'll uncover a yellow star-shaped switch with a white ! on top. After the cut scene, showing you where the star is, step onto the switch.

Be ready to run around the base, avoiding the Piranha Plants and Goombas as well as the Bullet Bills and watch out for empty spaces in the ground. You should end up where a star is, surrounded by a glass outer coating that doesn't matter.

Congratulations! You've just gotten a star! That deserves a Klondike (all copyright goes to the people who manufacture Klondike bars)!

Super Mario 64 DS
In the Nintendo DS version of the game, there are no crates, but near the start of the level there are two wooden posts. Like in Bob-omb Battlefield, run around these for 5 coins each. This also means you finish sooner.

Again, getting 100 coins is worth a star. Here is a rather simple route.

The following is a list of where to find all four green mushrooms in Whomp's Fortress..