Caves on the way north[edit] 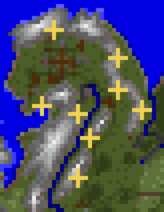 Location of the entrances into the caves in Minoc area.

Five small caves can be explored on the road to Minoc. The first two are on the west side of the road going north. Right after the second one, pay attention for a path leaving the main road and going south then east. The path passes in front of a hut (the owner can be met after sunset), then turns north towards Minoc moongate. The latter three caves are in the mountains west of the northwards path.

Bug alert!
Occasionally, when you enter the sawmill, all the crime scene suddenly disappears. It happens more often if you went west of Britain (e.g. to get the flying carpet) before coming to Minoc. The serpentine dagger will disappear, too, but more can be found elsewhere. According to the plot, you are supposed to go west of Britain only after you had your fortune told by Margareta in Minoc.

Head to the sawmill over the western bridge to find yet another murder. This time it is two Fellowship-hating gypsies Frederico and Tania. Interrogate the onlookers and grab the serpentine dagger. Did you see that candlestick? Talk to Xanthia about it and then to Elynor. Even if it is one of the most populous towns in Britannia, everyone here knows something. The bartender Rutherford also knows about Hook.

From Elynor you will learn that Elizabeth and Abraham have headed all the way back to Paws and to the shelter there. If you've died during your quest you'll have already visited it: it is the place where you come to.

Remember the scroll Chuckles gave you as a reward for knowing The Game? Talk to Margareta and get her to tell your fortune. You will need to go to Yew to fulfill this part of your destiny. However, this guide will continue to follow Elizabeth and Abraham.

You can also add Julia to your party while you are here.

Ask people about Owen, especially Jakher the trainer. You will find out about Karl who lives to the south. Follow the main road and pay attention for a path that branches to the south. Follow it south and east until you reach a hut (46N 89E), where Karl rests at night. Talk to him and you will eventually get the ship plans. Show them to Julia who realises the ship is flawed. Now go to the mayor Burnside, who immediately cancels Owen's monument. If you talk to Owen after doing this he will kill himself and you will earn 100 experience points. It is possible to resurrect him, but he will only suicide over and over again.

Head to the Britannian Mining Company headquarters. Search the drawer for a key to a chest with 9 Silver Serpent Venom. Sell this to Kessler, the apothecary in Britain (50 GC/vial, for 450 GC total).

There is a trashcan in the west wing of this building with some goodies. Dig through the garbage until you find a bag, and look in it to find some gold coins and a gold ingot. The rabbit has swallowed 35 starbursts (throwing weapon), so take those if you wish.

Gregor is a member of the Fellowship, while the other three openly oppose it.

Exult bug
Beware, Exult sometimes counts dungeon loot as stolen, so be sure to give it to someone other than the Avatar.

Location of the entrances into the caves in Minoc area.

From the sawmill, head south to the mine. Here you'll find even more venom, so be sure to pocket it.

There is also an infinite supply of Blackrock chunks, if you can find the hidden machine that is. Remember: these are lighter than powder kegs but have the same effect. The secret passage is at the end of a long tunnel that goes south then split east and west; just run into the south wall.

The 16 vials of venom are worth 800 GC when you sell them to Kessler of Britain.

The Minoc Mine and the Dungeon Covetous are separated by a magically locked door. Ignore it and save your reagents, because you can enter Covetous from the beach south of Minoc.

North of Minoc (90N 61E) is another mine. Two rooms with campfire occasionally spawn cyclops or trolls. You can find many torches, some gold nuggets, and 8 more vials of venom.