Diablo II/Sisters to the Slaughter

After completing the Search for Cain and returning Charsi's Tools of the Trade from the Barracks of the Monastery, you can talk to Deckard Cain to activate the sixth, final and thus far only mandatory quest of the first Act.

If you talk to anyone before leaving the camp:

At this stage you should have made it at least as far as the Barracks inside the Monastery, where you'll find the stairs down to the first level of the Jail. You now need to travel through the three levels of the Jail to the Inner Cloister outside the Cathedral, within which you'll find the entrance to the Catacombs.

The first level is randomly populated by three of the following five monster types: Bone Archers, fiery Bone Mages, Dark Ones, Death Clan Goatmen and Wraiths. You may also find Gargoyle Traps, and non-random Champion and Unique monsters in addition to those randomly generated.

The second level is similarly populated to the first. If you continue traveling left after entry then you're likely to encounter Pitspawn Fouldog before you find the stairs down to the third level; if you wish to avoid this then travel right after entry.

Pitspawn Fouldog can be found in a cul-de-sac. Like Griswold, it can curse you with Amplify Damage, and the damaging lightning balls it and its minions spit can also slow you with cold. This can be a difficult and dangerous fight, particularly in Normal, even if you Cannot be Frozen, and before it explodes in a cold nova upon death.

The third and final level is similarly populated to the previous two, except electric Bone Mages replace fiery ones. You're most likely to find the most direct route to the stairs up to the Inner Cloister by traveling left after entry.

The stairs up from the third level of the Jail are in the north corner of the Inner Cloister. It always has the same layout, with a waypoint in the middle of the cloister through the doors to the south. Although it's supposed to be populated by Black Archers, electric Bone Mages and Dark Ones, it's so small that you might not see all or many of them.

The doors to the Cathedral are in the middle of the cloister's northeast wall.

Like the Inner Cloister, the Cathedral always has the same layout as well. The altar is to the northeast, at the junction of its cross-like structure, with long galleries to either side of its body and a small room to the left of its head; the stairs down to the Catacombs Level 1 are in the northeast wall of its right arm, so the most direct route is through the gallery to the right of the entrance and the door at its northeastern end to the right arm, which allows you to avoid Bone Ash if you wish.

Otherwise, the Cathedral is populated by Dark Shamans and Dark Ones, Tainted and Wraiths.

Bone Ash stands before the altar at the heart of the cathedral. Due to its Unique bonuses it's Immune to Cold, even in Normal, and its poison bolts can slow with cold. Otherwise, it isn't particularly dangerous.

If you haven't already activated this quest by talking to Deckard Cain, then entering the Catacombs does so:

If you return to camp to talk to anyone before completing this quest:

The first level is populated by Dark Shamans and Dark Ones, Rat Man and Tainted. You may also find Gargoyle Traps, and non-random Champion and Unique monsters in addition to those randomly generated.

The second level is similarly populated to the previous, except Arachs (Giant Spiders) replace Rat Men. You're most likely to find the most direct route to the stairs down to the third level by traveling left after entry, and continue doing so for the most direct route to the final waypoint in the Act. Create a Town Portal at the stairs so that once you've found this waypoint you can return from camp; if you find the waypoint first then travel right, to the stairs.

The third level is populated by Afflicted, Banished (Vampires) and Ghouls. You may also find Gargoyle Traps, and non-random Champion and Unique monsters in addition to those randomly generated.

The fourth and final level of the Catacombs is much smaller than the previous three, and always has the same layout: the stairs down from the third level are in the northeast wall of a room on its right side, and through the closed door in the middle of its northwest wall is the reception area for the throne room, which is beyond the closed doors in the northeast wall. In the middle of the reception area is a sunken pit, filled with blood and corpses.

The level is randomly populated by Afflicted and Ghouls, with four Dark Shamans and their Dark Ones in the reception area (one in the east corner, the others along the northwest side), and another three in the throne room itself (one in its right arm at its southwestern end, another just north of its junction and the last at the northeast end of its body).

It's advisable to kill everything in the level up to the junction of the throne room (including the Dark Shaman and its Dark Ones just to its north, if possible) before advancing into its body to confront Andariel herself. It may also be advisable to create a Town Portal somewhere outside the throne room (possibly even back up the stairs in the third level), and make sure you have plenty of healing and mana potions: if your poison resistance isn't particularly high, you should also drink multiple Antidote Potions before the confrontation. 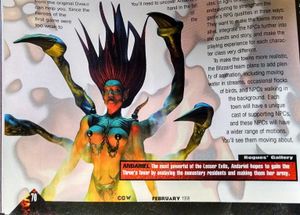 Andariel promotional art. "The most powerful of the Lesser Evils, Andariel hopes to gain the Three's favor by enslaving the monastery residents and making them her army."

Andariel is a melee attacker who can also shoot poison bolts and a poison spray, both of which also inflict physical damage (so they can be blocked with a shield). She also inflicts 200% damage on any mercenary, which may not survive unless you or your pets bear the brunt of her fury (although she inflicts 400% damage on pets). If you're having trouble going toe-to-toe with her, retreat to the reception area and try using ranged attacks and skills while she chases you around the sunken pit in its midst.

Sometimes, just sometimes, it's actually useful to talk to the people in camp, and if you do so with Deckard Cain you'll learn that Andariel isn't fond of fire. She has Fire Resist -50% in all difficulties, which means fire damage of any kind is normally increased by 50% against her: if your class doesn't have any Fire Skills then there are items which add fire damage to attacks (if nothing else in Normal, you can place the highest quality Rubies you have in a weapon with sockets). Unfortunately, the fires dotted around the level only damage you, not her.

When you finally kill her, the screen shakes as she erupts in a pillar of fire with fingers of flame snaking across the floor as rubble falls from the ceiling, lethal to any nearby monsters but harmless to you and your party. She always drops two chipped gems and one of normal quality in all difficulties, and a portal back to camp opens.

If you talk to anyone but Warriv upon your return:

You can now go east with him, to Lut Gholein.