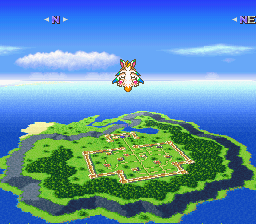 Climb to the top of Lofty Mountains once again, only to find out that Sage Joch has not returned. This time, Jehk explains that he has gone to the Gold Isle which is Northeast of your location. Step outside and summon Flammie. Once airborne, hold

to get more altitude, point yourself in the Northeast direction (aim slightly more to the North or you might miss your destination), and fly ahead. You should come to a sizable island containing a fortified city. Descend when your above it to enter the Gold City. 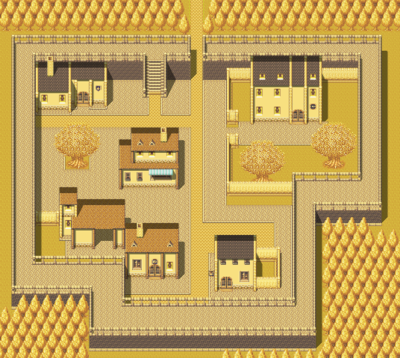 You will arrive in the Empire City of Gold, where everything, from the streets to the trees, is made of or covered in gold. One man points out that the island is sinking under the weight of all the gold. The citizen of the town vary between loving the place and wanting to leave to a resort up north.

In the upper left corner of town you'll find an item shop, where you can buy incredibly expensive and incredibly useful defensive equipment. If you can afford it, buy three Lazuri Rings, three Battle Suits, and two Duck Helms. Since the Boy can't wear the Duck Helm, pick him up a Dragon Helm. This will probably drain your savings, but if you manage to buy everything in that list, you will likely more than double your protection levels. Remember to sell back whatever you don't need.

Watts will set up shop in the lower left corner of town. The upper right corner of town has an Inn. It is also home to King Manmon, who lives on the highest floor. You can climb to the top to speak with him, but you won't learn anything useful. To the right of the item shop is a staircase to the upper level of the fortified wall around town. If you follow it all the way around, you'll find a guy near the end who mentions that the key to the Light Palace was stolen by a Tasnican spy, who was caught in Southtown.

The only other place to visit is the Golden Tower above town. But as the guard outside explains, it is locked for all visitors. Based on what the man on the wall had to say, it's probably a good idea to head to Southtown and search for the key.

Summon Flammie and from Gold City, fly due East until you see what looks like a small establishment nestled into the woods, besides a small round elevation. That happens to be Southtown. (Northtown is gigantic from the air compared to Southtown.) Once you arrive, head to Mara's house in the upper left corner of town. She'll explain that the spy who was caught stealing the key was her husband. She has the key and wishes she could exchange it for her husband, but knowing that's not possibility, she passes the key on to you. Summon Flammie again, and return West to Gold City. 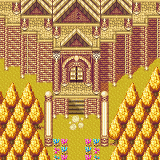 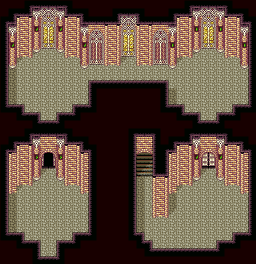 Floorplan for the 1st and 3rd floors

Once you land in Gold City, run straight up past the guard, up the steps, and right through the door to the tower. In the first room, you'll be greeted by two Beast Zombies. There's a treasure chest in the room which contains a Spear's Orb. A Dark Ninja may appear after you open the chest. Head through the door in the back to continue through the room, and head to the right. You'll encounter a Wizard Eye that spawns Weepy Eyes. A Beast Zombie guards the path to the lower left corner of the room, and another can be found on the other side of the door. Head over to the stairwell in the center and climb to the next floor. 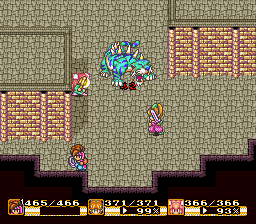 Perhaps unexpectedly, you'll be thrown into a boss fight when you reach the second floor. It is against a great beast known as Blue Spike, and he resembles a blue tiger. He can cast a variety of fire magic, and he has the ability to ball up and strike members of your party. He can also bite and chew on any party members that get too close to his mouth. He can leap up in the air and land on one of the high ledges in an effort to escape from harm, although he is still quite vulnerable to attack when he's up there. He is not weak to any particular magic, so cast whatever you can on him to immobilize him as much as possible, while other party members attack and the Girl heals damage.

Once you defeat him, you'll earn the Boomerang's Orb. The room will reset and a stairwell to the next floor will appear. Climb up to the third floor, where you'll find another treasure chest, this time containing an Axe's Orb. Once defeated, Blue Spike will never reappear, so if you wanted to exit the tower and visit an Inn to restore any lost magic points, you don't need to worry about having to fight him again. You can even visit Watts to upgrade the weapons for which you found orbs.

When you're ready, pass through the doors on the third floor. You'll encounter a Beast Zombie and a Dark Ninja on the other side. A Beast Zombie will be waiting on the right side. Below the door to the lower right corner, you'll find an Emberman. Take it out quickly before it has a chance to multiply too much. Then head up the stairs in the center. 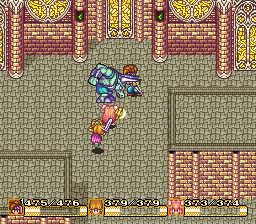 On the fourth floor, you are pitted against a second boss. This time, the Gorgon Bull resembles a gray Minotaur who has the ability to petrify members of your party. Petrified members are frozen as statues until the effects wear off. He also likes to impale you with his horns and toss you aside. He can knock members unconscious as well. Gorgon Bull happens to be weak against Sylphid magic, so have the Sprite cast as much of it as frequently as possible, to remove the Gorgon Bull quickly.

Upon defeating the Gorgon Bull, you'll receive a Bow's Orb. Then the staircase to the fifth floor will appear. You've made it to the very top of the tower, where the Spirit of Light, Lumina, resides. Lumina explains that the king was forcing her to use mana to make gold. Then she giver her powers to you. As only the Sprite is able to cast Shade's magic, only the girl can cast Lumina's magic. Lumina's magic is fairly expensive, and therefore harder to level up quickly. Climb the steps to seal the sixth mana seed, and gain access to the sixth level of magic proficiency. Visit Watts in order to upgrade any weapons. By now, every single weapon except the sword should be upgraded to level 6. Then summon Flammie and make your way back to the Lofty Mountains.