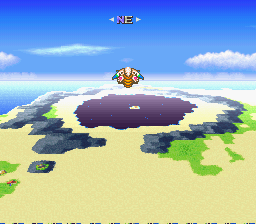 This time when you climb to the top of Lofty Mountains once again, you will be told that Sage Joch has travelled to the Moon Palace, floating in the Sea of Wonders in Kakkara Desert. Step back outside and summon Flammie. Have him take you to the desert. The Sea of Wonders is the large black area in the Northeast corner. Only Flammie can get you there, and if you leave the entrance to return to the desert, it's a one-way trip. To make sure Flammie drops you off in the right spot, start by descending over the black area, and travel back to the desert while you descend.

There are many stars in the sand, and a lot of Mad Mallards patrolling about. Follow that path that leads up through the top, and eventually over to a ship. This turns out to be Karon's ferry, which takes you up to the Moon Palace. Karon warns you not to get lost in the palace, as it contains a lot of nothing. When you arrive Karon says he'll wait for you. Step off and head up, and you'll be at the palace entrance. 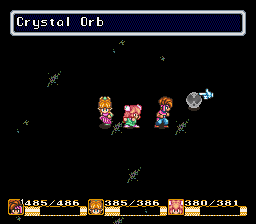 You'll first encounter a floating blue creature known as a Marmablue. It and two more guard the entrance to the palaceabove. They have the power to absorb magic. Step inside, and you will be in a sea of stary darkness. Another Marmablue will greet you inside. You arrive through the arrangement of purple flames.

If you choose to run up through the area, you will run continuously until you happen to wind up beneath the purple flames you arrived from. Everywhere you run, you will just encounter more nothing. Vary the path you take through the room until you stumble upon an orb. Cast Sylphid's Analyzer on it, and you will discover that Lumina's magic will work. Have the girl cast Lucent Beam on the Crystal Orb, and the lights will turn on, placing you just one room below the Mana seed altar.

Run up into the next room, and the moon spirit Luna will greet you. Luna will grant you her powers. Then climb up the steps, and seal the mana seed with your weapons. This will grant you the power to use level 7 magic, should you choose to increase your magic power to such level. When you're done run downward until you exit the palace and return to Karon's ferry. Allow it to take you back and return to the screen below. Then summon Flammie and return to the Lofty Mountains. 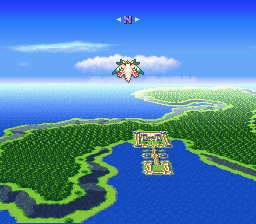 Another trip up the mountain will only earn you the information that Sage Joch has decided to visit Tasnica, which you can find by travelling to the West. Step outside and summon Flammie, and ride off in that direction, but don't fly too far. Tasnica is on a large island nestled along the continent which contains the Lofty Mountains. Flammie will only be able to drop you off on the square outcropping south of the citadel.

Hop off and head up through the palace entrance. It just so happens that you'll run into Jema. He will tell you to be on the lookout for an Imperial spy who is trying to kill the king, and then he'll walk away, leaving you free to roam the castle. Finding the spy is literally all that every guard will talk about. 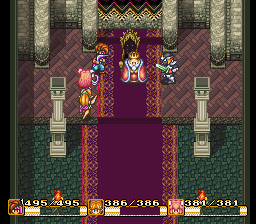 If you explore the path to the right, it will eventually lead you to the throne room. When you encounter the king, he won't recognize you and assumes that you're the spies. He will order to have you arrested, but Jema will appear, and a guard will recognize that he's not the king. The imposter will remove everyone from the room but you and him. Then he will reveal himself to be a Dark Stalker while the king stands frozen. Attack and defeat the Dark Stalker, and then wake up the king.

Speak to the king again. As a reward for saving him, he will grant you a Sword's Orb. Speak with Jema, and he will tell you that you still need to learn true courage. He leaves to go fight the Empire, and encourages you to find Sage Joch. Before you leave the castle, have a look around and talk to people. Some of them will fill you in on pieces of Jema's past, and his friend, the hero of Tasnica named Serin.

Then when you're ready, step back outside and summon Flammie. Have him return you to the Lofty Mountains for another shot at finding Sage Joch.

Climb to the top of Lofty Mountain yet again. This time, Jehk will announce that the sage will see you. You can speak to him, but Jehk must translate. He offers you a challenge to find courage which you must accept. If you do, the spikes to a path behind the cave will open up. Step inside.

You begin in the lower left corner of the map above. Your goal is to make it over to the exit in the upper right corner. Apart from a few dead-ends, the path is fairly linear. Along the way, you'll need to use the ax to chop down all of the stalagmites that get in your way. You'll also need the whip once to get over a gap.

Throughout the cave, you'll encounter very high level monsters who aren't exactly dangerous, but can be particularly hard to kill. If you're not especially high level, you may opt to simply run past them, as the experience points they offer at this point don't necessarily warrant the effort it takes to kill them. If you do plan on killing them and you find that your basic attacks are doing any good, be sure to set the strategy of each of the computer controller players to charge their weapons up to level 2 or 3 before attacking.

You'll encounter Nitro Pumpkins, Marmablues, and Shape Shifters. Nitro Pumpkins can be especially difficult to deal with. if you are not especially high level, basic attacks will bounce off of them. You'll need to charge up your attacks in order to hurt them. They also like to cast Wall which will reflect all magic attacks back at you, as well as Burst to do damage to whoever is close to them. You've encountered Marmablues before in the Moon Palace. Shape Shifters are a bit like Drops, they look like slimes that multiply. Except that as they multiply, they sometimes turn into different types of enemies in the process, such as Captain Ducks, Eggplant Men, Beast Zombies, and Needlions.

Continue making your way through the cave until you reach the exit in the back. Step through and you'll arrive in a small room. 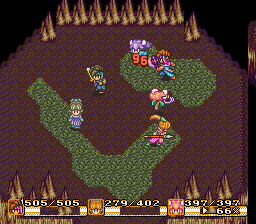 For the final challenge of this cave, you must find the courage to face your toughest enemy: yourselves. Shadow versions of the Boy wielding the Mana Sword, the Girl using her martial arts skills, and the Sprite tossing a boomerang, will appear before you. The battle will begin immediately. Your challenge is to defeat each one of them. You don't have to defeat them in any particular order, but it is recommended that you try to focus on just one at a time in order to remove each one of them quicker. They will have high levels of defense, and they're not very susceptible to attack magic. On the other hand, if you have all of the best defensive equipment purchased from Gold City, then they aren't too likely to make a dent on you either. The best bet against these three is using charged attacks. The shadows have approximately the same amount of health as you, so with charged attacks, you should need to hit them more than a few times. Once each one takes enough damage, they nod in approval before leaving the fight. Once all three are defeated, head back out through the bottom.

When you exit the room, you will return immediately to Jehk's room. Jehk congratulates you, and admits that he is actually Sage Joch. He claims that he didn't help you before because you weren't ready, but now he believes you are. He directs you to find the Tree Palace next. Step outside and summon Flammie.