To reach the Upper Lands, you must visit the Cannon Bros. location which is east of the Water Palace, north of Pandora, and just below the starting town of Potos. Choose to head to the Upper Lands, and hop in the cannon. You will be send soaring through the sky, quite far away from your home, and come crashing down in the middle of some woods known as the Great Forest.

You'll find yourself among a large group of creatures known as Moogles. If you try to talk to one of them, the Sprite will explain that some Pebblers have taken over their home. If you explore near the top, you'll actually find Watts here as well. If you have any orbs that you haven't applied to your weapons, he'll be happy to do so here... for the usual fee of course.

To help the Moogles, you'll need to explore the Great Forest a little bit. You'll find that it loops around in a circle, and each quarter of the circle represents a different season. Going counter-clockwise, you start in Winter, followed by Spring, then Summer, and then Autumn, and back to Winter. Each season has their own set of enemy inhabitants. Note that to the south east of Summer is a Cannon Bros. Travel center that can send you back to Potos or Gaia's Navel. To the south west of Spring, you'll find an area that you can't quite access yet. 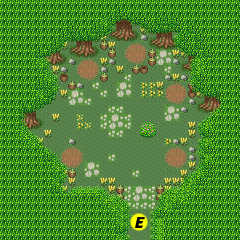 You may also notice, as you travel through the Great Forest, that you'll see a creature fly across the screen. There's nothing you can do to interact with it at this time. When you reach Summer, explore the upper left corner of the map. You'll notice a path that leads up. Follow it, and you'll wind up in a section occupied by three Pebblers. Fight them and remove them from the area. If you clear them out, the Moogles will return to their village when you attempt to leave. Speak to any of the Moogles, and the Sprite will suddenly get some of its memory back. It will remember that if you travel from Spring to Winter, and then to Spring again, you can enter something.

Watts will also accompany the Moogles and set up shop here in case you need him. Good thing too, because you can find two treasure chests here, one of which contains a Glove orb and the other contains an Axe orb. The sales-cat Neko has also set up shop here. The only new piece of equipment he can offer is the Quill Cap, a more defensive headgear for the Girl and the Sprite than what you currently have equipped. Be sure to buy two before you leave. Neko can also save your game. 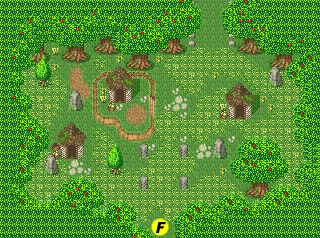 Follow the instructions by leave the village, heading west to access Spring, and then walk in a counter-clockwise direction through Summer, Autumn, Winter, and back to Spring. When you do, you'll hear a sound which the game indicates came from the right. Head to the right, and a new path will be available heading up. When you do, the Sprite will race in, only to discover that his village is in ruins. Then you'll hear a noise. Head up through the top of the village to find out what it is. 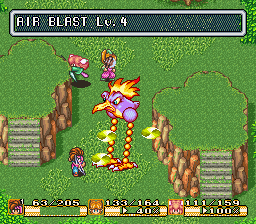 When you arrive, you'll be greeted by an angry bird who hops around on two thin legs. This bird attacks by pouncing on opponents, as well as by casting powerful Air elemental magic, like Silence, Thunderbolt, and Air Blast. There's little that you can do to avoid the magic spells, so make sure the Girl is ready to fire off heal spells whenever necessary. In order to attack the bird, you'll have to strike it in the head. The game is a little counter-intuitive in that you can strike the head by standing above it, rather than where it's feet are. It will occassionally leap into the air and land on the two rocks in the middle of the battlefield, rendering it invulnerable. Use the Sprite's magic to attack it with Freeze or Gem Missiles. Keep your party alive, and back the head of the bird until it is defeated. At that time, you will obtain a Boomerang orb.

Walk up through the top, and you'll discover a building. Step inside, and you'll discover that it's one of the palaces. An old man will be near the top. It turns out to be the Sprite's grandpa. He explains that the Empire undid the Wind seal. And humans are releasing more monsters by breaking the seals. He grants you access to Sylphid, the Wind elemental. He teaches you to use Analyzer on Crystal Orbs to find out what magic works on them. It's also very good for finding the weakness of enemies. He suggests that you make your way to Matango to find a white dragon who can help you. He'll heal you and offer to save your game. Before you leave, don't forget to touch the seed with your sword to seal it and receive its power.

Exit back out through the abandoned village and back to Spring. Head down to the lower left corner and exit through the path to enter the Upper Land. As grandpa suggested, find the crystal orb near the bottom and cast the Girl's spell Analyzer on it. Air magic works on it, so have the Sprite cast Air Blast on the crystal, and sure enough, a path will open.

The Upper Lands is a sprawling forest that is spread out across three large maps. You begin on the far right side, and work your way to the Other than the frequent encounters with Silktails and Crawlers, there isn't a lot that's very remarkable about it. From the first map, you must find an exit to the west. In the next section, Steamed Crabs, Water Thugs, and Nemesis Owls will join the fight. Your goal here is to find the next exit in the upper left corner. In the final section, simply head to the top to find an entrance to a cave. On the far right side of the third map, you'll also find a path that leads to a Cannon Travel center, but they are currently shut down, so you can't utilize them here yet. Don't shy away from too many fights, as this area is an excellent place to gain experience points and master more weapon levels.

Inside the cave, you'll encounter a Kimono Bird. Kimono Birds' favorite tactic is to summon Pebblers. Try to focus on the Kimono Bird as much as possible, saving the Pebblers for later, as the bird will simply replace any Pebbler you defeat early on. Once you make it through, you will arrive in Matango.