Secret of Mana/Water Palace and Pandora

Traveling to the Water Palace[edit] 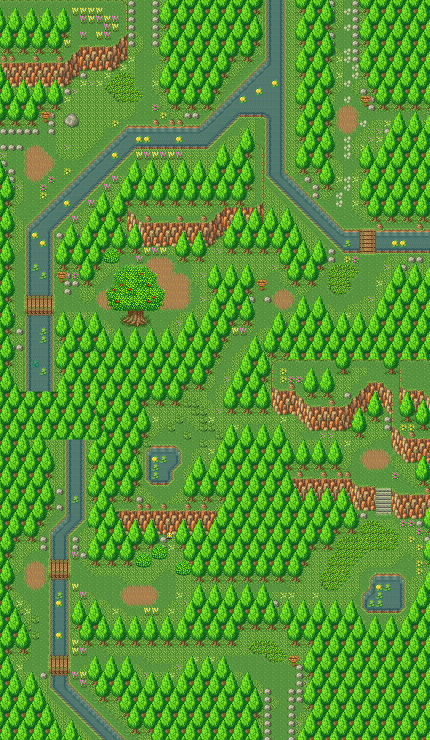 Exiled from Potos, you have no choice but to head south. You first appear near the upper right corner of the map shown to the right. Only a short distance from where you arrive, you'll find a path to the right. This path leads to a Cannon Travel Center. If you head over there, the man will explain that Jema has traveled to the Water Palace, and he's paid for your trip. If you choose to accept it, you will slide in be blasted over to the area just south of the palace. However, it's a good idea to walk there. In doing so, you will encounter new monsters and learn how to fight them, and defeating them will give you much needed experience points and gold.

From the path out of Potos, head south and cross a bridge. Then head to the left. In addition to Rabites, you are likely to encounter pink flowers known as Lullabuds. They're not much more difficult than Rabites, but they have more hit points and can heal damage. You should read a sign post which indicates that the Water Palace is above, while the Kingdom of Pandora is below. Don't head down to Pandora just yet. If you try to visit Pandora now, a guard will prevent you from entering. Continue west on your way to the Water Palace.

As you pass by a large tree, you'll encounter another new enemy, the Mushboom. Mushbooms have even more experience points, as well as an explosive attack. This attack rarely connects for any damage, but keep an eye out for it. Defeat it and continue west until you cross another bridge and can travel north. On your way up, you'll see a path that heads to the west. Explore this path, and you'll discover a house in a little clearing.

Inside the house, you'll find Neko, the cat salesman. He will offer to let you sleep in the Inn, or he can sell you equipment, or even buy some of yours. He doesn't sell any equipment that you need at the moment, but you can save your game here, even if you choose not to sleep in the Inn. Indicate that you want to stay, but don't buy a room if you aren't low on hit points. You will still be asked if you want to save the game.

Outside of Neko's house, head north from the path to enter a new area. 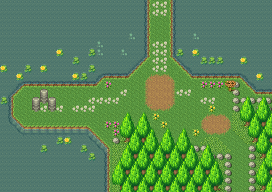 When you arrive in this new section, four soldiers will be standing before a leader. If you speak with the leader, named Dyluck, he will explain that they are from Pandora, on a mission to find the witch known as Elinee. You can speak with the soldiers as well. One will indicate that you need a whip to use the shortcut through the woods. Upon speaking to your third soldier, they will embark for the woods. They head off to the left and disappear, presumably through the teleportation point surrounded by stones. 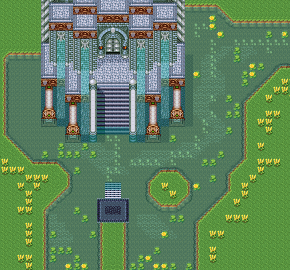 This leaves you free to head north to the palace. Continue along the path, and wade through the water to reach the steps of the palace. You'll find Jema there waiting for you. He won't waste any time and steps right in. Follow after him, and you'll be inside the palace entrance. Jema will head up. Follow behind him and pass through the gates ahead. 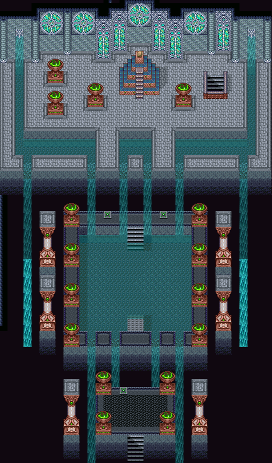 Once inside, you will learn about how switches operate. You will arrive on a platform with a single green switch. Step on it, and a bridge to the area above will appear. This will lead to a shallow pool of water. Continue up, and you come upon two more switches. The left switch won't appear to activate, but stepping on the right switch will cause a bridge to appear and you will automatically advance across it.

You will ask the maiden where Luka is, when Jema will step forward and make it clear that the maiden is Luka. Continue the conversation with Jema, and Luka will explain that the Mana Sword's power is growing weak. Pulling the sword revived the monsters. You must find the orbs which can restore the sword, as well as find someone who can forge swords in order to repair it. Continue the conversation with Luka, and she will explain that the empire seeks the Mana Fortress.

Jema will announce that he is headed to Pandora to see if the Empire is causing any problems. He instructs you to head to Gaia's Navel in order to find a blacksmith among the dwarves that live there. After Jema leaves, continue talking with Luka. She will explain more about the sword to you, and encourage you to be the hero that the world needs. Then she will instruct you to examine the seed. Doing so will cause the sword to seal the seed. Luka will explain that there are eight seeds in eight palaces. Then she will then restore you, let you save your game, and give you a second weapon; a spear. She will also tell you to head to Gaia's Navel and search for the Underground palace.

On the way to Pandora…[edit] 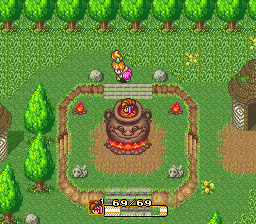 Once you finish talking with Luka, head down to exit the Water Palace and return to the outside. Keep running south until you are back at the clearing where you ran into Dyluck's troops. Return to the path to the south and keep running down past the entrance to Neko's home. Before you reach the bridge to cross the water, a pair of Goblins will ambush you and abduct you.

You have no control in the next scene, as it plays out like a cut scene. You will be captured in a pot that the goblins are using to turn you into their next meal. They will be busy celebrating the occasion, and the two that are guarding you will decide to join in on the dancing. At that moment, a girl will appear. She will see that you're in trouble and rescue you by pulling you out of the pot. Then the two of you will escape.

Once you are back on the path below the Water Palace, the girl will explain that she was looking for someone and thought you might be him. Then she takes off, leaving you alone once more. From here, head east over the bridge, attack the Mushboom, and then start heading south at the sign.

From here, you must follow the path until you reach your destination: the village of Pandora. There are two recommendations for your journey through the woods. First, fight everything. You should take every opportunity to earn experience points and rise in levels as much as possible. If you don't, you will find later sections of the game too difficult to survive. Second, you may wish to switch your weapon to the spear at some point and begin reaching level 1 proficiency with that weapon as well.

Around the time that you reach a clearing with a Mushboom while you're running to the west, you may notice a small yellow creature below a ledge. This creature can serve as a one-way shortcut to the ledge above (which is away from your destination). From this clearing, simply head west, then south, and then back to the east until the path exits to Pandora below. 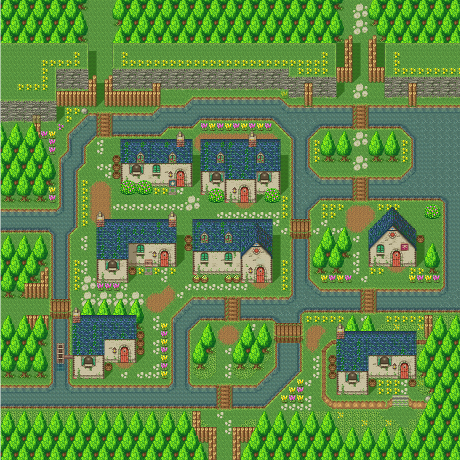 You've made it to Pandora. The guard will let you in, but he recommends not talking to the villagers. It seems they won't have much to say even if you try. The item shop doesn't have a lot of unique items for sale, and the merchant in the armor shop won't speak. Some people are very concerned about the state of the villagers. One mentions that some people have been gathering at the ruins south of the castle.

It's not required, but if you visit Pandora's palace through the upper right corner of the village, you can encounter the girl who saved you from the goblins and recruit her. If you choose not to do this now, you will have another opportunity, but only after the girl winds up capture by two rather powerful Werewolves. The fight against the Werewolves is rather difficult if you don't do a lot of grinding to level your character up. Recruiting the girl now spares you having to do that fight, and it gives you an ally to help you in your effort to reach Gaia's Navel. 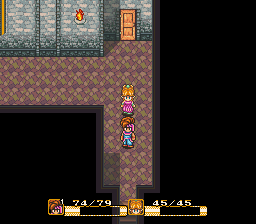 Enter Pandora castle. Head through the large doors, and up through the main corridor to the hallway above. Head left, and follow the path until you reach a set of stairs. Climb the stairs, run right through the upstairs hallway, and down the next set of stairs. On the floor below, immediately climb the stairs to your right. On this next floor, you'll encounter the girl who is fuming about her potential arranged marriage. Determined to find Dyluck, she insists that you join her so you can help find him.

You can explore the rest of the castle. In here, more people will talk about their concern for the state of the villagers, and how a witch seems to be the one who put a curse on the people. If you head to the main audience chamber to see the king, you'll find Jema there. He tells you that he will investigate the ruins, and instructs you once again to visit Gaia's Navel. If you speak to the king, he will explain that he sent Dyluck to fight the witch, but no one has returned. The girl will be furious.

Whenever you're ready, head out and start on the path to Gaia's Navel by taking the west exit out of Pandora. On your way out, it's a good idea to purchase a Hair Ribbon, as it's a good defense boost for the girl.