Before you go flying off to the Mana Fortress, it is important that you return to some town like Mandala, or Matango, to rest at an Inn, save your game, upgrade any weapons, and buy any items you may need. You should make sure you have a full set of four Faerie Walnuts and four Cups of Wishes. Understand that once you engage the third boss of the fortress, there is no turning back and you will either complete the game, or die. Therefore, it's important to have a good strategy for dealing with the fortress.

The Mana fortress contains three boss battles, followed by the final battle of the game. The first two bosses of the fortress can be defeated when your characters' levels are still in the low 60s, but ideally, you should be closer to 70 when you attempt to beat the third. (Level 70 is when the Girl and the Sprite obtain the maximum of 99 magic points.) Additionally, the closer the Girl's Lumina magic is to level 8, the better, as it's extremely difficult to beat the third boss without a powerful Lucent Beam attack.

If you are already above level 70 and have maxed out many of your magic levels, you can try to charge through the fortress in one attempt. However, if that's not the case, you'll want to tackle the fortress in stages.

Just getting to the Mana Fortress can be a bit of a mystery. You'll see it hovering in the air above the planet. But if Flammie travels too fast, he'll sail right past it. Instead, get as high into the air as possible (hold

), and approach the fortress until you are as close to it as possible without it flying behind you. If you do this correctly, and the fortress doesn't move around during the next thunder clap, you'll start to see Flammie rising to the top of the screen, and advance towards the fortress. Then he'll fly through the clouds and drop you off at the bottom of the fortress exterior.

You'll need to fight your way up the exterior, past Captain Ducks, Dark Stalkers, Kimono Wizards, and Fiend Heads. Once you make it to the top, step through the center door to enter the fortress.

Once you step inside, you will now begin a journey through the many compartments of the fortress, a series of small inter-connected rooms that create a labyrinth. While each room is distinct, the entire floor is connected, so enemies can follow you to an from various locations. You'll need two tools throughout your exploration of the fortress: a whip to help you leap over gaps, and a sword or an ax to cut down green crystals which get in your way as you travel. Ideally leave these weapons on two of your characters so that you can quickly switch to them using

instead of having to change weapons through the Ring Commands.

Many rooms aren't initially traversable until you locate the green switches in the room which you must step on in order to extend some part of the floor that allows you to proceed. You only need to do this once, and subsequent visits to the fortress will remember what you did. As stated above, you can't use the Magic Rope or Flammie's Drum to escape the fortress from inside, so it's a good idea to try and remember your way out in order to escape and restore your party and save your game.

Each floor is kind of long, but there aren't too many opportunities to get lost. The quickest path to each floor exit has been identified on the maps, so refer to them if you get lost along the way. The first floor has one trick fork in the road, and the wrong path simply leads you to a dead-end. For the most part, you will travel all the way up, and then all the way back down, before heading to the left where you'll find the floor exit. 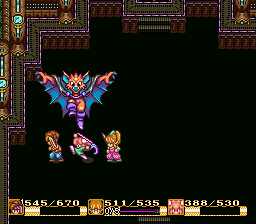 Buffy appears to be (ironically) a large vampire. It will bounce around the room and try to attack you. If it gets withing reach distance of a character, it may pick them up and start chewing on them. His attacks can poison people. He will also try to fly up very high and pounce of people for a good amount of damage. He can cast some spells like Dark Force and Freeze. He's pretty formidable. He does have a weakness, however, to Lumina magic. If you are not planning on fighting Buffy and fight the third boss without leaving the Fortress and staying at an inn first, then have the Girl cast Lucent Beam on him liberally. If you are more concerned with saving the Girl's magic points, the Sprite can cast a variety of elemental magic spells like Freeze, Gem Missile, and Fireball. Try a variety of them out and see which one if most effective, then stick with that. All the other characters will have to try and time hits when Buffy is standing on the ground, which is the minority of the time. 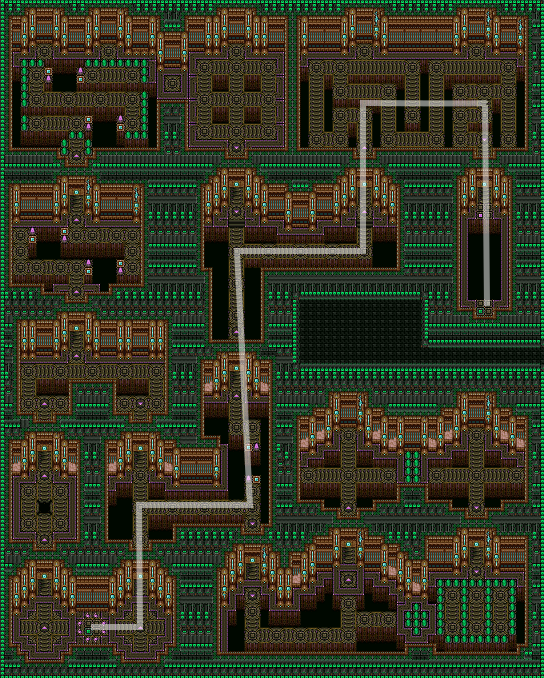 The second floor has the most choices and branching paths out of all the floors. If you wind up heading toward the lower right corner, you will end up in a loop that goes nowhere. The real goal is to make it from the lower left corner to the upper right corner, and then head down from there to find the exit. 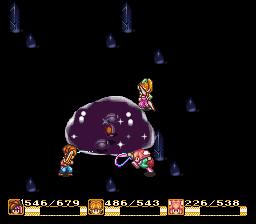 Although it appears to be a simple large slime, it is actually a formidable user of magic. While it has a tendency to cast Acid Storm on you, it will also note the last elemental magic that was cast upon it, and cast that back at you. So if you cast Salamando magic at it, it will start casting fire magic at your party as well. It is weak against Shade magic, so you'll want to have the Sprite cast Dark Force as much as possible. While Dread Slime resembles the Lime Slime boss, it differs in one distinct detail. As the Lime Slime took damage, it got smaller in size. However, as you attack the Dread Slime, it will get larger. So large, in fact, that it will pin your characters up against walls and in corners. There's nothing you can do about it, and as you get pushed further away, the Boy will become next to useless in the fight as he won't be able to perform an attacks that get close to the core of the Slime. Be prepared for this fact, and make sure you have enough Faerie Walnuts to make it through the fight with the Sprite. Alternatively, you can cast MP Absorb against it as well.

A very dirty and effective trick to beating this boss is to cast Wall on all of your characters because this boss has no physical attacks. The Dread Slime will mindlessly spam Acid Storm at you, but Wall will bounce it back at it and lower its defenses. All you have to do is just spam charged attacks. 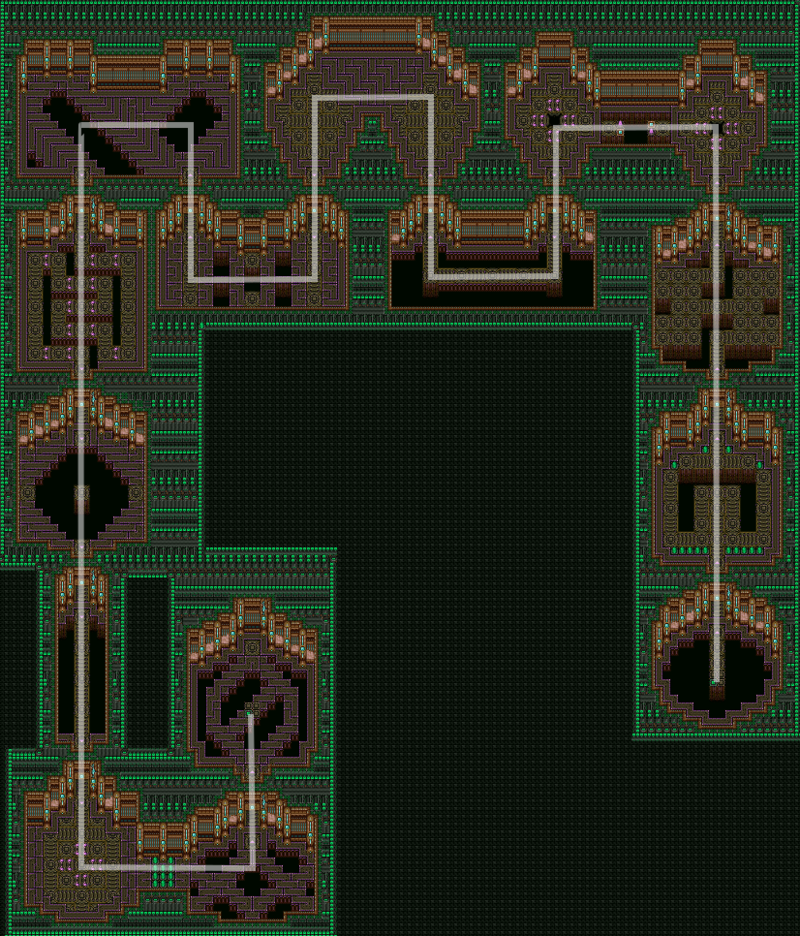 In contrast to the second floor, the third floor is the most linear of the floors. There are no choices to make, but it is also the longest floor in terms of the distance you have to cover. The third floor also introduces one last new enemy: the Terminator. Terminators are assailants that resemble the Armored Men, but in gold. They are worth quite a lot of experience points, and aren't particularly harder than other enemies that you've faced.

Once you are prepared, proceed... 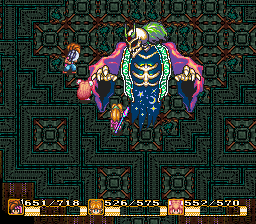 Thanatos reveals his true form when his plan to take over Dyluck's body fails. With 6666 hit points, it will take a lot of power to defeat him. If you are well below level 70, you may find this battle to be a bit too much of a challenge. Striking the lich with physical attacks is possible, but it takes very careful timing and placement, or you're likely to miss.

Dark Lich is weak to light (Lumina) magic. This can be very difficult, considering that your main healer (Girl) can only use it. Lucent Beam isn't cheap either at 8 MP. Sprite can only use other magic spells that isn't dark (Shade). You can spam Lucent Beam (at max level) and burn through Faerie Walnuts, but this places you at risk for later on since you need the Girl's magic for the next battle. The Dark Lich itself has very high physical defense, so spamming Acid Storm can work wonders here. If you wish to play this safer and minimize the use of Lucent Beam, have the girl cast supportive spells instead.

When Dark Lich is in underground mode where his hands and head are showing, please be very careful not to get near that area. His clenching fist is his most powerful attack that will leave any of your members unconscious. The Lich will eventually return back to its first form. This is the perfect time to charge up an attack for the Boy. You can deliver a powerful charged attack and hit the Lich now but this places a risk of getting hit or you can wait until the Lich reappears and unleash the charged attack. The girl and sprite should stay away and cast quick spells from a distance.

When you beat the Lich, the tower will begin to shake.

Before reaching the exit, you are able to prepare beforehand.

You'll instantly return to the exterior of the fortress and notice that a very large version of Flammie, known as the Mana Beast, is coming to destroy the fortress. But it won't stop with the fortress. If it succeeds, it will continue on to destroy the world, and you can't allow that to happen. So you are forced to raise your weapons against the Great Mana Beast. 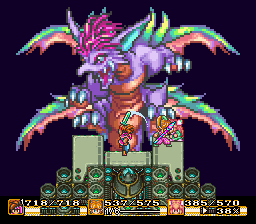 The Mana Beast alternates between an offensive phase and a vulnerable phase. In the offensive phase he is nearly impossible to hit, and has the potential to do great damage to you by flying across the screen, or transforming into a great spiraling fireball. In the vulnerable phase, he slowly rises from the bottom of the screen, or drops from the top, and holds his position for a brief moment, allowing you to strike him before he takes off and prepares to attack you again. You must use this opportunity to inflict as much damage as you possibly can. The way to do that is slightly revealed in the process of the story.

All forms of magic have three spells except for Dryad's. But due to defeating Thanatos, Dryad's seal was removed, unlocking the third spell: Mana Magic. Both the Girl and the Sprite gain access to this spell. The Boy must equip the sword, and both the Girl and the Sprite must cast this spell in order to awaken the true power of the Mana Sword near-simultaneously. The Boy's sword will glow, and he will have the ability to do substantial damage to the Mana Beast. If you want to increase the odds that each hit does the most damage it can, have the Girl cast Moon Energy on the Boy to guarantee critical hits against the Mana Beast. Lunar Boost isn't a bad choice either.

The Mana Beast will use Lv. 8 Wall on itself early in this fight, so using magic against it is impractical. It's weak against Light magic, so Lucent Beam will hurt it, though you will only have 1 shot at using it. Even so, save your magic points to empower the Boy to strike the Mana Beast for maximum damage. Once you do 9999 points of damage to it, it will be defeated, and you will have saved the world. Congratulations.