Back in Northtown, return to the building where the resistance is run from. Krissie will be waiting by the entrance. Krissie informs you that the emperor is calling for a truce. Both of Krissie's companions are excited by the prospect for peace. They ask you to come with them to the castle, and they go on ahead. Exit the cafe, and head north to the castle.

As soon as you arrive in the castle, you have no option but to head through the front entrance. You will need to navigate a series of hallways, usually containing soldiers who claim the emperor is expecting you. They direct you down the correct path, but when you reach the dining hall, you will wonder where everyone is. The emperor stands at the top. Speak with him, and he very quickly reveals his true intent: the crush the resistance and the Mana Knight.

You will then find yourself in a small cell with the members of the resistence, who lament their naive trust in the emperor. If you talk to the guard on the other side of the cell, he will let your three characters out, but not the resistance members. Then he will push you all into a pit where you will be forced to fight a monster. 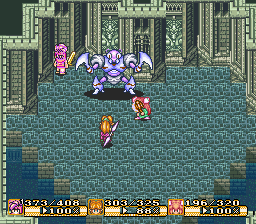 Metal Mantis is a tough boss with plenty of hit points, but no particular strategy is especially effective or required to beat him. He moves about the pit, swinging his arms in order to attack anyone who is standing close to him. He also uses his arms as a defense to shield himself from attacks. He also has the ability to engulf opponents in flame. Use your weapons when he is open, and use spells to take him out even faster. 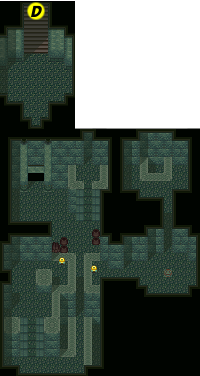 When you defeat him, you'll obtain a Glove orb. Then a tile will appear in the middle of the room. Step on it to be transported out of the pit. From where you arrive, run to the left, and use the little yellow creatures to hop over the gap, and then follow the path as it winds around to the top. You'll see a chest up some stairs which contains 1000 gold. Collect it, and then head through the exit to the left. In the next room, you'll encounter three Embermen. Embermen are like drops, in that they can multiply as you remove some of them, to a maximum number of three at a time. 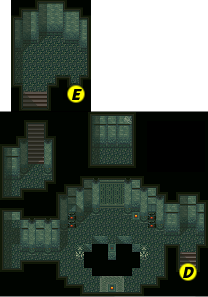 Clear the Embermen out of the way, and climb the steps. You'll return to the room with your cell. It appears that after you defeated the Metal Mantis, the guards left to get help. Step on the yellow tile by the cell door to open it and free the resistance members. Then head left and make your way up the next flight of steps. You'll run into three more Embermen. Remove them and exit out through the door in the lower right corner.

You'll find yourself outdoors, passing through a exit guarded by two Armored Men. After clearing them out, you can head down the steps, and you will be just outside of the front entrance. The path back to Northtown will be closed off. Instead of heading through the front entrance, continue to the right and climb the steps. Fight your way past more Armored Men, and step inside through the door.

After collecting these valuable items, return to the front entrance of the castle, and head inside. (Refer to the maps at the top for this portion of the walkthrough.) As you climb the first set of stairs, you will encounter a Dark Ninja. They like to cast elemental magic on their weapons. Defeat the one you see before choosing a staircase to take. The right staircase is the one you took on the way to reach the emperor. Taking this time will ultimately dead end in the dining hall, so it'snot worth investigating. Instead, climb the left staircase, and follow the path around until it leads to a door in the lower left corner. 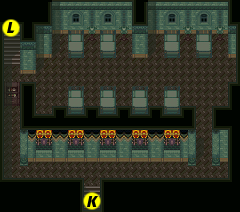 This will lead you back outside. Head down and immediately inside the door you encounter below. Inside the room are a pair of Dark Ninjas, and a Mystic Book. Fight your way to the top, and step on the small red switch. A door will appear in the wall. Step through it and continue on the path, fighting a Dark Ninja on your way to the next staircase. You'll arrive in a large room with the option to head left or right. The left path dead ends at a cupboard, so head to the right instead, and move up into the beded region beyond. Fight your way past several Armored Men and make your way to the stairs on the left. 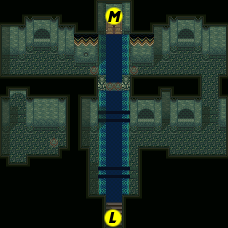 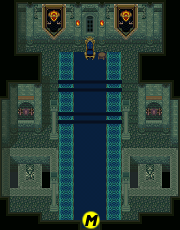 Climb the stairs and you'll be greeted by a Dark Ninja in the next room. As you head straight up, you'll encounter some tiles, but if you step on them, you'll get rejected and bounce back. Follow the path to the right, and step on the next tile you come to. You'll be transported to the other side of the wall from the entrance to the room. If you head left and up, and back to the right, you'll find that you get rejected from the next tile as well. You'll have to look for a way through.

It's very subtle but on the wall by the left tile is a little switch. If you hit it will your weapon, you'll hear a click. This click means you can now step on the tile without getting pushed back. Run through the door above, and you'll advance to the top of the next room, where you'll encounter the Emperor. Gehstar will be there and he will ask for another chance to fight you. The Emperor agrees, and you will be transported to the roof of the castle. 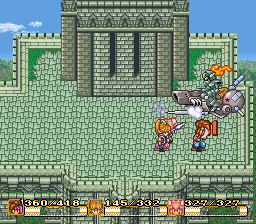 The second fight against Geshtar and his Mech Rider is a lot like the first in Kakkara desert. The only difference is that you have a lot less vertical room to maneuver. The Mech Rider can be a little difficult to hit with phsyical weapons, so powered up offense magic is always a better option. Lure him up and down to a particular height until you have no more room to escape, and then watch out for the bike as it speeds along the room. Then run to the other side and reset. Attack while he tries to line up with you, and send him flying.

You'll obtain a Javalin orb for defeating Geshtar. In his anger, he will decide to burn the entire castle down, with you at the top. All hope seems lost until you hear a sound. You will realize that King Truffle has come to your rescue. Run to the right to speak with him. He will explain that Flammie brought him there. And he will give you Flammie's favorite toy, a drum. Using that drum will summon Flammie to your position at any time. Then he will use it, and Flammie will come swooping down to pick you all up. Truffle would like you to return him to Mantango, which is Southwest of your location.

Go to top
← The Empire | Imperial Castle | The Palace of Darkness →