Return to see Luka as Jema instructed. When you get there, she will inform you that the Water Seed was stolen while Undine was weakened. She believes the seed was taken below Gaia's Navel. Head back to the Dwarf Village.

Before you proceed, make sure you visit Watts and have him upgrade any weapon that you possess orbs for, such as the bow. Then head down to the area near the bottom of Dwarf Village. The elder will be standing before a hole, wondering what could have made it. Jema will be standing by as well. He will inform you that the thieves are below, and they intend to hit the Underground Palace as well. Head down into the hole to explore the Thieves' Ship.

The deck of the ship contains nothing special besides the stair case that drops down to the floor below. Climb down, and you will be in a small circular hallway. A treasure chest in the upper right corner will contain a whip orb. Collect it, and step through the doors at the top.

You will stumble upon a group admiring the Water Seed. They will notice you, and the boss will introduce themselves as the Scorpion Army. He explains that they took the seed to power their robot "Kilroy." Then they will abruptly turn around and pass through the doors above. Follow them into the next room. 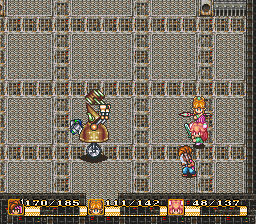 The thieves will send Kilroy to attack you. However, something will malfunction, and they will be forced to remove the seed as a power source. The fight will begin. Kilroy moves somewhat slowly around the room. He attacks with two long hammers. In addition to doing damage, these hammers have the ability to transform your team into Moogles. The Moogle status only lasts a few seconds, but during that time you are vulnerable and unable to attack. As usual, use the girl's Undine magic to heal any wounds that your party receives. If you want to use attack magic, stick to Undine's Freeze spell, as Kilroy isn't as affected by Gnome's Gem Missile and Earth Slide is more expensive.

Once Kilroy's health is cut in half (around 450 hit points) he swaps his legs for a wheel, and he travels around a bitmore quickly. He becomes a little harder to get away from in this state. Continue to attack him (targeting a spot around his wheel) until he loses the rest of his health and is defeated. You will obtain the javelin orb, and then the thieves will simply walk away, leaving the water seed behind.

You will now be responsible for returning the seed (requiring you to head back to the Water Palace again.) Before you leave, be sure to stay at the Inn in order to save your game. On your way out, visit Watts to upgrade the whip and javelin. Once you do this, all of your weapons should be at least level 2, with the sword and spear up to level 3. Consider using the Travel Cannon to return to the Water Palace.

When you return to the palace, you may be surprised to find Iffish swimming around the water, and you may even encounter an Ice Thug outside the palace entrance. Fight past them and head inside. In the main hallway, you'll discover more Ice Thugs walking about.

Continue to the top to reach Luka. Unfortunately, when you get there, she will be surrounded by Empire soldiers. She will warn you to escape. Geshtar will introduce himself, and demand you give him the seeds. If you try to run, you will be captured anyway. He will put the seed on the alter, and then leave. You will now be faced with a boss fight. 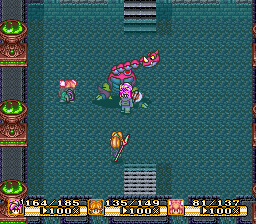 The Jabberwocky is a large beast with two heads. It primarily attacks by swinging his heads around on necks that stretch. It also has some dangerous attacks like a level 3 Acid Storm and a Poison Gas attack. There isn't a tremendous amount of strategy to this fight beyond hit it as hard as you can, as fast as possible. Gnome's attack magic is a little more effective than Undine's. When you reduce its health in half (around 475 points), it will lose one of its heads. This actually makes the fight a little easier.

When you defeat the Jabberwocky, you will receive the bow orb. Then return to the top to speak with Luka. Inexplicably, Jema will be there waiting as well. He will explain that the empire's been driven back, even in Pandora, and he will give you a whip orb. Luka will instruct you to seal the seed with your sword. Once you do, she will tell you to find Sage Joch in the Lofty Mountains to learn about real courage. Jema will advise you to speak with the Travel Cannon people at Potos to be sent to the Upper Lands, your next destination.

However, before you go, it is highly recommended that you return to the Dwarf Village. You can power up the bow and the whip with the new orbs you got, and receive a special item from the village elder. Speak to him near the bottom of the village, and he'll offer you the Midge Mallet, and item which can undo, or cause, the curse of being shrunk. It will come in handy.