The Great Ace Attorney 2: Resolve/Episode 2: The Memoirs of the Clouded Kokoro 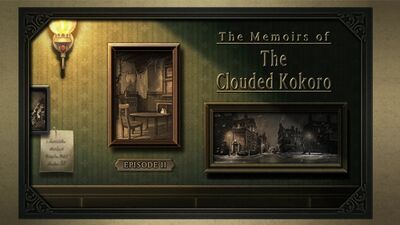 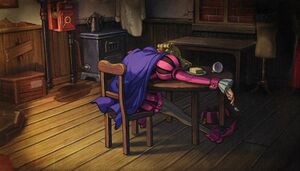 Coming off the heels of an acquittal for Soseki Natsume, rookie attorney Ryunosuke has chosen to represent Soseki in court yet again after he becomes the suspect in the poisoning of an acquaintance.

An acquaintance of the victim's, Soseki's case isn't helped by the fact that he was the last person seen with Shamspeare. He claims that this is yet another result of his haunted lodgings.

An odd man who lives in the same building as Soseki Natsume, and was discovered to have been poisoned the next morning. He claims that this could only have been Soseki's doing.

The prosecutor in this case, Barok van Zieks has appeared against Ryunosuke in every one of his trials since arriving in the country.

Aside from the victim himself, Metermann is the only witness who can attest to the fact that Soseki was alone in the room with Shamspeare, as he was keeping watch outside.

A detective for Scotland Yard, Gregson usually acts as the primary investigator in the cases that Ryunosuke has found himself involved in so far.

The stabbing victim in Ryunosuke's previous case, for which Soseki was the initial suspect. She is an art student who appears to be perpetually negative.

The landlord of William Shamspeare and Soseki Natsume, he rented the rooms to the men for a cheap price due to their otherwise unappealing state.

The wife of the man who runs the company that supplies gas to the building at the center of the case. She also acts as a juror in this case.

Gameplay
Appendices
Walkthrough
The Adventure of the Blossoming Attorney
The Memoirs of the Clouded Kokoro
The Return of the Great Departed Soul
Twisted Karma and His Last Bow
The Resolve of Ryunosuke Naruhodo
Retrieved from "https://strategywiki.org/w/index.php?title=The_Great_Ace_Attorney_2:_Resolve/Episode_2:_The_Memoirs_of_the_Clouded_Kokoro&oldid=913268"
Hidden category: