The Great Ace Attorney 2: Resolve/Episode 3: The Return of the Great Departed Soul 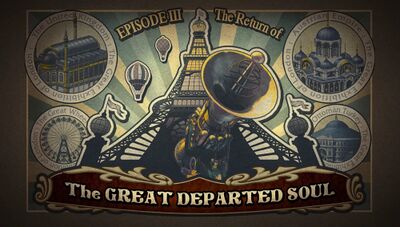 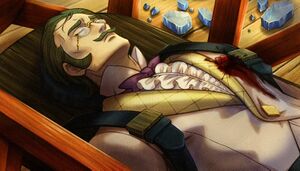 After having spent six months away from the courtroom, Ryunosuke is back to put his skills to the test. He accepts the case immediately due to his eagerness to return, but it may turn out being more than he bargained for.

A scientist with great aspirations, Harebrayne's plans go awry when his experiment leads to an apparent death on the grandest stage in the world. Still, he seems to think that the experiment itself was a success.

The investor behind Harebrayne's experiment, Asman seems to have exhibited so much confidence in the experiment that he was willing to test it himself. Still, there may be more to this man than meets the eye.

The prosecutor in this case, Barok van Zieks continues his rivalry against Ryunosuke. The defendant is an old friend of his, which only makes his decision to take on this case more puzzling.

A former pickpocket, Gina has turned her life around by becoming an apprentice to Inspector Gregson. She witnessed the crime while riding a hot air balloon.

The man who operated the hot air balloons in the space where the experiment took place. He witnessed the crime while operating a balloon that floated above the crime scene.

A Bohemian youth who witnessed the crime while riding a hot air balloon.

A detective for Scotland Yard, Gregson usually acts as the primary investigator in the cases that Ryunosuke has found himself involved in so far.

A mysterious apprentice to Barok van Zieks, making his debut in the courtroom in this case as a judicial assistant for the prosecution. He seems familiar...

The owner of a wax museum in the area, Tusspells is dealing with her own mystery at the moment.

The head of Stronghart's new forensics team, effectively making her the lead investigator in this case. She also performed the autopsy on the victim.

The mysterious engineer behind Harebrayne's experiment.

Gameplay
Appendices
Walkthrough
The Adventure of the Blossoming Attorney
The Memoirs of the Clouded Kokoro
The Return of the Great Departed Soul
Twisted Karma and His Last Bow
The Resolve of Ryunosuke Naruhodo
Retrieved from "https://strategywiki.org/w/index.php?title=The_Great_Ace_Attorney_2:_Resolve/Episode_3:_The_Return_of_the_Great_Departed_Soul&oldid=913360"
Hidden category: