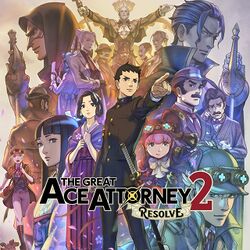 The Great Ace Attorney 2: Resolve (大逆転裁判２ -成歩堂龍ノ介の覺悟-, Dai Gyakuten Saiban 2: Naruhodou Ryuunosuke no Kakugo?) is a sequel to The Great Ace Attorney: Adventures, developed and published by Capcom. Previously released only in Japan for the Nintendo 3DS, it was remade and localized as part of The Great Ace Attorney Chronicles compilation for Nintendo Switch, Windows, and PlayStation 4. Like its prequel, this game takes place one hundred years before you meet Phoenix Wright for the first time.

The gameplay remains largely unchanged from Adventures with one only addition: forensic science in the form of finding handprints. You still have to contend with multiple witnesses, juries and finding your client not guilty in order to win the case.

This time, you'll uncover mysteries through the eyes of not only Ryunosuke Naruhodo, but also Susato and Yujin Mikotoba to ultimately expose the conspiracy between Japan and Great Britain. Like Adventures, this game takes place in the Meiji period in Japan and the Victorian era in Great Britain.