Help the man in the army suit repair the scarecrow.

In this level, there are two main fields. A grassy field with smelly sheep running around in it, and a crop field with crows flying above, a droopy scarecrow, and a man in an army suit. Talk to the man, and he will tell you that he cannot repair the scarecrow, because every time he gets "attacked" by birds. When you have control of Jake again, the man will start to walk slowly towards the scarecrow. Run around him barking, and try to stop the birds from pooping on him. If they do it too many times, he will turn and walk back, and you'll have to start again. When he gets to the scarecrow, run around that as well. Once the scarecrow is mended, the man will call you a "first-class bird dog" and he will "present you with the order of the white bone".

If you go into SOV again, you can see that near the scarecrow is a bone buried in the ground. Dig it up and eat it, then jump over the fence where the man was standing before he went to repair the scarecrow. There is a bone in the middle of the rocks, and another one nearby. The second one is easier to find in SOV, because for some reason only part of it is visible in normal mode. Now eat both the bones. You can look for purple scents if you want to. Most of the scents are in the field with the sheep in it, some of which are in the sheep pen. There are three purple scents on the opposite side of the crop field, around a log. There are also quite a few in the crop field itself. 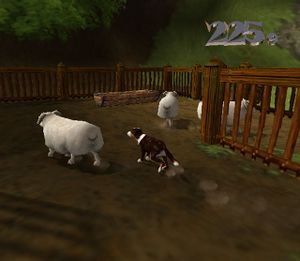 This is the sheep pen you need to get the sheep into.

There is a man standing by the sheep pen (probably the farmer) and if you talk to him, he will tell you that his sheep dog refuses to round up the dirty sheep, and that he wants Jake to get her to do the job. So go back to the crop field and find eight cyan (light blue) scents. They are in a wobbly line going from where the man in the suit was standing to the scarecrow. Get them all, and you can do the digging challenge. A tutorial will come up telling you how to play the game, and then you need to dig five holes. If you beat the Border Collie, go into the field and try to chase the sheep into the pen.

While chasing the sheep, they may seem difficult to control. It takes a bit of getting used to. Basically, if you want the sheep to go right, go to the left, and if you want the sheep to go left, go to the right. Once you've got all eight sheep in the pen, the farmer will give you a bone. Then all the sheep will escape again, because the sheep pen doesn't have a gate. After that, go back into the crop field, and get the eight yellow scents. You can now do the peeing challenge. Winning this one is fairly easy. All you have to do is pee on all the marked areas around the outside of the whole grid. Then, go over any areas where the Collie has gone over yours. Once you've done this, you've won. A bone will appear in the dog bowl.

She's not the most active dog, in fact she spends a lot of time lying down, and that's exactly what she'll do after you beat her in a contest. But try to ignore her laziness when you take control of her and herd all the sheep. She seems to have only been bothered to get 4 bones, so she's pretty easy to beat.

Now eat any bones in the dog bowl, and go into the dog kennel to save the game. Then go onto the road. Turn to face the fence and go right. Keep going along the road, and you'll come to the Chicken Farm.