The Sleeping Bandit's accomplice is guarding the loot.

If it's the first time you've been to this level, you'll be expecting it to look something like the Clarksville Centre. But this is Boom City, so it's mainly full of skyscrapers and such. You remember when the Sheriff in Boom City Station asked you to keep a look out for the Sleeping Bandit's accomplice? Well, he's hiding around this level. If you go to the building right in the middle of the level, you will see some stairs that lead to a balcony. Go up, and when you are about to go around the corner, the camera will move so you can see the bandit, who is possibly awake. Do not go near him because if you do, he will shoot you and Jake will lose health.

Instead, go back down the stairs and go the opposite way of the road leading back to the Park, and you will find a small area where there are lots of orange scents. There is also a bone in the bin, so eat it. Get all eight orange scents, and you'll be doing a Tug-O-War against the local Greyhound. If you win, you can take control of him and you'll be surprised at how much speed he has compared to Jake! He has speed, but if you go near the bandit's assistant now, he'll still shoot you! So instead of doing that, go underneath the balcony (while in control of the Greyhound) and bark continuously, and the man will start to tell you to be quiet. You know he is listening now, so slowly walk around the building clockwise, still barking, and the man will follow you on the balcony. When you get to the end of the balcony, and the man has too, run for it! Don't stop barking until you've gone around the first corner to give you extra time, and then run up the stairs to the balcony, around the corner and pick up the loot bag. The Greyhound will take it to the Sheriff who somehow knew you were there, and he will give you a bone.

He's the fastest dog in the whole game - so fast that the easiest way to use him to help you is to do it when you've just beaten him in the first contest. The Sleeping Bandit's accomplice is guarding the bag of loot... and he's armed with a tranquilizer gun... and he's taking no chances with Jake, because he can't get around to the loot in time... and then it's lights out. Just have over 70 bones and you'll be fine, and don't worry, because he's so kind that he'll run slowly so you can beat him in a race.

You will now be standing next to the road to the park, so go along the road (either way) away from there. Go around a corner, and you will come to another road, so go along it. You will come to a bar building with a man outside sitting on an overturned dustbin. If you talk to him, he will tell you that he lost all his money in a card game and he knew the guy he was playing against was cheating, but he doesn't know how he did it. So it's up to you to find out. If you go into the bar though... Dog Catcher alert! He will turn around in his chair and see you, and then Jake will run out the bar, followed by the Doberman.

While running away from him, try to keep as close to the pavement as possible when going around corners on the road to keep away from the Doberman (because he's really fast) and you should be fine. If you do get caught, the bone will be buried in the area where the orange scents were, in a space where one of the slabs on the pavement has come off. The Dog Catcher will give up trying to catch you (for now) and he will leave the bar. You can now go inside. Go past the counter and the Lucky Seven machine, although you can use it if you want, and go through a door. You will see two men sitting at a card table, and beside the man farthest away from you there will be a deck of cards on the floor. Pick it up and the man will shout, "Hey! Give that back, that's my lucky deck!" The other man will realise he was cheating and they talk for a while (arguing), until they go off for a drink to talk it over. The other man says he never could resist a free drink. Jake will automatically take the money out to the man, and he will give you a bone. Jake will say, "I'm starting to have quite an impressive collection of bones!" So, eat the bone.

Now for one of the most difficult scent collections in the game. The first violet scent is in a flat just down the road from the way back to the park. You can get inside by going up the elevator used by a window cleaner (who isn't around) and then jumping through the window. Just remember to go into SOV. The next one is down in the road, not far away from the elevator. There are some in a line after that, and there is one in each room with a window open that you can reach using the elevators. If you are still missing one, look in the areas that you can get to by knocking part of the fence down. When you have the twelfth one, a bone will appear in the dog bowl next to the bar. If you ran out of time, just try again. 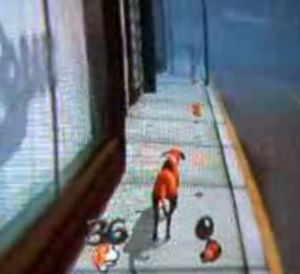 Jake will have to beat the fastest breed of dog.

You can find eight green scents on the road going from the small area where the orange scents were to the bar. When you've gotten all eight, you will be racing the Greyhound. Don't worry though, because he runs slower for the race. The race weaves in and out of the poles holding the balcony up, goes all around the building, weaves around the poles again and then you go to the finish. To save time, you don't have to weave in and out of the poles because you'll probably still have half the treats at the end of the race. If you won, a bone will appear in the dog bowl, so go and eat it.

You will find a bone lying on the pavement next to the bar, so eat that one and then you can look for purple scents. There are loads of them around the road, around six of them on the balcony, and some near the bar. Remember, you can always press

if you are missing some. When you have all fifty scents, a bone will appear in the dog bowl, so go and eat it.

Go into the kennel to save the game, then go along the road back to the park and head towards the gate to the Dog Pound. Jake will run through the gate, but the Doberman barks twice, alerting The Dog Catcher. He will say, "Hey, it's that Clarksville dog. Come back here!", and then you will arrive at the creepy Dog Pound level.